Steps to a Two State Solution: For Israel, for Palestine, for Peace 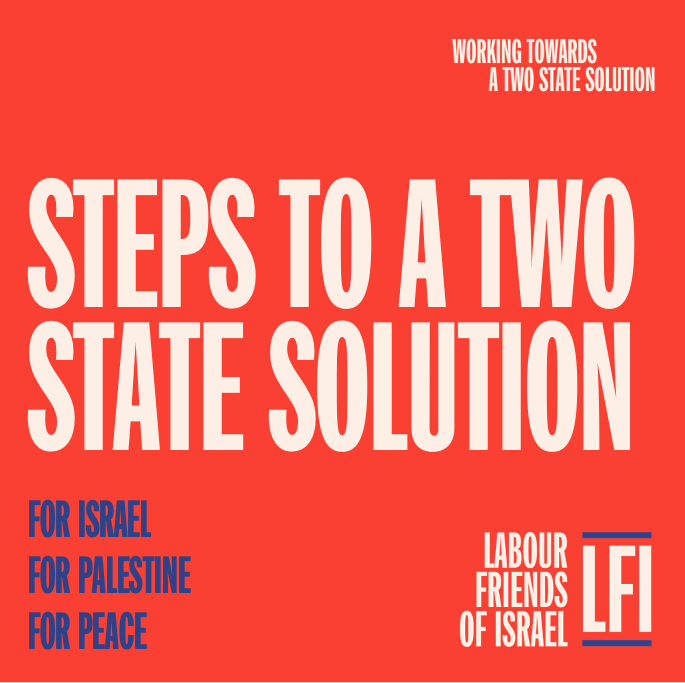 The two-state solution is the only means by which to guarantee Israel’s security and to preserve its identity as a Jewish and democratic state, as well as to satisfy the legitimate demand of the Palestinian people for self-determination and national sovereignty.

It is also the only solution which commands popular support among both the Israeli and Palestinian peoples.

Sadly, a lack of political leadership on both sides and a failure by the international community to support peace-makers in both Israel and Palestine has led to a prolonged hiatus in the peace process.

However, the signing of last year’s momentous Abraham Accords and the continuing process of normalisation between Israel and its Arab neighbours, the arrival of the Biden administration with its renewed commitment to a two-state solution, and the change of government in Israel, opens the door for positive steps forward.

The 30 steps LFI will outline over the coming weeks – political, economic and civil society – are ones which Israel, the Palestinians, the international community and the UK could take in order to preserve the viability, and advance the prospects of, a two state solution. They seek to shrink the boundaries of the conflict, begin the process of rebuilding trust and confidence on both sides, and, crucially, ease the plight of the Palestinian people and expand their rights and freedoms while preserving the security of the Israeli people.

These steps are not exclusive, and nor are they exhaustive. They are designed to be both practical – in terms of offering concrete measures which could make a real difference on the ground – as well as illustrative.

The steps do place demands on all sides, and it is important that the need for action by all players in the conflict is respected, demanded and supported by all those who hope that this tragic conflict may be brought to a close – for Israel, for Palestine, and for peace.

We’ll be putting new steps online on a weekly basis, and there will also be events and publications to accompany this project.

In compiling these steps, we have drawn extensively upon a number of sources, including the writings of Micah Goodman, David Makovsky and the excellent 50 Steps Before the Deal project of the Israel Policy Forum.

30 Steps to a Two State Solution:

Step 3: End the Palestinian Authority’s payment of salaries to convicted terrorists and the payment of rewards to the families of “martyrs”

Step 4: Support the establishment of an International Fund for Israeli-Palestinian Peace and re-establish UK support for peace-building work

Step 6: Increase work permits for Palestinians in the West Bank and Gaza

Step 10: Demand Hamas renounce the use of violence and terrorism

Step 13: Support the development of Rawabi

Step 18: Oppose unilateral actions by either side

Step 20: Support free elections in the West Bank and Gaza

Step 24: Support the reunification of the West Bank and Gaza under PA authority