Step Six: Increase work permits for Palestinians in the West Bank and Gaza 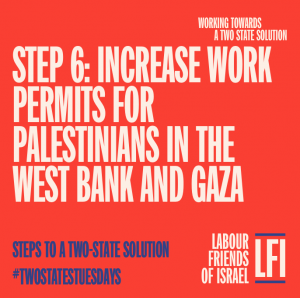 Around 120,000 Palestinians travel to Israel each day to work, with some 87,000 holding work permits and an estimated further 30,000 to 40,000 regularly crossing illegally to seek employment. In August, the new Israeli government announced it had approved the issuing of an additional 15,000 work permits to Palestinians.

Wages are higher in Israel: workers in the Jewish state earn double the amount for the same job. Increasing work permits for West Bank Palestinians – particularly for women and older men – could boost the Palestinian economy and raise living standards, while also enhancing Israeli security. It has been estimated that granting work permits to 400,000 Palestinians would directly impact the lives of more than 1 million people in the West Bank. The IDF leadership is known to support a big increase in work permits.

In Gaza, more than half of the workforce is unemployed, with that figure rising to nearly 70 percent among young people. Prior to the Hamas coup in 2007, 120,000 Gazans worked in Israel. Subsequent rocket and terror attacks that led to the establishment of Israeli and Egyptian restrictions saw that number fall precipitously. Prior to the onset of the pandemic, Israel had issued work permits to around 7,000 Gazans: the highest level since Hamas seized power. Once the situation allows, Israel should resume this policy and issue more permits. With an effort to ramp up vetting, as many additional work permits as possible should be issued. This would assist the economy, help tackle unemployment and ease the humanitarian crisis in Gaza, as well as assisting the process of Israel and Gaza-based terror groups reaching a permanent ceasefire.

Israel allows 5,000 Palestinians from Gaza to enter for work: https://www.i24news.tv/en/news/israel/diplomacy-defense/1577532957-israel-allows-5-000-palestinians-from-gaza-enter-for-work

Quietly, Israel has been letting in thousands of Gaza workers in bid to ease tensions: https://www.haaretz.com/israel-news/israel-quietly-lets-in-gaza-workers-in-bid-to-ease-tensions-1.7923083