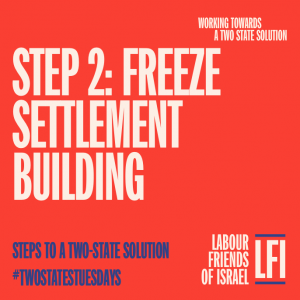 Continued Israeli settlement-building – especially that which occurs beyond the security barrier – represents an obstacle to a two-state solution. Both in public and in private meetings with senior Israeli government representatives, LFI has consistently called for an end to both the construction of new settlements and the expansion of existing ones. Continued settlement expansion undermines trust, weakens the viability of a future Palestinian state and does nothing to enhance Israel’s security. Instead, over the past decade, it was used as a sop by the Netanyahu government to appease the most right-wing elements of its electoral coalition, despite them being utterly unrepresentative of the views of most Israelis. E1, a settler project located outside of Jerusalem in an unbuilt area of Ma’aleh Adumim, which has been repeatedly delayed since it was first proposed three decades ago, represents a particular threat to the contiguity of a future Palestinian state and should be strongly opposed.

At the same time, it is important to recognise that most major Israeli settlements are built close to the 1967 “Green” line within the security barrier that was constructed to stop suicide bombers and terrorists entering Israel during the Second Intifada. Some 77 percent of Israelis who have “settled” beyond the 1967 lines – 84 percent if East Jerusalem is included – live within the security barrier. Indeed, two ultraorthodox settlements inside the barrier —Modiin Illit and Beitar Illit—compromise 30 percent of the total settler population and have accounted for nearly half of the growth of the settler population in recent years. Since the 2000 Camp David summit, the notion of  “land swaps” – exchanging territory on which the Green line-adjacent “settlement blocs” are situated for territory within pre-1967 Israel – has been part of all major peace initiatives and is accepted by Israel and the Palestinians alike.

In 2008, Ehud Olmert, the then Israeli prime minister, suggested an agreement involving five percent of the territory of the West Bank joining Israel with compensating territory from within the 1967 lines behind handed to a new Palestinian state. –Detailed proposals have been drawn up by the Geneva Initiative, a joint Israeli-Palestinian project, to address the issue of settlements as part of ending the conflict.

How many settlers need to be evacuated to make way for a Palestinian state?: https://www.haaretz.com/israel-news/.premium.MAGAZINE-how-many-settlers-need-to-be-evacuated-to-make-way-for-a-palestinian-state-1.6386939

The Settlement Enterprise Has Not Blocked a Two-state Solution: https://www.haaretz.com/opinion/.premium-two-states-possible-despite-settlements-1.5337301