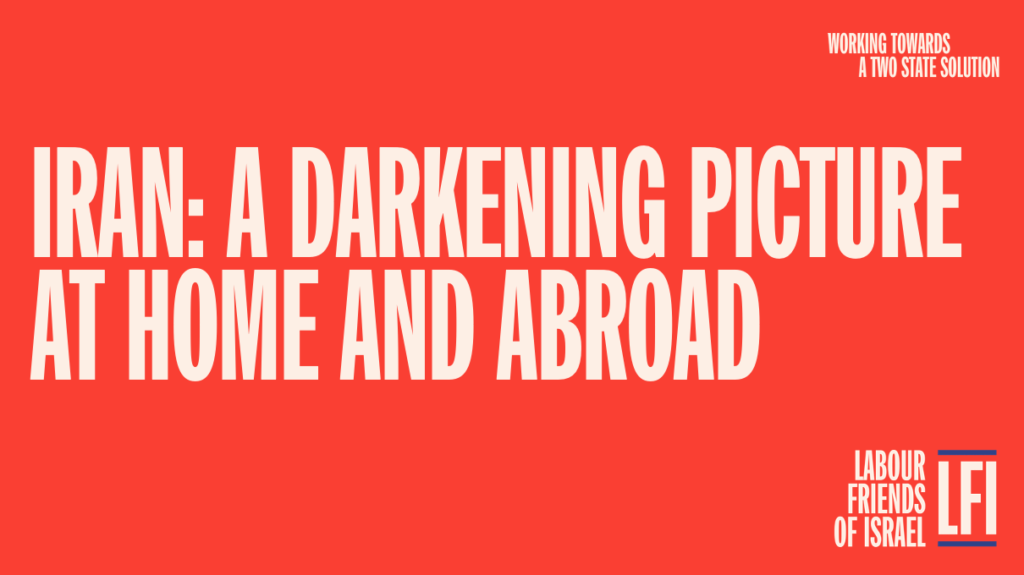 View a PDF copy of our new pamphlet: Iran A Darkening Picture at Home and Abroad

Britain must urgently develop a comprehensive approach to tackling the multi-faceted threat posed by Iran, argues a new report published by Labour Friends of Israel.

Whatever the outcome of the Vienna talks on Tehran’s nuclear programme, major challenges unaddressed by the negotiations – including Iran’s ballistic missile programme, its destabilising regional agenda and support for proxy armies, and the regime’s abysmal human rights record – will need to be confronted.

The report calls for the UK government to undertake a series of steps, including:

Expert contributors to the publication, including Matthew Levitt of the Washington Institute and Kasra Aarabi of the Tony Blair Institute for Global Change, chart Tehran’s domestic and regional agenda and paint a bleak picture with the regime being more repressive at home and confrontational abroad.

Levitt tracks the dramatic expansion over the last decade in the role played by Hezbollah in pursuing Iran’s regional ambitions. While Hezbollah continues to use Lebanon as a base from which to pursue the goal of destroying Israel, it also now works to train a network of Iran-financed Shia militant fighters across the region.

As Aarabi suggests the gap between Ayatollah Ali Khamenei’s radical blueprint for the “next stage of the Islamic Revolution” and an increasingly liberal and secular society will continue to grow. The supreme leader’s loyal protégé, President Ebrahim Raisi, offers a combination of “indifference to violence and devotion to the regime’s Islamist ideology” which are well-suited to imposing this blueprint on the Iranian people and crushing any opposition to it. Key to this task will be Raisi’s alliance with the Islamic Revolutionary Guard Corps whose influence can also be seen in Tehran’s more aggressive regional and foreign policy.

In their contributions, LFI chair Steve McCabe highlights the failure of the government to impose sanctions on human rights abusers, and lists 12 individuals to illustrate this failure, while LFI chair in the House of Lords, Baroness Meta Ramsay, discusses the danger posed by Iran’s ballistic missile programme.

Read the full report here: Iran A Darkening Picture at Home and Abroad