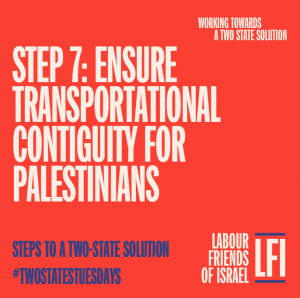 Some 90 percent of Palestinians live in territory in the West Bank – including all of the main towns and cities – which is under the control of the Palestinian Authority (designated Areas A and B by the Oslo Accords). But this land is not contiguous, with Palestinians often living in areas which are surrounded by territory – Area C – in which Israel retains full authority. It is thus when Palestinians travel – to work or to visit friends and family – that they encounter checkpoints and the Israeli military. Pending a final status agreement, Israeli plans – called Keep It Flowing – developed in the early 2000s and subsequently updated would help address this understandable source of Palestinian anger and frustration. A network of roads, tunnels and bridges – which would be under the authority of the PA – would ensure that Palestinians are able to travel freely across and throughout Areas A and B without encountering Israeli-occupied territory, settlements and security.