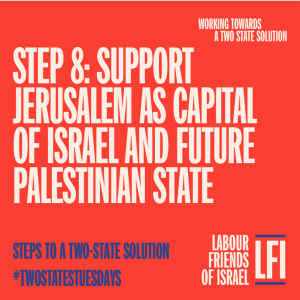 Jerusalem is a holy city for three religions – Judaism, Christianity and Islam – and that status makes it one of the most spectacular – but also tense and politically contested – places on Earth. Both Israelis and Palestinians have legitimate claims to share Jerusalem as their respective capital cities, and access to the city’s holy sites must remain open to all. While Israel has every right to have west Jerusalem as its capital, President Trump’s decision to unilaterally recognise this right was wrong and counterproductive to the cause of peace and a two-state solution. Instead, it is vital to embrace creative and imaginative proposals which can allow both Israelis and Palestinians to share Jerusalem, such as those proposed by Bill Clinton (the so-called “Clinton Parameters” in 2000) or former Israeli prime minister Ehud Olmert in 2008. In the case of the former, Clinton suggested that, in relation to Jerusalem, “The general principle is that Arab areas are Palestinian and Jewish ones are Israeli. This would apply to the Old City as well.” Clinton recommended Israeli control over and access to Jewish holy sites in Jerusalem, including the Western Wall, with Palestinian sovereignty over Al Haram al-Sharif. Olmert’s proposal to Palestinian president Mahmoud Abbas drew on the Clinton parameters. It said that Israel would withdraw from the Arab neighbourhoods of east Jerusalem and an international consortium, including Saudi Arabia, Jordan and Egypt, would be established to work with Israel and Palestine to determine future arrangements concerning the Old City and its sensitive holy sites.

The Palestine Papers: Olmert’s offer to the Palestinians: https://www.theguardian.com/world/palestine-papers-documents/4736