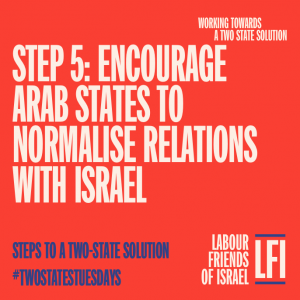 The Abraham Accords – 2020’s agreements between Israel and the United Arab Emirates, Bahrain, Sudan and Morocco to establish diplomatic relations – represent a ground-breaking shift in the relationship between the Jewish state and once universally hostile Arab world. It is the first major diplomatic breakthrough in the Arab-Israeli conflict since Israel and Jordan formally established relations in 1994. The agreements offer a potential host of strategic, economic, social and environmental benefits. They help to counter Iranian regional expansionism, strengthens moderates against extremists, and, suggests a RAND corporation report, an expansion and deepening of the process over the next decade could bring 4 million new jobs and more than $1tn in new economic activity. Beyond trade, stronger bilateral ties between Israel and its new Arab partners offers the opportunity to tackle significant social and environmental regional challenges, such as climate change, desertification and food security, with the Jewish state’s thriving hi-tech industry and R&D centres playing a major role in reshaping the region.

The Abraham Accords process should neither be held hostage to, nor seen as an alternative to progress in resolving, the conflict between Israel and the Palestinians. Indeed, the agreement between the UAE and Israel brought an end Benjamin Netanyahu’s aim to annex parts of the West Bank, preserving the viability of a two-state solution, and thus showing how these processes can complement and buttress each other. As Koby Huberman, co-founder of the Israeli Regional Initiative Group, has suggested, “the new objective” should be a “regional roadmap towards implementing a negotiated regional package deal with the two-state solution at its core”. The diplomatic process, he argues, should be “revised, in order to allow for a gradual, reciprocal, partial and parallel progress in both the Israeli-Palestinian track and the Israeli-Arab states track”, while the Palestinians should be offered “a fresh political horizon” to provide them with “reasonable clarity that the two-state solution is the endgame of the roadmap”. Thus, [Makovsky link] Saudi Arabia – which has indicated that it remains committed to the 2002 Arab Peace Initiative principle that normalisation should follow a resolution of the Israeli-Palestinian conflict – could, for instance, secure a commitment from Israel to halt settlement construction and expansion beyond the major blocs which abut the Green Line in return for a significant increase in Saudi ties with the Jewish state.

The international community should encourage, facilitate and support steps towards expanding and deepening the Abraham Accords process. With its close diplomatic, economic and security ties to both Israel and the Arab world, Britain could play a major positive role, although the failure of the UK government’s 2021 strategic review to make any mention of the accords suggests Boris Johnson is unlikely to seize this opportunity.

The UAE-Israel deal: Like a bridge over troubled sands: https://fathomjournal.org/the-uae-israel-deal-like-a-bridge-over-troubled-sands/

With Netanyahu gone, the Abraham Accords will not only survive, they might even flourish: https://www.mei.edu/publications/netanyahu-gone-abraham-accords-will-not-only-survive-they-might-even-flourish