Step Ten: Demand Hamas renounce the use of violence and terrorism 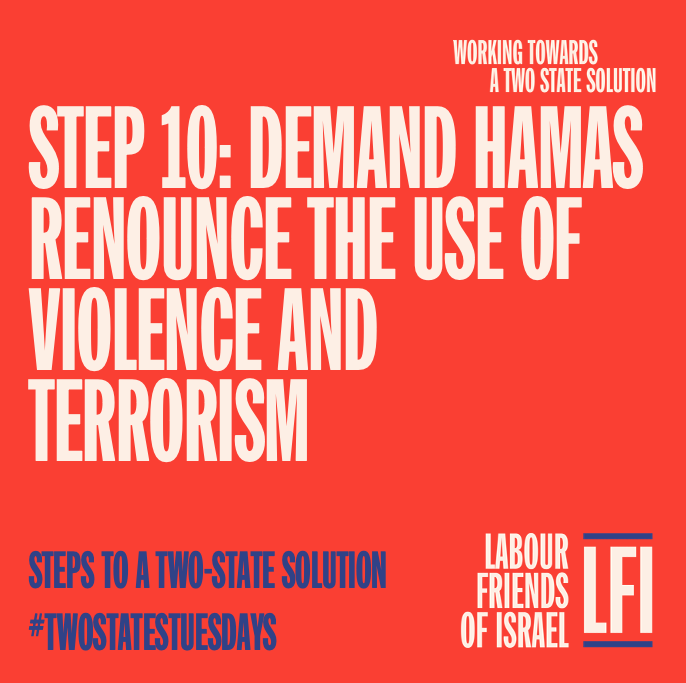 Terror group Hamas is opposed to Israel’s existence in any form, declaring in its 1988 covenant that “there is no solution for the Palestinian question except through jihad (holy war).” Any effort at coexistence by Palestinians is violently opposed, with the group warning that any Muslim who leaves “the circle of struggle with Zionism” is guilty of “high treason”. Hamas instead calls for the creation of an Islamic republic in Palestine that would replace Israel. Muslims should “raise the banner of Allah over every inch of Palestine,” it says. An updated 2017 statement of Hamas’ principles, designed to soften its regional and international image, “does not include any concession on the liberation of all of Mandatory Palestine, let along recognition of Israel”, experts suggest.

Alongside its suppression of the Palestinian people, Hamas has waged a violent terrorist campaign against both Israel and any form of peace process. Its response to the Oslo Accords, for instance, was to launch a suicide bombing campaign against Israeli civilians, killing scores between 1993 and 1997. When Israel unilaterally withdrew from Gaza in 2005, it vowed: “We shall not rest until our entire land is liberated … To the Zionists we promise that tomorrow all of Palestine will become hell for you.” After its violent coup against the Palestinian Authority, Hamas took control of Gaza and has since used it as a base to launch rocket and mortar attacks against Israel and build terror tunnels, with the aim of infiltrating the Jewish state. It has also continued to encourage and execute terror attacks in the West Bank, on occasion targeting the PA. Hamas’ activities were the cause of the 2009, 2012,  2014 and 2021 Gaza wars and the resultant destruction and tragic loss of life. It is imperative that Hamas adhere to the Quartet principles of recognising Israel, agreeing to abide by past diplomatic agreements, and renouncing violence, all of which are enshrined in UN Security Council Resolution 1850. Those regional countries with whom Hamas has good relations – such as Turkey and Qatar – should demand that it does so.

Council on Foreign Relations: What is Hamas?: https://www.cfr.org/backgrounder/hamas