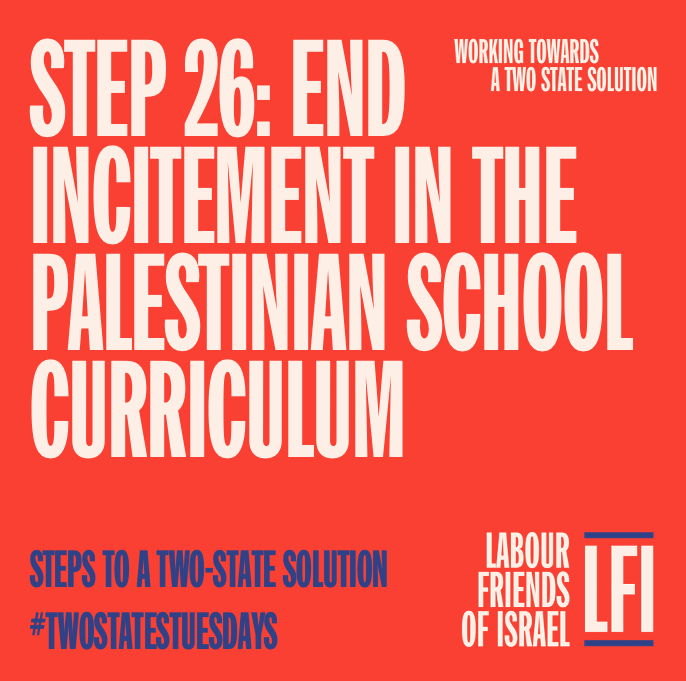 In 2017, the Palestinian Authority introduced a new school curriculum which teaches the virtues of martyrdom, describes terrorists as “heroes” and repeats antisemitic tropes.

The Institute for Monitoring Peace and Cultural Tolerance in School Education (IMPACT-se) has published a series of reports which argue that the curriculum “exerts pressure over young Palestinians to acts of violence in a more extensive and sophisticated manner”; has expanded its focus from the “demonisation of Israel to providing a rationale for war”; and is “more radical than ever, purposefully and strategically encouraging Palestinian children to sacrifice themselves to martyrdom”. A long-delayed report from the Georg Eckert Institute, commissioned by the European Union and backed by the British government, confirmed in June 2021 that the curriculum promotes antisemitism and incitement to violence, celebrates terrorism and jihad, and rejects peacemaking and reconciliation with Israel.

Through the payment of the salaries of PA Ministry of Education civil servants and teachers involved in implementing it, British aid directly helped to support the delivery of the curriculum until 2021. Until then, and despite ministers’ claims, repeated analysis of the successive curricula by IMPACT-se found that problematic content remained in the curriculum and, in fact, the curriculum became progressively worse with each revision since its initial introduction. Ministers have claimed that the decision to end funding was “not influenced” by the Georg Eckert Institute’s report, and the PA has remained resolute in its refusal to reform the curriculum in response to the end of funding.

Palestinian children and young people should not pay the price for their government’s failings, so, rather than cutting aid altogether without reference to incitement in the curriculum, UK aid should instead be redirected to a Palestinian Peace Fund which would invest in education, children’s and youth projects run by NGOs with a proven track record of promoting the values of peace and coexistence. LFI also supports the passage of legislation – such as that introduced in 2019 by our former chair, Dame Louise Ellman – which would mandate that future UK assistance to the PA education system must comply with international values of peace and tolerance.

Time for talking on hateful Palestinian textbooks is over