Step Eighteen: Oppose unilateral actions by either side 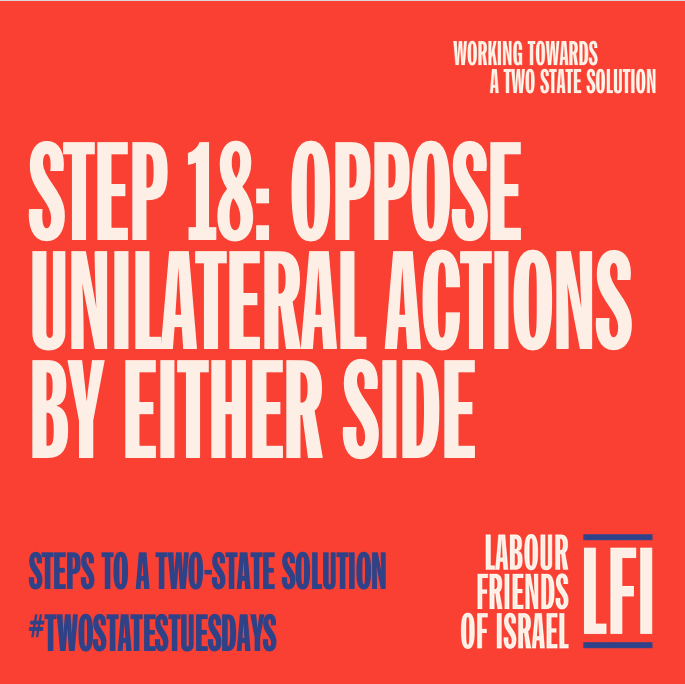 The sole route to a viable, sustainable two-state solution is through a settlement resulting from direct negotiations between Israel and the Palestinian Authority. While Israel was right to withdraw from Gaza, the unilateral nature of this process in 2005 has contributed to the continuing violence and conflict surrounding the coastal enclave. By contrast, negotiations – like those at Camp David in 1978 which led to peace between Israel and Egypt, or those which brought about peace between Israel and Jordan in the 1990s – have proved much more durable. Unilateralism goes again the spirit of the Oslo Accords, which declare: “Neither side shall initiate or take any step that will change the status of the West Bank and Gaza Strip pending the outcome of permanent status negotiations.”

Unilateralism also weakens the peace process by strengthening the position of hard-liners on both sides. This is why – despite Israel’s right to have its capital in west Jerusalem – Donald Trump was wrong to unilaterally recognise Jerusalem as the Jewish state’s capital in 2017. It is also why – despite the fact that the settlement blocs which abut the 1967 Green Lines will inevitably remain a part of Israel following any negotiated settlement – the Netanyahu government was wrong to consider unilaterally annexing parts of the West Bank in 2019-20. Such an action would not only have been harmful to the future prospects of a two-state solution.

Similarly, unilateralism on the part of the Palestinian Authority does nothing to advance the chances of a durable and lasting settlement with Israel. This includes actions such as seeking unilateral statehood recognition from international bodies or individual countries and attempting to “internationalise” the conflict through appeals to bodies such as the International Criminal Court. Indeed, such steps have done little or nothing to improve the reality on the ground for ordinary Palestinians and have instead proved simply a distraction from the vital task of returning to the negotiating table, where both sides will have to make painful compromises and concessions.

Israeli-Palestinian Peacemaking: What can we learn from previous efforts?