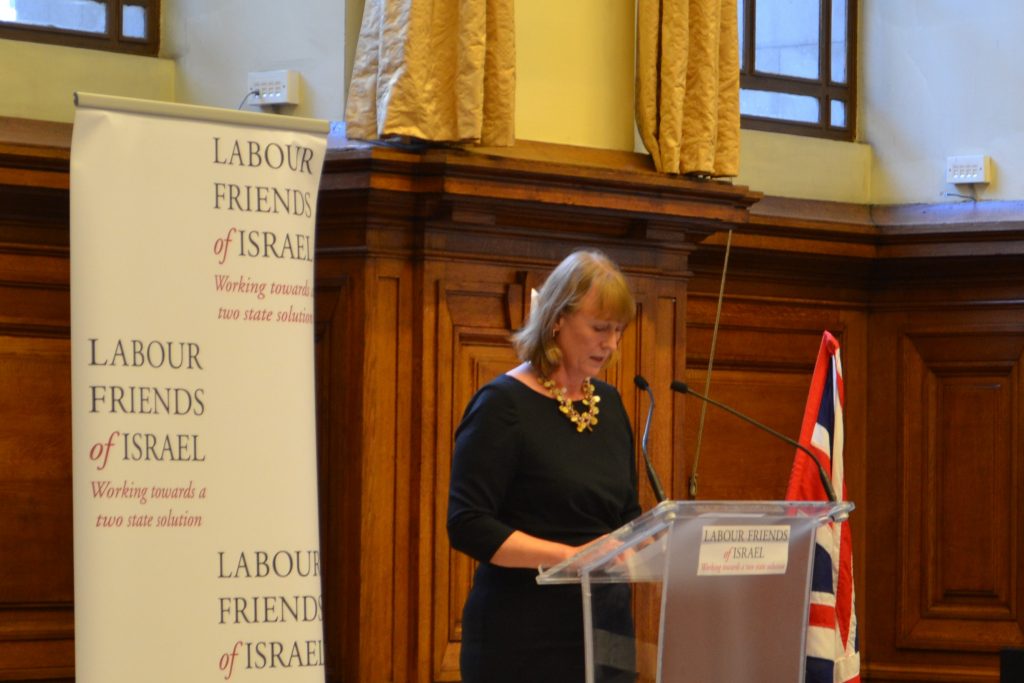 Thank you to all of you for being here today.

In particular, I want to thank Sir David Garrard and Isaac Kaye, our long-standing lunch sponsors.

I also want to thank all of my parliamentary colleagues who have joined us;

Our chair in the House of Lords, Baroness Ramsay, a tireless and staunch friend of Israel who leads our Labour peers with great skill and dedication;

LFI’s vice-chairs not just for being here today, but for the ongoing support and commitment you show to our cause;

Our many, many new Parliamentary Supporters.

And our special guest, the Shadow Foreign Secretary, Emily Thornberry, who brilliantly exposes from the frontbench the dangerous, bumbling incompetence of Boris Johnson.

I want to begin by thanking all of those who have supported our campaign – For Israel, For Palestine, For Peace – over the past year.

In January, I introduced a bill, which won cross-party support, in favour of the establishment of an International Campaign For Israel-Palestinian Peace.

Along with Ian Austin – who has pursued this issue with his characteristic tenacity – I have met with ministers to lobby them for support.

In July, we won our first big breakthrough: a commitment by the government to invest £3m over the next three years in coexistence projects.

A major victory for LFI and its supporters in parliament.

And, more importantly, a major victory for all those working on the ground in Israel and Palestine to further the cause of peace, reconciliation and coexistence.

We have also continued to press ministers to ensure that UK aid to the Palestine Authority supports a two-state solution, and not anti-Semitic incitement.

Last December, the government announced it was looking again at how direct aid to the PA is spent.

Another victory for LFI and its supporters in parliament.

And, more importantly, another victory for all those working on the ground in Israel and Palestine working to further the cause of peace, reconciliation and coexistence.

Over the next year, we will continue to campaign for the government to support peacemakers and to challenge all those who peddle hate, justify violence and terrorism, and, in so doing, poison the minds of yet another generation of Palestinian children and young people.

This year, we have seen a very special anniversary.

Three weeks ago, I represented LFI at the Knesset celebrations to mark the centenary of the Balfour Declaration.

I am incredibly proud of Britain’s role in helping to bring about the world’s first and only Jewish state and equally proud of the part played by my own party.

Labour declared its support for the Zionist cause three months before Balfour’s letter, when it published its War Aims Memorandum.

In it, the party endorsed Jewish claims to settlement in Palestine.

When the Balfour Declaration was published later that year, Labour’s leader, Arthur Henderson, and his successors, Ramsay MacDonald and George Lansbury, welcomed the government’s stance.

And, when others subsequently wavered, Labour kept the faith.

In 1935, Labour’s new leader, Clement Attlee, spoke of the party’s support for “a national Jewish home in Palestine for the Jewish people”.

In parliament, Labour MPs voted against the MacDonald White Paper in 1939, which shamefully attempted to curb Jewish immigration to Palestine at the very moment when European Jewry faced maximum peril.

Labour’s support for Balfour was endorsed by party conferences in the late 1930s and during the 1940s.

Our party’s last war-time conference spoke for many when it declared a “Jewish National Home” was “irresistible” in the face of the “unspeakable atrocities” committed by the Nazis.

When I look at Israel today

– the Middle East’s only democracy,

where free trade unions stand up for working people,

an independent judiciary and press speak truth to power,

and where the rights of women, the LGBT community and other minorities are respected and celebrated –

I believe Labour’s founding fathers would have felt their support for Zionism more than justified.

Which is why modern-day Labour leaders – Harold Wilson, Tony Blair and Gordon Brown – have been among Israel’s staunchest friends.

For some – including in our own party – “Zionist” has now become a term of abuse.

I wear it as a badge of honour.

For there is no shame at all in asserting one’s belief in the right of the Jewish people to self-determination.

We should say so – proudly, clearly and repeatedly.

But we must do more than this.

We must challenge the hateful discourse of anti-Zionism at every turn.

We must expose the lies and half-truths which underpin it out.

And we must call it out for what it is: anti-Semitism pure and simple.

As Abba Eban, one of Israel’s finest public servants and diplomats, put it in 1975 when the UN passed its disgraceful resolution equating Zionism with racism:

“There is no difference whatever between anti-Semitism and the denial of Israel’s statehood.

“Classical anti-Semitism denies the equal right of Jews as citizens within society.

“Anti-Zionism denies the equal rights of the Jewish people its lawful sovereignty within the community of nations.

“The common principle in the two cases is discrimination.”

Frankly, I am ashamed – and we should all be ashamed – of some of the language we have seen used by members of the Labour party when discussing Israel:

The age-old tropes about international conspiracies and Jewish power;

The suggestion that Jews are manipulating allegations of anti-Semitism for their own ends;

And, most pernicious of all, the attempt to link Zionism and Nazi Germany.

Where does this come from?

This is not about statehood for the Palestinians, a cause I support.

It is not about settlement-building, a policy I oppose.

And it is not about the actions of the current Israeli government, with many of which I profoundly disagree.

It stems from a hatred of the world’s only Jewish state, the state of Israel.

A hatred that is as irrational as it is wrong.

A hatred that is as blind as it is mindless.

A hatred that no other nation on earth is subjected to.

And that should tell you all that you need to know about what drives it.

Where does this lead?

– a fringe meeting that was in the official conference guide –

asking the question: “Holocaust: yes or no”.

It leads to leaflets being distributed to delegates quoting the words of Reinhard Heydrich – the architect of the Final Solution.

And it leads to some supporters of the current leadership taking to the airwaves and refusing to condemn Holocaust denial.

Our party does not have a problem with “all forms of racism”.

It has a problem with anti-Semitism.

And we will never be able to confront it until we acknowledge that fact.

This is not a peripheral issue.

It warps the important debate about how a future Labour government can help bring about an end to the tragic conflict between Israel and the Palestinians.

It sullies our party’s reputation and betrays its history.

It strikes at the very core of what our movement is about and should offend the conscience of every Labour party supporter, member and elected official.

Anti-Semitism must be rooted out from every dark corner of our society.

Chief Rabbi, if I may briefly borrow a few words from you:

“Anti-Semitism is not just a problem for Jews;

it is a problem for all of our society.”

So, let us begin with the challenge closest to home.

Our party – from its leadership to its grassroots – needs to address this problem decisively and urgently.

We must acknowledge and apologise for the fact that we have fallen far short of the standards that should be expected from a party that aspires to lead this country.

We must agree and enforce clear red lines about where legitimate criticism of the Israeli government morphs into anti-Semitic anti-Zionism.

We must reject the fiction that prefacing a statement with the insulting words “I accept Israel’s right to exist” makes anything and everything that follows somehow acceptable.

We must steadfastly oppose the BDS movement, which exists solely to demonise and delegitimise the world’s only Jewish state.

And we need this battle to be led by the leader of the Labour party.

Let me close by making you this pledge:

However long it takes,

However lonely the fight may be,

And whatever the criticism we face,

We will not rest until the scourge of anti-Semitic anti-Zionism is removed from our party.