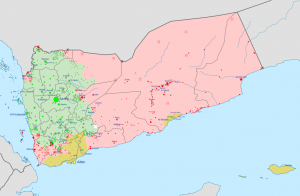 Palestinian terror groups including Hamas and Palestinian Islamic Jihad received sharp criticism from Gulf states over the weekend due to their condemnation of Saudi airstrikes in Yemen.

Saudi Arabia, the UAE and Bahrain launched scathing attacks on the Palestinian groups for their alleged support of the Iranian-backed Houthi militia in Yemen, which recently launched drone and missile attacks on Saudi Arabia and the UAE.

Tensions between the Palestinians and Gulf states have been escalating since the Abraham Accords normalised relations between Israel, the UAE and Bahrain in 2020.

In an interview with Hezbollah-affiliated Al-Mayadeen television on Friday, senior Hamas official Mahmoud Zahar denounced Saudi Arabia and the UAE as “Arab Zionists” who were committing “crimes” against the people of Yemen.

Like the Houthi militia, which has been fighting the Yemeni government since 2014, Hamas and PIJ receive Iranian funding, arms and support.

The Palestinian Authority itself, led by president Mahmoud Abbas, has thus far avoided commenting on the airstrikes, apparently in an effort to avoid exacerbating tensions with the Gulf states.