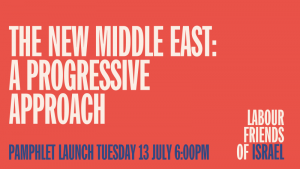 LFI this week launches a major new publication on the changing shape of the Middle East. From demographic changes to diplomatic revolutions, and the growing threat posed by an expansionist Iran, The New Middle East: A Progressive Approach is designed to contribute to the evolution of Labour’s foreign policy development.

Look beyond Israel: principles for a progressive foreign policy

Opening the pamphlet, Steve McCabe surveys the massive changes which have swept the Middle East over the past decade: the Arab Spring, the Syrian civil war and the rise of Islamic State, Iranian expansionism and last summer’s ground-breaking Abraham Accords.

“Seeing the Middle East solely through the prism of the tragic conflict between Israel and the Palestinians distorts and narrows our perspective; crucially, it also prevents us from engaging with current realities in the region,” warns LFI’s chair.

With a general election still several years away, Labour does not need a detailed prescription for how in government it would handle every issue facing the region, McCabe believes. Instead, he argues, it should, adopt a series of principles as it begins to develop its thinking. These might include:

In her contribution, LFI’s chair in the House of Lords, Baroness Meta Ramsay, says Labour can learn from Joe Biden’s balanced and constructive approach to the Middle East.
His campaign for the presidency and his approach since taking office “demonstrate a progressive, pro-Israel agenda which Labour should study carefully as it seeks to craft its own policies towards the Middle East,” she argues. She cites in particular the president’s handling of the recent conflict between Israel and Hamas. “In place of rhetorical grandstanding, the president used his credibility with the Israeli government to engage in quiet diplomacy thus helping to broker a ceasefire” she suggests. “His rejection of megaphone diplomacy may not bring the acclaim of social media, but it delivers results.”

The threat from Tehran

A major theme of the publication is the need for progressives to recognise the threat posed by the Iranian regime and to respond accordingly.

The Abraham Accords: not all about trade

Moran Zaga examines the huge potential strategic, economic and environmental benefits presented by the Abraham Accords. According to a RAND report published this spring, an optimistic scenario, based on a deepening of regional economic ties and integration, might lead to an additional $1tn in economic activity over a decade. But, beyond trade, Zaga notes, strengthened bilateral ties between Israel and its regional neighbours offers the opportunity to tackle significant social and environmental regional challenges, such as climate change, desertification and food security. She also raises the prospect of such ties promoting greater religious tolerance, people-to-people collaboration (including between Jewish and Arab Israelis), and potentially greater liberalisation in the Gulf states.

Emman El-Badawy’s chapter focuses on demographic changes in the region, highlighting the fact that two-thirds of the Middle East’s population is now aged 35 or younger.

“The choice of comrades”

Gary Kent, secretary of the All-Party Parliamentary Group on Kurdistan, uses his chapter to argue that Labour should seek to adopt a policy of consistency towards human rights abuses. He cites Italian politician and novelist Ignazio Silone’s phrase – “the choice of comrades” – to suggest that “Labour, in opposition and in government, should, of course, talk with governments, but we should also seek to amplify the views of allies and like- minded actors.” “These should include the likes of trade unionists, Saudi women’s activists and Iranian dissidents,” Kent argues. “We should support self-determination, talking about the impact of Israel’s occupation on the Palestinian people. But we should also talk about Hamas’s atrocious human rights abuses, especially towards women and LGBT people, and the Palestinian Authority’s heavy-handed attitude towards dissent and journalists.”

John Lyndon and Huda Abuarquob of the Alliance for Middle East Peace use their chapter to argue for the establishment of an International Fund for Israeli-Palestinian Peace. LFI has led the campaign in the UK for the fund, which is modelled on the highly successful International Fund for Ireland, and which would invest in peace-building work in Israel and Palestine.