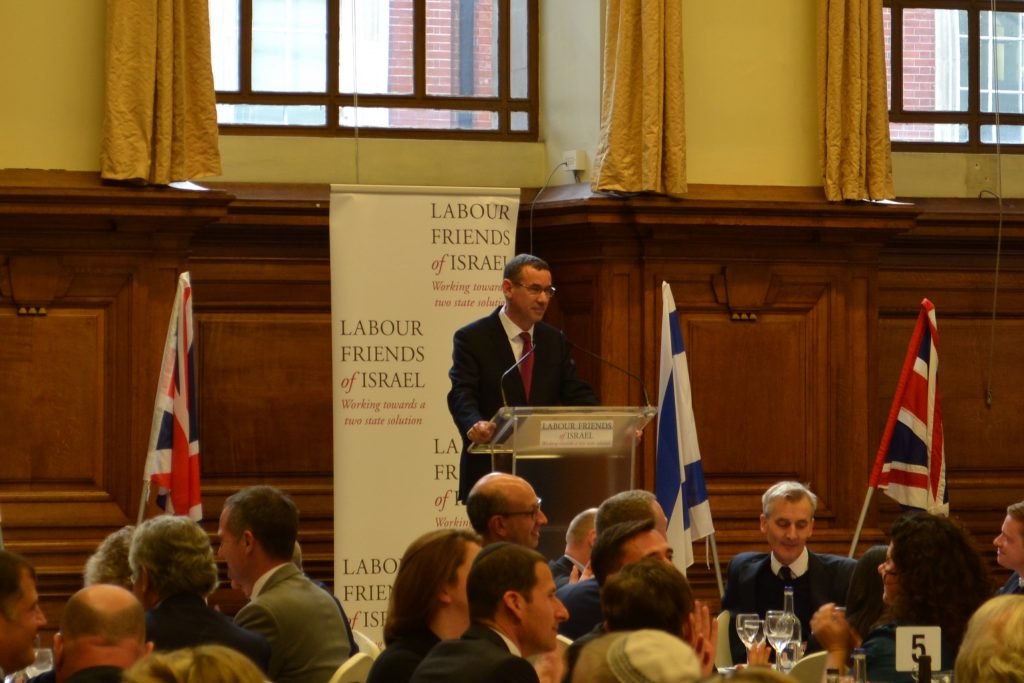 It is a real pleasure to be back here at Central Hall for LFI’s Annual Lunch.

I would like to begin by thanking your Parliamentary Chair, Joan Ryan, and the entire LFI team for all that they did to put this event together;

And for all that they do, yearlong.

Thank you very much.

And it is a special pleasure to be here with the Shadow Foreign Secretary, Emily Thornberry, so soon after her trip to Israel earlier this month.

Emily, during your time in Israel you met with Avi Gabbay, the new leader of Israel’s Labour Party.

I would like to take this opportunity to personally thank you for reaching out, and for strengthening the ties between the labour movements in both our countries.

We have just celebrated the centenary of the Balfour Declaration:

But, of course, you all knew that already.

Maybe you didn’t know this:

Labour’s own policy of that same year went still further:

It was even more pro-Zionist than the Government of David Lloyd George.

Labour called for the establishment of a ‘free state’ for the Jewish people to return home to.

In the decades following 1917, Labour continued to proudly embrace Zionism, endorsing my people’s journey from statelessness to sovereignty.

After Israel achieved independence in 1948, it was the British labour movement that called for the fledgling Jewish state to be formally recognised by Britain.

And I have with me a copy of one such motion, from the Manchester section of the Constructional Engineering Union;

This statement from December 1948 expressed deep concern for the young Jewish state, which was defending itself against the combined Arab aggression by the armies of Lebanon, Syria, Jordan, Iraq and Egypt;

And it called upon the Foreign Secretary to recognise Israel:

A year and a half before the British Government formally decided to do so.

So to all of the Unite members here with us today, may I say on behalf of the State of Israel:

The truth is, support for Zionism has been central to the ideological heritage of the British labour movement.

That is why I welcome – as I am sure all of you here welcome too – the statement by the Shadow Foreign Secretary earlier this month:

That there is no place – no place – in the Labour Party for those who deny Israel’s right to exist.

Many of you will have seen in recent weeks reports in the media of Israel’s warming relations with Arab countries:

This is good news.

It offers hope to a deeply troubled region;

And it offers hope to my people, who seek an end to the conflict that has plagued us for far, far too long.

I recognise that the Labour Party shares this desire for peace;

But a genuine peace must be grounded in reality, not a mirage.

The sad fact remains, not all those who champion Palestinian statehood seek peace with Israel.

Even here in London, I myself have heard the venomous cries, ‘from the river to the sea, Palestine will be free.’

These people are not talking about peace;

They are calling for the destruction of my country, plain and simple.

Let me be clear:

A Palestinian state that does not recognise the Jewish state is no solution.

It would only serve as a vehicle to further perpetuate the conflict.

So I urge Labour to avoid the temptation of rushing towards quick fixes that ignore realities;

Just as I urge Labour never to express solidarity with those whose aims are diametrically opposed to the peace and reconciliation we all seek.

Next year, my country will celebrate seventy years of independence;

When we do so, we will not forget the historic support given over the decades by the Labour Party here in Britain;

We will not forget the solidarity of British workers, British trade unions, and the wider British labour movement;

Just as we will continue to cherish the support and solidarity shown by all of you here at Labour Friends of Israel.

Thank you all very much.