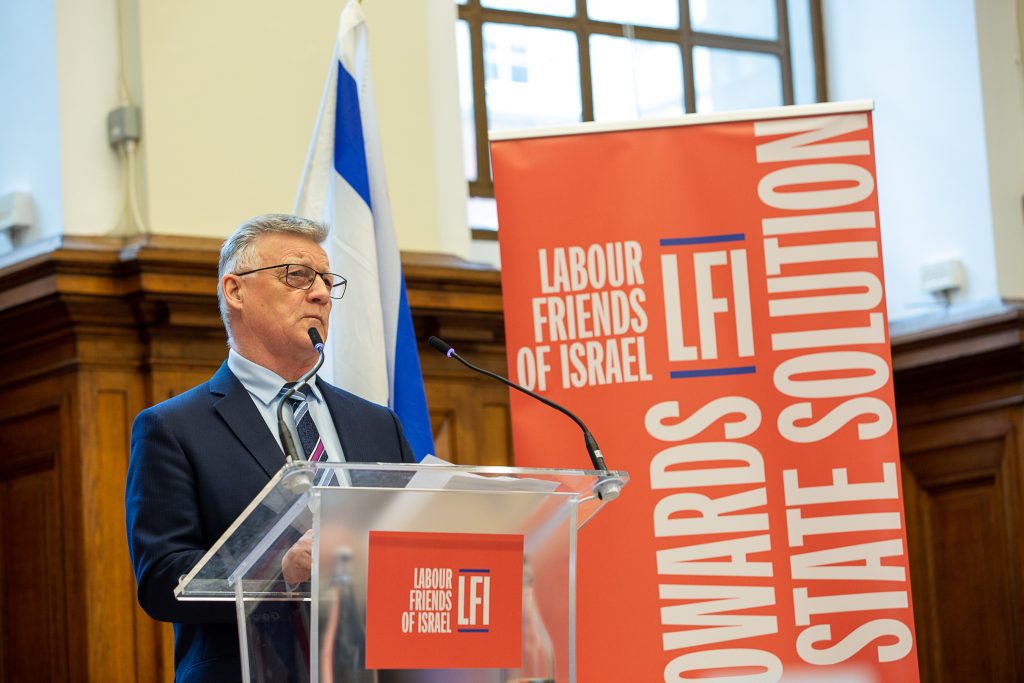 It is my great pleasure to welcome you to the Labour Friends of Israel Annual Lunch.

We wouldn’t be here today without the support of many of you in this room. LFI’s work is more vital than ever, and your generosity makes that work possible.

A special word of thanks must go to our long-standing lunch co-sponsors, Sir David Garrard and Isaac Kaye.

Sir David and Isaac are great friends of Israel and of LFI.

We are sorry that medical advice prevents them from being here today, and we send them our very best wishes.

I know that I speak for everyone in this room when I say how disturbed I was to see what happened at the LSE last week.

Universities are a place for debate, disagreement – and, yes, peaceful protest.

But the kind of behaviour, threats, intimidation that we witnessed – the effort to prevent the ambassador of a key British ally from speaking – are totally unacceptable.

Can I thank all my parliamentary colleagues who have joined us.

Special thanks to our chair in the House of Lords, Baroness Ramsay, a staunch and dedicated friend of Israel who leads our Labour peers with great skill and determination.

And LFI’s vice-chairs and parliamentary supporters, not just for being here today, but for the continuing support and commitment you show:

I am also delighted that two of my predecessors as chair of LFI, Joan Ryan and Louise Ellman, are with us today. Joan and Louise led LFI through the most difficult period in our history with courage and a deep commitment not just to this organisation’s principles but to our party’s principles.

And finally, can I thank our special guest for being here and giving us back our Labour Party – the leader of the Labour party, Keir Starmer.

We are also joined today by some of those brave people – former members of our party’s staff – who publicly stood up and called out antisemitism in our ranks.

So, I ask today that we begin by showing our appreciation to all those in this room who stood up against the disgrace of anti-Jewish racism in the Labour party.

Thanks to Keir’s leadership, we’re now turning the page on a shameful episode.

We’re working to make Labour once again a home for the Jewish community,

A home for friends of Israel.

And for all those who believe in the politics of decency and tolerance.

Labour is coming home to its traditional beliefs and values.

Our commitment to the right of the Jewish people to self-determination. Our commitment to Zionism. As stated nearly 100 years ago at the time of the 1922 general election: “The Labour party has always recognised in the Zionist movement a striving for democratic justice.”

Over the past five years, “Zionist” has been bandied around as a term of abuse by people who loudly proclaim a commitment to anti-racism.

Being a supporter of the national movement of the Jewish people is the essence of anti-racism. That’s why I support the cause of Zionism. That’s why LFI has stands shoulder to shoulder with Keir in the battle to rid Labour party of anti-Jewish racists.

Our work isn’t yet done. At the heart of leftist antisemitism is anti-Zionist antisemitism, an ideology fomented in Stalin’s Russia. An ideology which mixes Medieval tropes with perverse left-wing fantasies and results in no more than support for, and freedom to voice, the world’s oldest hatred.

It has nothing to do with the justice of the Palestinian cause. It has everything to do with delegitimising and demonising the State of Israel and Jews around the world who rightly look to it as a source of pride and inspiration.

Anti-Zionist antisemitism has no place in our Labour party. LFI will work relentlessly to make that a reality. We’ll oppose BDS movement and reject the apartheid smear. We’ll constantly challenge, the distorted, over-simplified, one-sided obsession with Israel. A morally objectionable, grossly inaccurate narrative which does nothing to expose the true source of violence, fear and hatred in the Middle East from terror groups like Hezbollah and Hamas, and their paymasters in Tehran.

It does nothing to further the cause of peace, reconciliation, or a two-state solution.

Ours must be a message of hope, a message about the realities of Israel: A safe haven for Jewish people born out of the tragedy of the Shoah. A bulwark for democracy in the Middle East. A state where women, the LGBT community and other minority groups live their lives free from oppression and fear.

As President Biden said, there is no contradiction between being a progressive and a friend of Israel.

In LFI, we see no contradiction in being a progressive and supporting a country with civil rights as part of its founding values as set out in the Declaration of Independence.

No contradiction in supporting trade unionists who work with Jewish and Arab Israelis to build a fairer, more just society.

No contradiction in supporting our colleagues in the Israeli Labor party, led by the inspirational Merav Michaeli, who are helping to usher in a new era of hope and optimism.

The Middle East is changing. Young people want to see an end to the autocracies and theocracies which have paralysed the region’s politics. Old foes are putting aside past enmities through the Abraham Accords to expand trade, tackle the climate emergency and confront terror and extremism.

And, peacebuilders are seeking to bring Palestinians and Israelis together in a spirit of reconciliation and coexistence.

Through our focus on the progressive case for Israel, our project on the new Middle East, and our unwavering advocacy of a two-state solution, LFI will carry these messages to our party and beyond.

Next week, LFI launches a major new campaign setting out steps towards a two-state solution. It’s based on the simple premise that Israel’s security and character as a Jewish, democratic state – and the legitimate right of the Palestinian people to self-determination – are bound together.

We believe that only the establishment of an independent, democratic and viable Palestinian state – alongside an Israel safe and secure within recognised borders – can achieve the long-term peace and security we all hope for.

We reject the counsel of despair which suggests that the absence of a political process means we can’t make progress. We should encourage all sides to undertake positive, incremental steps which can narrow the parameters of the conflict and contribute to an eventual and lasting settlement.

It offers opportunities to Israelis and Palestinians alike but requires action from both sides too:

It demands action on settlement building;

An end to incitement in the Palestinian school curriculum and the payment of “salaries” to convicted terrorists;

And urgent action to tackle the humanitarian crisis in Gaza with an emergency infrastructure plan for improving energy supplies, sanitation and clean water.

It calls for a halt to unilateral actions by Israel and the Palestinians;

And the international community to encourage other Arab states to normalise relations with Israel and deepen the Abraham Accords.

And it supports the reconstruction and revitalisation of Gaza and a drive towards Palestinian economic independence;

The negotiation of a permanent Gaza ceasefire;

And – a long-standing LFI goal, which has received a massive boost and an infusion of millions of dollars from the US Congress – the establishment of an International Fund for Israeli-Palestinian Peace.

Labour supports this but alas the Johnson government is once again dragging its heels.

These are just some of the steps we’ll be outlining in the coming months.

We hope this realistic and balanced approach can be a contribution to the quest for peace and help the UK Labour Party as it develops policy towards the Middle East and maybe one day even form the basis of a conference resolution designed to achieve something positive rather than simply blame and condemn.

We have spent the last five years on the defensive, fighting anti-Zionism and antisemitism, opposing those who set out to trash some of Labour’s most cherished principles and beliefs.

That battle isn’t over yet but we are ready to contemplate the future. A future under Keir Starmer. A future with our progressive friends in Israel. A future where we seek to strengthen ties Britain and the world’s only Jewish state.

That’s the cause which unites us and brings us here today.

Thank you again for your support.