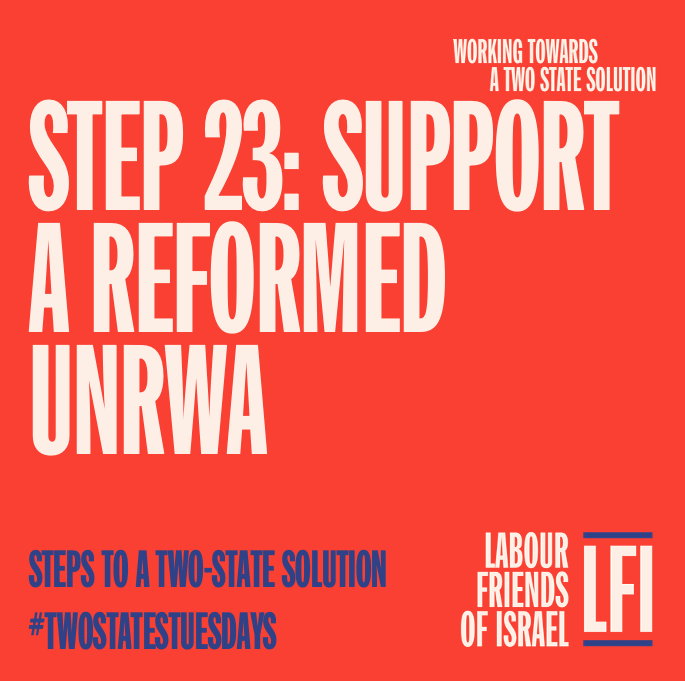 The plight of Palestinian refugees is both tragic and a recurring obstacle in the search for a two-state solution. Established in 1949, the United Nations Relief and Works Agency for Palestine Refugees in the Near East (UNRWA) has an important role to play in providing much-needed education, health care and social services for the Palestinian people. Its original mandate – to provide “humanitarian and development” goals “pending a just and lasting solution” – clearly remains unfulfilled.

In order to meet its goals, and support two states for two peoples, UNRWA must receive the funds it needs. That is why LFI strongly opposed the swingeing and arbitrary cuts imposed by the Trump administration and welcomes Joe Biden’s decision to restore over $500m in assistance to the Palestinians, the majority of which has gone to UNRWA.

We also support the president’s determination to secure reform of UNRWA. The principal focus of reform should focus on two main areas of concern.

First, there have been consistent and legitimate questions about UNRWA’s complicity in incitement to violence and terrorism. In 2009, for instance, a former legal adviser to the agency, James Lindsay, wrote that UNRWA has “taken very few steps to detect and eliminate terrorists from the ranks of its staff or its beneficiaries, and no steps at all to prevent members of organisations such as Hamas from joining its staff.”

Over a decade later, serious concerns about the content of textbooks provided for Palestinian schools by UNRWA – which deny Jewish rights and refute Jewish connections to holy sites in Israel – continue to be voiced. Indeed, last year, a report by the Institute for Monitoring Peace and Cultural Tolerance in Education concluded that “hateful content remains in UNRWA self-learning materials”.

Second, after the 1948 war, there were approximately 750,000 Palestinian refugees (from 1948-1951, as many as 800,000 Jews were expelled from their native Arab and Muslim nations or forced to flee as a result of state-sponsored anti-Zionist violence). However, UNRWA’s definition of a Palestinian refugee – one that is not automatically used for other refugee groups, including those assisted by the UNHRC – includes the patrilineal descendants of those 750,000 refugees. This means that the number of Palestinian refugees, according to UNRWA, has risen from 750,000 to over 5.5 million over the past 75 years.

UNRWA’s expansive definition of a refugee, and its support for a total “right of return” to Israel which includes the children, grandchildren and great-grandchildren of those who were displaced following the 1948 war, is harmful to the cause of peace. Palestinian refugees should primarily settle in a future Palestinian state in the West Bank and Gaza, as has been accepted in past peace negotiations.

An unequivocal “right of return” to present-day Israel would destroy the prospects of two-state solution by severely undermining the viability of Israel as a Jewish and democratic state. It would also end Israel’s vital role as a safe haven for Jews worldwide. Promoting maximalist positions, such as the “right of return”, also does nothing to prepare the Palestinian public for the difficult compromises they – and, in other areas, the Israeli people – must accept if future negotiations are to come to a successful conclusion.

Instead, individual cases of family reunion should be supplemented by an international compensation fund. Referring to his own birthplace of Safed in northern Israel, the Palestinian president, Mahmoud Abbas, has captured well the principle which should guide future progress: “It’s my right to see it, but not to live there.”

UNRWA should also press the plight of Palestinians who live in neighbouring Arab states and who are – for political and historical reasons – frequently denied the basic rights of citizenship. In Lebanon, for instance, Palestinians are forbidden to work in more than 70 qualified professions or to own property, and are subject to certain travel restrictions.

US official: Israel ‘enthusiastic’ about Biden’s restoration of aid to Palestinians

Palestinians in Lebanon: ‘The world has forgotten us’