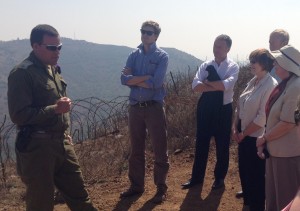 The Labour delegates, 29th September to 4th October, explored how to strengthen the bilateral strategic defence relationship; discussed how we can support each other against common challenges; and were briefed on the threats facing Israel as well as the security challenges in the Palestinian territories.

In addition to the Israeli defence minister, the delegates held meetings with Labor MK Hilik Bar, chair of the Knesset all party group for two states, Secretary General of the Israeli Labor Party and Deputy Speaker of the Knesset; Dr Boaz Ganor and former Head of Mossad Shabtai Shavit and other security experts at Herzilya’s International Institute for Counter-Terrorism; they were briefed on the security situation in Syria and northern Israel by an IDF major on the Golan Heights; visited Rafael Advanced Defense Systems to learn about the Iron Dome; and they had briefings with Israeli Brig. Gen. (ret.) Michael Herzog on the threat of Iran, and at the West Bank security barrier to discuss the challenge of safeguarding Jerusalem and Israeli towns overlooked by the West Bank hills.

The delegates also travelled to Ramallah to meet with Palestinian Deputy Prime Minister Ziad Abu Amr, visited the Rawabi city construction site, the largest private sector project in Palestinian history, and met with US and British officials responsible for training Palestinian security forces. They were also hosted by the Deputy British Ambassador for discussions about bilateral relations and the peace process, with security experts and journalists. 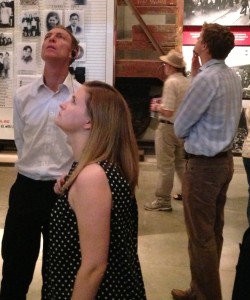 In addition, the delegates toured the holy sites of the Old City of Jerusalem and visited Yad Vashem to pay their respects and learn about the horrors of the Holocaust.

“Each time I go to the region there is a change in the tone of the debate. On previous visits, the preoccupation has been how to best achieve a two state solution between Israelis and Palestinians but during this visit the conversation was different. There was a hope on both sides that the John Kerry process will lead to something meaningful but there was also huge prominence for what is happening on Israel’s borders.”

“A country that over the decades has faced traditional military and security threats from other states is now being confronted with the prospect of terror on most, if not all and each of its borders. On top of that, the conversation about Iran’s nuclear ambitions becomes ever louder.”

“This is the first LFI delegation to have focussed exclusively on security and I know that the entire delegation found the visit fascinating.” 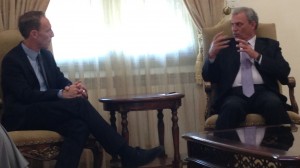