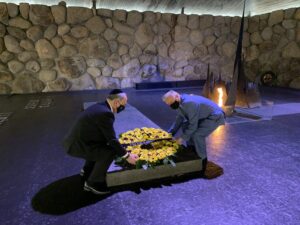 The shadow minister for the Middle East and North Africa, Bambos Charalambous, is with Labour Friends of Israel on a delegation this week – his first visit to the region since his appointment last November.

He is being accompanied by LFI chair Steve McCabe. They will also both be speaking at Chatham House’s Sixth UK-Israel Strategic Dialogue Conference in Tel Aviv later this week.

Due to the pandemic, it is LFI’s first delegation to Israel since 2019.

“Our country’s relationship with Israel is hugely important both to the Labour party and to the UK as a whole,” Charalambous said as the delegation drew to a close today. “The busy itinerary left me with a deeper understanding of Israeli perspectives, as well as the opportunities and challenges faced by the broader Middle East region.”

“I have had important discussions about the work of people-to-people groups, economic ties and innovation, relations with the Arab world, Israel’s security concerns, the path back to a peace process, as well as reaffirming the importance of our sister relationship with the Israeli Labor party,” he suggested.

Charalambous added: “I made clear that the Labour party remains steadfast in our commitment to a negotiated two-state solution based on international law and human rights, with a safe and secure Israel alongside a sovereign and viable Palestinian state”

McCabe and Charalambous met with Israel’s deputy foreign minister, Idan Roll, on Monday. They discussed the peace process, the Abraham Accords and the threat posed by Iran. Roll, who is a member of the centre-left Yesh Atid party and close to its leader, Yair Lapid, also outlined the priorities of the “unity” government which took office last summer. Roll has been charged with leading the government’s effort to rebuild bridges with the US Democratic party, which were strained during former prime minister Benjamin Netanyahu’s decade in power. 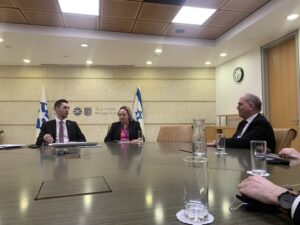 At a meeting with Israeli Labor MK Emilie Moatti and international secretary Michal Biran, Charalambous and McCabe discussed the strengthening ties between Labour and its sister party. Labour leader Keir Starmer has worked to rebuild the relationship between the leadership of the two parties, which was suspended under his predecessor.

During the delegation, Charalambous underlined Labour’s commitment to peace-building work by visiting the MEET coexistence project in Jerusalem. Founded in 2004, it is an educational initiative that delivers an intensive three-year programme focused on technology, entrepreneurship and leadership. During the visit, Charalambous and McCabe met with young Israeli and Palestinian alumni of MEET to hear about the coexistence programme and how it changed their perspectives. At last year’s LFI annual lunch, Starmer endorsed the International Fund for Israeli-Palestinian Peace which aims to boost investment in peace-building projects such as MEET.

The delegation also visited the Peres Centre for Peace and Innovation in Tel Aviv. Founded by the late Israeli president, Shimon Peres, it develops and implements programmes focused on promoting a prosperous Israel, nurturing and highlighting Israeli innovation, and paving the way for shared-living between all of Israel’s citizens and lasting peace between Israel and its neighbours.

Charalambous and McCabe’s visit also focused on the security challenges facing Israel. They were briefed by Professor Boaz Ganor, founder and executive director of the International Institute for Counter-Terrorism, and met with Abie Moses, national chairman of the Organisation of Victims or Terrorism. On a tour of the northern border with Lebanon and Syria, they visited Kibbutz Misgav Am, were briefed on the security situation, and visited a Druze village.

The delegation also visited Yad Vashem where Charalambous and McCabe participated in a wreath-laying ceremony. They also met with the editor of the Times of Israel, David Horovitz.

Speaking of his first delegation since becoming LFI chair in April 2020, McCabe said: “It is fantastic to be leading the first delegation of Labour parliamentarians to Israel since 2019 this week. I’m pleased that newly appointed shadow Middle East minister, Bambos Charalambous, is with us to witness first hand Israel’s security challenges, reaffirm our ties with our sister party, Israeli Labor, and recommit to renewing the longstanding friendship between the Labour party and the Jewish state.”

He added: “We have also had the opportunity to learn about the progress being made by Israel’s new government, particularly following the ground-breaking Abraham Accords, as well as giving our support to progressives on the ground campaigning for peace and a two-state solution.” 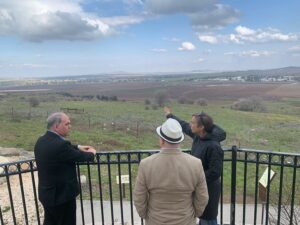