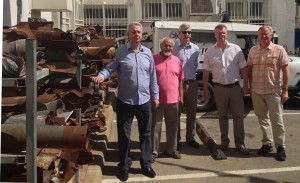 Delegates at Sderot police station, where rockets fired at Sderot from Gaza are stored

During the visit, the MPs held a range of meetings with senior British officials about UK expenditure in the Palestinian territories; Israeli officials and practitioners of MASHAV, Israel’s Agency for International Development Cooperation; and Israeli and Palestinian doctors working and training together in Jerusalem.