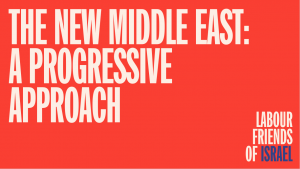 Labour Friends of Israel director Michael Rubin has written the below article for LabourList. Click here to read the original.

For those of us on the left who support Israel and want to see the forces of peace, progress and moderation advance in the Middle East, the last decade was without doubt a dispiriting one. Benjamin Netanyahu took office as Israel’s Prime Minister in 2009 and was still – albeit tenuously – clinging to it as the decade drew to a close.

In the region more widely, the hopes of the ‘Arab Spring’ were swiftly snubbed out and gave way to the carnage of the Syrian civil war, the rise of IS and Iranian expansionism. And at home, the Labour Party’s constructive and balanced approach towards the conflict between Israel and the Palestinians began to fray after we left government in 2010. By 2019, the party was mired in the scandal surrounding antisemitism within our ranks – one in which the former hard-left leadership’s obsession with the world’s sole Jewish state played a central role.

Thankfully, the new decade has opened with some rays of light on all three fronts. Most recently, the new Israeli government – with our sister parties Labor and Meretz both back in power where they belong – offers the chance of a fresh start after the toxic and enormously damaging Netanyahu era. Domestically, under the leadership of Keir Starmer, Labour is returning to serious thinking on foreign policy and working to restore trust with the Jewish community and our friends in Israel. And, perhaps most significantly, the signing of the Abraham Accords last summer brought out of the shadows the ever-growing partnership between Israel and an alliance of pragmatic Arab states. This partnership has the potential to transform the region, including through breathing new life into the Israeli-Palestinian peace process.

The recent tragic round of violence between Israel and Hamas reminds us of the urgency of working towards a negotiated two-state solution; which remains the only sustainable and just solution to the conflict between Israelis and Palestinians. But the core of Labour Friends of Israel’s new publication The New Middle East: A Progressive Approach, which is released this week, isn’t about Israel and Palestine.

For too long, the foreign policy debate, especially on the left, has been dominated to an obsessive degree by this tiny slither of land between the Jordan River and the Mediterranean Sea. Not only has this disproportionate focus on the world’s only Jewish state done absolutely nothing to bring the prospect of peace closer – indeed, we would argue that the obsessive demonisation of Israel actively undermines peace – it has also meant that there has been insufficient attention paid to the region as a whole and the significant shifts taking place within it. We have published this pamphlet to highlight some of these developments, which seldom hit the headlines or receive parliamentary attention. Central to so much of our understanding of the Middle East in 2021 is the threat posed by Iran, which is too often not fully appreciated.

As one of our contributors, Michael Herzog of the Washington Institute for Near East Policy, outlines, this threat is multi-faceted. Iran’s nuclear ambitions are well-known. Until Donald Trump’s ill-judged and counterproductive attempts to sabotage it, the original 2015 nuclear agreement significantly rolled back Iran’s nuclear programme. But it did so only for ten to 15 years. After this, a series of ‘sunset clauses’ expire and effectively allow Iran to ultimately become a nuclear threshold state, capable of swiftly crossing the threshold towards nuclear weapons at a time of its choosing.

Such a development would undoubtedly trigger massive regional instability and a nuclear arms race, in which Saudi Arabia and possibly other nuclear powers would seek to match Iranian nuclear capabilities. Working to prevent nuclear proliferation in the Middle East should thus be a key priority for Labour’s regional policy. US President Joe Biden’s desire to return to the 2015 agreement and then build a “longer and stronger deal” is thus the right one.

That agreement, as Biden has made clear, needs also to address non-nuclear issues such as Tehran’s continuing effort to establish itself as the dominant regional power – a long-term strategic goal illustrated by the drive to create a contiguous zone of direct influence from historical Mesopotamia and the Levant towards the Mediterranean. The dire consequences of this effort to hold sway over a vast swathe of territory, directly or through proxies such as Hezbollah and the Houthis, is all-too-evident in Iraq, Syria, Yemen and Lebanon.

Over the last couple of years we have seen periodic protests in Iraq and Lebanon, initially focused on economic hardship but swiftly widening into opposition to Iran and its local puppets. These protests underline the fact that, as director of the Middle East Centre for Reporting and Analysis Jonathan Spyer has suggested: “In reality, the Iranian system most resembles a colonial one, in which the ability of local populations to decide for themselves disappears and an Iran-controlled structure places itself in rule over them. This rule is then conducted in a manner intended to benefit Tehran, with indifference to the economic and other interests of the subject population.” Opposing such colonialism, and allying ourselves with its victims, stands in a proud Labour tradition and should be another priority for our party.

With the election last month of Ebrahim Raisi, a conservative hardliner, as Iran’s next president, we can expect all of these challenges to grow. His appalling human rights record also underlines the need for us to think much more about how we can provide practical and moral support to the Iranian regime’s many domestic opponents, who have spent four decades living under one of the world’s most oppressive regimes.

The last year has, of course, brought one further piece of good news: Biden’s ejection of Trump from the White House. As we launch what we hope will begin a conversation on the British left about what a genuinely progressive approach to the Middle East could look like, the Biden administration provides – as Baroness Ramsay illustrates in her chapter – a practical and contemporary model for Labour to aspire to and learn from.