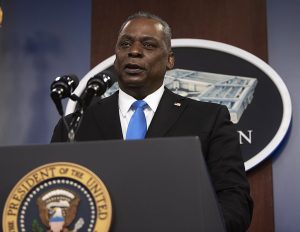 Austin tweeted that the US is committed to working closely with Israel, particularly on security and “threats posed by Iran”. He did not mention Iran or its nuclear programme on the visit, however.

The visit marked the first time a member of Biden’s cabinet has visited Israel since the US began indirect negotiations to re-join the 2015 Iran nuclear deal last week.

Following their Monday meeting, Netanyahu and Austin gave a joint press briefing, at which Netanyahu warned against the “fanatical regime in Iran”.

Austin reinforced that American relations with Israel are “central to regional security in the Middle East”, adding that he had lobbied for a meeting with Israeli leaders in the early days of the Biden administration.
Austin also visited Yad Vashem, the Israeli Holocaust memorial, and met with Israeli defence minister Benny Gantz on Sunday.

The visit came as Biden approved the sale of a large arms deal with the UAE, including advanced F-35 aircraft, worth some $23 million. The deal was signed in the wake of Israel’s normalisation deal with the Gulf country in August 2020.