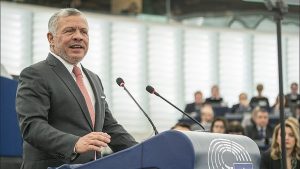 Israel’s border with Jordan has witnessed a flurry of official crossings in recent days, as several senior Israeli politicians have visited the Hashemite kingdom ahead of Ramadan.

The Jordanians reportedly requested an easing on security restrictions in Jerusalem to facilitate worship and prevent escalations, such as those which preceded the May 2021 conflict between Israel and Hamas.

Tuesday similarly saw defence minister Benny Gantz meet Jordanian king Abdullah II in Amman, in which Gantz outlined the steps Israel would take to guarantee Palestinian freedom of worship during Ramadan, as well as other moves intended to improve the lives of Palestinians in the West Bank and Gaza Strip.

Israeli president Isaac Herzog is also expected to visit Jordan this week for a public meeting with Abdullah to “deepen Israeli-Jordanian relations, maintain regional stability with an emphasis on the upcoming holiday period” and “strengthen peace and normalisation”, Herzog’s office said.

In a rare move, Herzog’s visit was announced in advance, a contrast with a secret meeting between the heads of state in September, which was only disclosed after the fact.