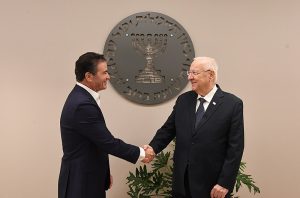 Prime minister Benjamin Netanyahu announced on Monday that David Barnea would be the next director of Israel’s Mossad espionage agency.

Mr Barnea, 56, is a veteran of the organisation, having been its deputy head for the past two years. Barnea will replace incumbent director Yossi Cohen on 1 July.

Netanyahu declared that Barnea’s top task would be “to prevent Iran from acquiring nuclear weapons”.

Barnea’s career includes service as a combat soldier in the elite Sayeret Matkal commando unit and having worked in the Mossad for 25 years.

The announcement has been delayed for months, with Netanyahu first indicating he had chosen a replacement in December last year. The delay was caused by legal questions over whether an interim government could appoint a Mossad director.

Yossi Cohen, the outgoing director, wished Barnea “all success in the post” and said he was “convinced the incoming Mossad director will do great things and will continue to lead the Mossad to operational successes and meaningful achievements”.

Rivlin said that Barnea’s “diverse and impressive abilities” meant he “had no doubt that you will lead our excellent Mossad members with professionalism, wisdom and courage”.