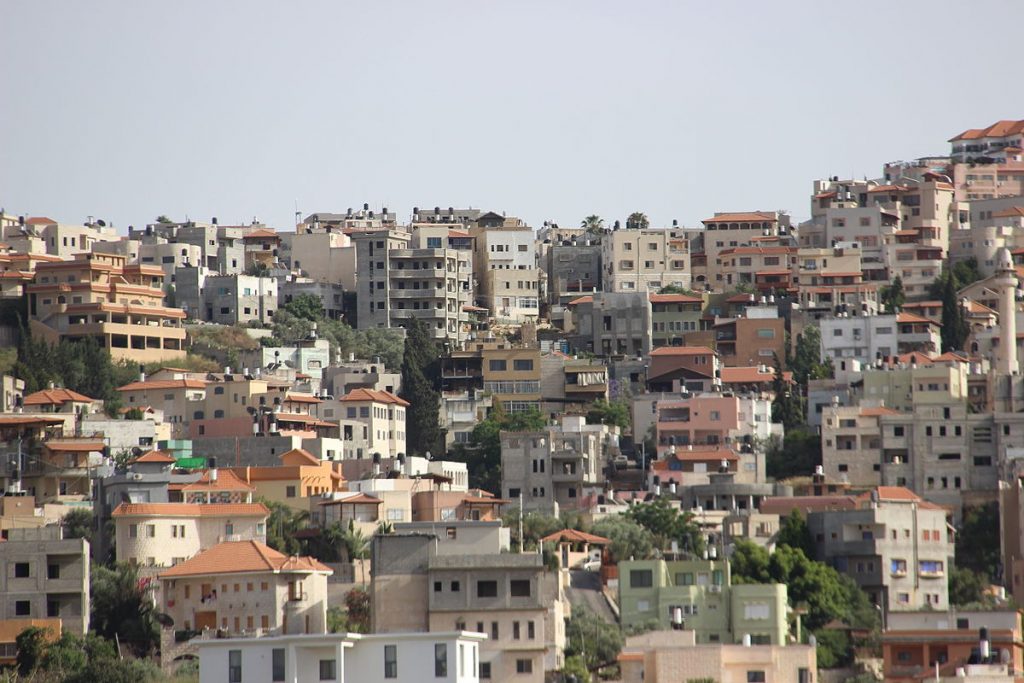 Among the many flaws of Donald Trump’s “deal of the century” – although one which has received little intentional attention – was its seeming proposal that thousands of Arab Israelis should be effectively stripped of their citizenship and transferred to a future Palestinian state.

The US plan proposes that Israeli territorial gains in the West Bank should be partially offset by the Palestinian Authority taking charge of the so-called Triangle. This area, south-east of Haifa, includes 14 towns and cities, such as Umm Al-Fahm (pictured) which are home to close to 300,000 Arab Israelis .

With little elaboration or forewarning – and certainly without discussion with, or the consent of, its residents – the Trump plan says of the Triangle: “These communities, which largely self-identify as Palestinian, were originally designated to fall under Jordanian control during the negotiations of the Armistice Line of 1949, but ultimately were retained by Israel for military reasons that have since been mitigated. The plan contemplates the possibility, subject to agreement of the parties, that the borders of Israel will be redrawn such that the Triangle Communities become part of the State of Palestine.”

In effect, the US proposals would make the area a Palestinian enclave, cut off from the West Bank by the security barrier which was erected in the Second Intifada to stop suicide bombers, who murdered hundreds of Israelis, from entering the Jewish state from the Palestinian territories.

“This clause will be dropped”

The proposal has drawn protests from Arab Israelis and sharp criticism within Israeli more widely. “The communities referred to are home to 280,000 Israelis, the overwhelming majority of whom see themselves as an inseparable part of Israel. They were born, raised and educated in Israel, where most of them want to keep living,” said the left-leaning Haaretz newspaper in an editorial.

From the centre, Ofer Shelach of the opposition Blue and White party bluntly suggested: “This should not be discussed, and when Blue and White comes to power, this clause will be dropped.”

Representatives of the Joint List – the electoral alliance which approximately 80 percent of Arab Israelis vote for – have been similarly forthright in their opposition. “No one will deprive us of citizenship in the homeland where we were born,” Ayman Odeh, its leader, told protesters after the Trump plan was released.

Civic society groups which work to bring Jews and Arab Israelis, who constitute 20 percent of Israeli’s population, together have also reacted to the proposals with anger, describing them as “an affront on the status and rights of the residents of the region”. “The Arab citizens of Israel are not subjects,” wroteAmnon Be’eri Sulitzeanu and Thabet Abu Rass, the co-directors of the Abraham Initiative. “They cannot be passed from hand to hand, and their citizenship is unconditional. We strongly reject the notion of revoking citizenship.”

“The Trump deal is challenging the basic tenets of our democracy and equality,” they continued. “Unfortunately, we now need to re-state the obvious: Arab citizens of Israel, whether living in the Negev, in the Galilee or in the Triangle, are all citizens with equal rights, their citizenship is unconditional and must remain so. Any suggestion of conditional citizenship undermines the very fabric of our society and its democratic values.”

The legal position with regard to the status of Arab Israelis is clear, legal experts have suggested. “Under Israel’s constitution, these people are citizens of the state and they have the duties and the rights not to be forcefully displaced,” argued Hassan Jabareen of Adalah of the Legal Centre for Arab Minority Rights in Israel. “In theory, all Arab citizens of Israel have the same legal rights as any other citizen, though in practice Arab citizens are often discriminated against.”

The American plan is not totally without precedent, with some elements of the Israeli right – including former prime minister Ariel Sharon – offering similar proposals in the past. Most recently, they have been advocated by the right-wing Yisrael Beitenu leader Avigdor Liberman, with the former minister endorsing Trump’s plan.

Israel’s government, however, has said that it does not support what the US has suggested with regard to the The Triangle, although it has also been reported that the idea may initially have been floated to the Americans by Benjamin Netanyahu.

The prime minister’s about-face was, Odeh indicated, motivated by fear as Israeli heads to a general election early next month in which the Joint List is looking to increasing its seats in the Knesset (the alliance – which backed opposition leader Benny Gantz becoming prime minister after September’s elections – currently holds the third highest number of seats in the Israeli parliament). “Netanyahu was worried that the transfer clause will encourage [Arab] voters [to go to the polls] so he gave in,” Odeh tweeted. “He is again proving that nothing scares him more than the Arabs in the voting booth.”

Turnout among Arab Israelis rose sharply at the September general election. This was partly fuelled by allegations that Netanyahu was engaged in a campaign to shore up his support on the hard right by demonising Arab voters. The prime minister’s tactics came on top of tensions caused by the controversial Nation State Law (which defined Israel as the nation state of the Jewish people). The Trump plan, some analysts believe, could drive that turnout higher still.

While enjoying full legal, political and civic rights, the relationship between Israeli Arabs and the state is a complex one, survey evidence suggests.

A poll commissioned last September by Arik Rudnitzky of the Konrad Adenauer Programme for Jewish-Arab Cooperation at Tel Aviv University, found that 71.5 percent of Arab Israelis were satisfied with their life in Israel, 65.2 percent believe they are generally treated equally, and 64.7 percent have an overall positive view of the state.

However, when asked to rate their sense of belonging in the country on a scale of 1 to 10, the average response, was only 4.04.

This complexity was underlined when respondents were asked to define themselves. About half chose an identity comprising both national and civilian components, with 33.5 percent labelling themselves as “Arab Israeli” and 16.3 percent saying they were “Palestinian Israeli”. Among those who opted for a purely national identity, 14.1 percent defined themselves as “Arab”, 17.3 percent opted for “Israeli” and 14.1 percent chose “Palestinian”.

Another survey conducted last autumn by the Guttman Centre for Public Opinion at the Israel Democracy Institute found that 65 percent of Arab Israelis were proud to be Israeli – the highest number since 2003 – and more than three-quarters wanted to see Arab parties joining the country’s government. Nonetheless, it also found that 78 percent of Arab Israelis believe that, over the years, Israeli governments have not treated them equally or fairly and 63 percent believe that Arabs and Jews don’t have equal chances of success in Israel (a belief shared by 57 percent of Jewish Israelis). The survey also found that, with the exception of the Supreme Court,  Arab Israelis have little trust in state institutions.

The different perspectives on citizenship and identity of Israeli Jews and Arabs was also evident in the survey’s finding that, while 59 percent of Jewish Israelis believe that it is impossible for an Arab Israeli who identifies themselves as Palestinian to be loyal to the state of Israel, 70 percent of Arab Israelis disagreed.

As the Israeli historian Alexander Yakobson has argued, “Identity is a complex thing. Fundamentally, the Arab minority in Israel wants what a national minority usually wants: to have it both ways in a positive sense; in this case, to be both Israelis and Palestinian Arabs. It’s obvious that given the national conflict, this is a difficult task.”

But whatever sympathy most Arab Israelis have for the Palestinian cause, many – even those with a complex relationship with the Israeli state – do not relish the prospect of living under the rule of the  Palestinian Authority, which has faced multiple allegations of corruption and authoritarian instincts. As Matzri Matzri, a pensioner living in The Triangle, told the Times of Israel last week: “Life is good for us in Israel. We have democracy, work and a good life.”