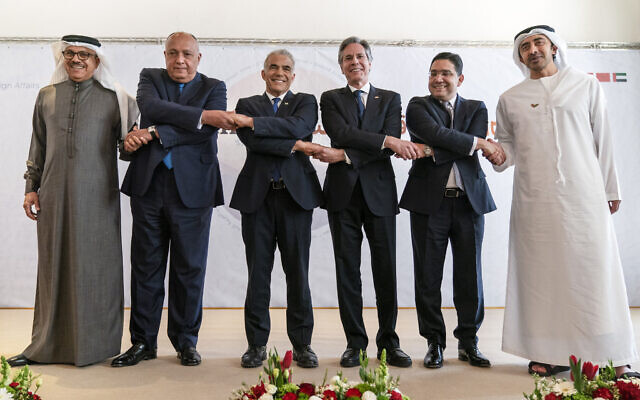 Israel has been rocked by three terrorist attacks in the past week, killing at least eleven people, while it welcomed the foreign ministers of a number of Arab nations for an unprecedented summit over the weekend.

The two-day summit was, however, overshadowed by a series of terror attacks against Israelis in the past week, thought to have killed at least eleven people.

In reaction to the unprecedented displays of cooperation between Israel and its Arab partners, the Negev summit met with familiar criticism from Palestinian Authority president Mahmoud Abbas. In a statement released on the first evening of the summit, the PA foreign ministry accused Israel of “creeping annexation”, despite the fact that the Abraham Accords process – which initiated Israel’s partnerships with most of the Arab countries at the summit – emerged out of the abandonment of proposals to annex part of the West Bank in 2020. Senior Palestinian official Bassam al-Salihi seemingly found no way that such summits would help the Palestinians, stating that, even if Palestinians had been present, “it [would] be on Israel’s terms”. Indeed, on a visit to Jordan on Tuesday, Abbas emphasised his strong ties with the Hashemite kingdom – which had declined to attend the Negev summit – claiming that “our interests, concerns, pain and hope are the same”.

The start of something new

The Negev summit, which brought together Israel with two longstanding partners – the US and Egypt – and three much newer ones – the UAE, Bahrain and Morocco – emerged out of the evolving geopolitical situation in the Middle East.

Despite some cynicism, and overshadowed by terror attacks, the Negev summit did conclude with some significant milestones.

While the Negev summit represented a positive milestone in cooperation between Israel and its moderate Sunni Arab allies, the series of terror attacks against Israelis this week – as well as the continued threats to all Middle Eastern countries posed by an expansionist and potentially nuclear Iran – are a reminder, were one needed, that all is not well in the Middle East.