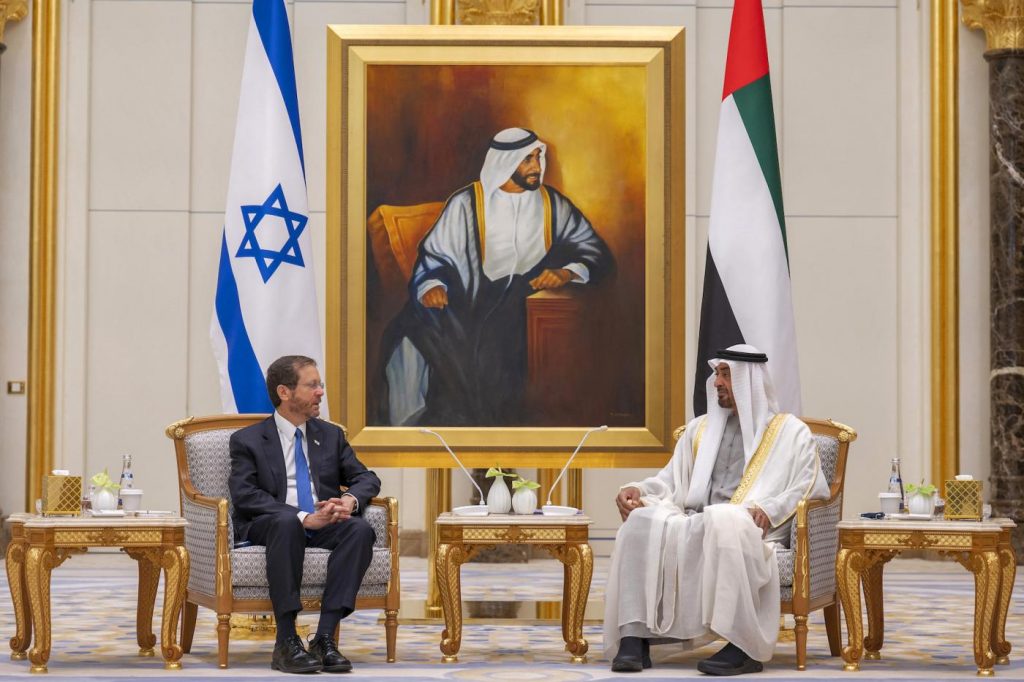 President Isaac Herzog arrived in Abu Dhabi this week, paying the first visit by an Israeli head of state to the United Arab Emirates. Iranian-backed Houthi rebels in Yemen launched a ballistic missile at the Emirates during the visit – the third such attack in recent weeks and a sharp contrast to the warm ties between Israel and the UAE which have developed in the wake of the 2020 Abraham Accords.

“Sons and daughters of Abraham”…

“I am bringing with me a blessing of peace and a message of peace to the entire region, to the peoples of the region,” Herzog said before his meeting with MBZ. “Peace brings with it prosperity, progress, and growth for the benefit of the peoples of the region.” The president invited other nations to join the Abraham Accords, saying his visit “sends a message to the entire region that there is an alternative — of peace and living together — and that the sons and daughters of Abraham can reside and dwell together in peaceful coexistence for the benefit of humanity.” Before inviting Herzog to an unscheduled private meeting at this palace, the crown prince said bilateral relations “are moving full steam ahead, and that there is a common and strong will to strengthen them for the benefit of our countries and peoples.”

… “Israel has much to offer on our global platform”

Joining Herzog at the opening of Israel national day at Expo 2020 Dubai on Monday, Sheikh Nahyan bin Mubarak Al Nahyan, the UAE’s tolerance and coexistence minister and Expo 2020 Dubai commissioner-general, said: “Israel has much to offer on our global platform.” Over 600,000 people have so far visited Israel’s pavilion at the global fair. In his remarks, Herzog praised the UAE’s “combination of an innovative spirit and forward-thinking approach, with deep respect for the glorious Muslim tradition”, saying it and Israel shared a “high regard for religious faith bound with ingenuity”. The president added that Israel’s pavilion “provided a phenomenal taste of what we have to offer — from water tech and sustainable agriculture to public health to smart cities and ground-breaking solutions for a circular economy”. Earlier, Herzog met with leaders of the UAE’s Jewish community. Rabbi Elie Abadie, senior rabbi of the Jewish Council of the Emirates, said “it was emotional to see the president of the State of Israel here in an Arab country for the first time in history.”

Israel’s foreign minister, Yair Lapid, said last month that Israel was looking to “expand the Abraham Accords to additional countries”. He named Indonesia and Saudi Arabia, as well as “smaller countries”, but added that “these things take time”. US secretary of state Anthony Blinked reportedly discussed the possibility of Jakarta normalising its relations with Israel when he visited Indonesia in December. Indonesia, the most populous Muslim-majority country, has no diplomatic ties with Israel, although there have been signs a potential shift may be underway. In January, a delegation of Indonesian officials visited Israel to discuss covid strategies.

The Emirates under attack

The Houthis have launched three attacks against the UAE over the last three weeks. While the two most recent attacks – on 24 January, the UAE said it had shot down two ballistic missiles fired from Yemen – caused no damage or casualties, a drone attack on Abu Dhabi’s airport and an industrial area on 17 January resulted in the death of three workers from India and Pakistan. Moreover, the 24 January attack led to Abu Dhabi’s international airport being disrupted as passenger planes were halted and a “no fly” zone imposed.

Although the Houthi attacks have caused only a small number of casualties so far, the UAE is acutely aware of its vulnerability given its large tourist industry – it attracted 22 million visitors in 2019 – and international trading links. As The Economist suggested this week: “The reputational risk is far greater. The UAE markets itself as an oasis of stability, seemingly immune to the region’s conflicts … Investors view it as a safe place to start a business or buy property.”

The UAE – which was part of the Saudi-led coalition, backed by the US and Britain, which sought to roll back the Houthis’ advances after they took the Yemeni capital in 2014 – has been attempting to disengage from the bloody conflict. Since withdrawing from Yemen in 2019, the UAE has kept only a small counter-terrorism contingent in the strife-torn country. It has also sought to mend fences with Iran: Tahnoun bin Zayed, the national security adviser, visited Tehran in December, while Ebrahim Raisi, Iran’s president, has been invited to visit Abu Dhabi. However, when the Houthis pushed into the energy-rich Shabwa province in the south late last year, the UAE began to increase its air operation in support of Giants Brigades, a militia it had helped to found and fund. The Giants Brigades’ successful resistance to the Houthis in recent weeks has led the rebels to attack the UAE directly in the hope of scaring the Emirates off.

The hand of Tehran?

Honouring his campaign pledges, President Biden has withdrawn US support for Saudi-led offensive operations in Yemen. Shortly after he assumed office, the president also dropped the Trump administration’s policy of designating the Houthis as a terrorist organisation, a step designed to allow much-needed humanitarian assistance to flow into Yemen. However, the Houthis responded by increasing their attacks on Saudi Arabia and targeting the UAE. The Emirates has now asked Washington to redesignate the Houthis.

As Dennis Ross, a former Middle East adviser to the Clinton and Obama administrations, suggested last week, Tehran has outright rejected Biden’s efforts to make the 2015 nuclear both “stronger and longer”, insisting that it won’t negotiate about its missile programme or nefarious activities in the region. “Given the Iranian posture, the Biden administration should make clear that what is fine for you is also fine for us — meaning, if we reach an agreement on the nuclear program in Vienna, that is not going to affect what we do to raise the costs to Iran in the region.”