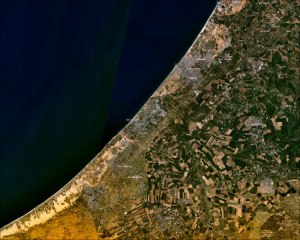 Israel’s foreign minister launched a major new Gaza initiative on Sunday, offering a “new vision” based on “economy for security”. Yair Lapid was speaking on the 16th anniversary of Israel’s withdrawal from the coastal enclave, which has been wracked by war and a humanitarian crisis under the leadership of the Hamas terror group.

False choices and a failed past

Lapid’s speech appeared to acknowledge the failure of Israel’s past efforts to deal with the threat posed by Hamas since it seized power in Gaza in a bloody 2007 coup. “The policy Israel has pursued up until now hasn’t substantially changed the situation,” he suggested. Referring to the tight restrictions on the movement of goods and people in and out of the Strip imposed by Israel and Egypt, Lapid suggested: “The closures haven’t stopped the smuggling and production of weapons. Last night, we once again struck Gaza after yet another rocket was fired, and residents ran to their shelters. We need to change direction.” The foreign minister also rejected the dichotomy that Israel could either reoccupy Gaza or contain the situation by engaging in sporadic bouts of conflict with Hamas and its fellow terror groups. “Those are two bad options,” he said. “That’s not a reality we can accept.”

A warning to Hamas…

Lapid also made clear that Israel was not softening its stance towards Hamas. “The international community and the people of Gaza need to know that Hamas terrorism is what’s standing between them and a normal life,” the foreign minister suggested. “We need to tell Gazans at every opportunity – Hamas is leading you to ruin. No-one will come and invest real money, and no-one will try to build an economy in a place from which Hamas fires and which Israel strikes on a regular basis.” If Hamas continued to attack Israel thus halting the plan, Lapid warned, “we will know and the international community will know, and mostly the people of Gaza will know, that Hamas refuses to improve life in Gaza because the only thing they care about is killing Jews”.

Lapid also continued recent efforts by the Israeli government to bolster the PA. “The representative body of the Palestinians isn’t Hamas, but the Palestinian Authority,” he argued. “Israel won’t hand out prizes to radical terror organisations and weaken the authority that works opposite us in an organised manner.” Lapid’s remarks came two weeks after defence minister Benny Gantz met with Palestinian president Mahmoud Abbas in the highest-level meeting between Israel and the PA in over a decade. Under Lapid’s plan, the PA would reassume responsibility for border crossings between Israel and the Strip during the first stage of the initiative and would take over civil and economic affairs in Gaza in the second phase. Speaking at the conference, Gantz also sought to shore-up the PA. “We have a political dispute with the leaders of the Palestinian Authority, which must be resolved, but we share a common desire for peace and security for all those who live between the sea and Jordan. It is for this reason, that I decided to meet with Palestinian Authority Chairman Mahmoud Abbas, who has been working against terrorism over the years, in the interests of his people and his national vision. In these challenging times, coordination with the Palestinian Authority and strengthening the Palestinian economy is dozens of times better than strengthening Iranian proxies on our borders.”

While the unity government – a coalition of parties stretching from the left to hard right of the Israeli spectrum – is ideologically split on the Israeli-Palestinian conflict, Lapid reiterated his long-standing support for a two-state solution and suggested his Gaza plan would assist its prospects.

After Lapid’s speech terrorists fired rockets from Gaza towards Israel on Sunday evening for the third consecutive night.

A group of US Democratic party senators who visited Israel and the West Bank last week on a delegation praised the new Israeli government. “They’ve made significant, promising steps in the last few months, whether opening up a high-level dialogue with the Palestinian Authority or beginning to open up pathways for humanitarian relief into Gaza,” Senator Chris Murphy suggested. “We pressed them to do more, but we’ve met with Israeli leadership that seems very pragmatic and very willing to try to work with both parties in Congress to address a pathway toward, at the very least, a meaningful dialogue with the Palestinians,” Murphy added after meetings with Bennett and Lapid.

Observers fear that the ceasefire between Israel and Hamas is under heavy strain and that a new round of fighting could be imminent. Hamas has previously unleashed rocket attacks and violence as a means to force Israel to allow cash payments from Qatar to enter Gaza to pay its members.