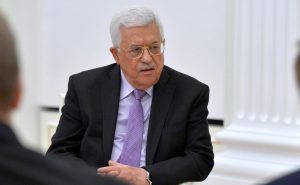 The highest-level meeting between Israel and the Palestinian Authority in over a decade took place last week, and was followed by the announcement of a series of confidence-building measures.

The last high-level meeting between Abbas and Israeli ministers took place in 2010 when the president met with former prime minister Benjamin Netanyahu. Strained relations between Israel and the PA under Netanyahu were evident in the fact that the two men last communicated by phone in 2017. In mid-July, Gantz, who heads the centrist Blue and White party, and Abbas held a phone call. Public security minister Omar Barlev, a Labor member of the government, has subsequently met with Abbas. Other Israeli ministers and their PA counterparts have also held meetings over the summer. In July, Abbas called Israel’s new president, former Labor leader Isaac Herzog, to congratulate him on his election.

The meeting marks a potentially important step in the new Israeli government’s apparent efforts to “shrink the conflict” by strengthening the PA and improving the lives of ordinary Palestinians.

An unrepentant Gantz brushed off attacks from Israeli right-wingers for meeting with Abbas. “Neither we nor the Palestinians are going anywhere tomorrow morning,” he told reporters at a briefing. Later, Gantz attacked his critics on Israeli television, suggesting: “The public needs to understand that we are operating in a complicated reality. We have good relations with the Palestinian Authority and there are problems of terrorism in the West Bank and Gaza. We want to work forcefully against extremists and strengthen as much as possible the moderates. Whoever thinks that this is a simple formula to manage is mistaken,” Gantz added. “It is not simple. It is complicated.” “The strategic relations and security ties of the State of Israel should be looked at from a higher vantage point than some headline on Twitter or report from someone from somewhere,” the defence minister argued.

Following Gantz’s meeting with Abbas, Israel offered a number of practical measures designed to bolster the PA and improve everyday life for Palestinians.

Israel last week also announced a number of measures designed to ease conditions in Gaza. Despite continuing rioting along the border, the coastal enclave’s fishing zone was expanded to 15 nautical miles – the furthest distance Israel has permitted since Hamas seized control in a bloody 2007 coup. More goods and construction materials will be able to enter Gaza through the Kerem Shalom Crossing, and an additional 5m cubic meters of water will be allowed into the Strip. In addition to the 2,000 Gazans already permitted to enter Israel, 5,000 more workers will also be allowed in.

Terror groups Hamas and Islamic Jihad panned Abbas for meeting with Gantz. “President Mahmoud Abbas’s meeting with Israeli defence minister Benny Gantz is a stab in the back of the Palestinian people and what they have sacrificed. It is a betrayal of the blood of the martyrs,” said Hamas spokesperson Abd al-Latif al-Qanou in a statement. A second Hamas spokesperson, Hazim Qasim, attacked Abbas for “encouraging Arab countries to normalise [relations] with Israel” by meeting the senior Israeli official. “This weakens the Palestinian stance that rejects normalisation,” Qasim said.

Reaching out to Jordan and Egypt

Since Yair Lapid took the helm of the Ministry of Foreign Affairs in June, Israel has sought to repair relations with Jordan and Egypt which the Netanyahu government had left in a weakened state.

Despite the ideological tensions within the Israeli government, better relations with the PA may be on the cards.

“Bennett’s talk of shrinking the conflict and Gantz’s explicit statement following the meeting that the PA must be strengthened and that doing so is the only way to weaken Hamas, we see a genuine transition away from Netanyahu’s approach,” wrote Michael Koplow, policy director of the Israel Policy Forum last week. “Taking steps to strengthen the PA and publicly acknowledge its importance to Israel, and even treating it more like a partner than a pariah, is the opposite tack than the one taken by Netanyahu, and it hopefully signals the possibility of progress building upon progress.”