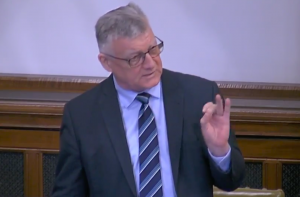 In the first week back after the conference recess, parliamentarians debated Iran’s compliance with the JCPOA nuclear deal in a Westminster Hall Debate organised by Stephen Crabb.

Reflecting longstanding Republican criticism of the deal signed under president Obama, the Trump administration withdrew the United States from the JCPOA in 2018, and reimposed all sanctions as part of its failed ‘maximum pressure’ campaign. Having already allegedly failed to comply with certain requirements under the deal, the Iranian regime effectively withdrew from the JCPOA too in 2018.

Following his campaign pledge to re-enter the agreement, talks have been ongoing in Vienna between representatives of the Biden administration and Iran. Despite early optimism, the coming to power of hardliner Ebrahim Raisi as president of Iran – known to have been involved in the mass killing of Iranian dissidents in the 1980s – has significantly damped the prospects for a speedy return to the deal.

Since the American withdrawal, Tehran has taken a number of steps to almost entirely violate the agreement’s terms.

Many of the JCPOA’s critics, including a number of Arab states and Israel, have warned since 2015 of the original deal’s shortcomings. A number of issues remain unresolved and are seen as opportunities for Iran to continue its malign activities even when in compliance with the deal.

President Biden has repeatedly stated that he wants to fix these loopholes through a “stronger and longer” deal that would “strengthen and extend the nuclear deal’s provision, while also addressing other issues of concern”. This would form part of a “renewed international consensus around America’s Iran policy – and a redoubled commitment to diplomacy – to more effectively push back against Tehran’s other malign behaviour in the region”.

Outstanding problems with the JCPOA include:

The Westminster Hall Debate, which took place on Tuesday afternoon, was well attended by parliamentarians from a number of parties, including Labour MPs.

All of Iran’s actions in the last few months would indicate a new Government that is attempting to gain leverage in any future negotiations. However, as has been noted many times, American patience for talks to resume is not limitless, and the advances in nuclear knowledge that Iran is acquiring while talks are stalled will at some point render the benefits of returning to the JCPOA meaningless.

If the deal is to survive then compromise will be required. If diplomacy fails, however, the return of international sanctions, a rapid expansion of Iranian nuclear activity and a heightened risk of military tension in the region are considered likely outcomes.