Step Twenty Four: Support the reunification of the West Bank and Gaza under PA authority 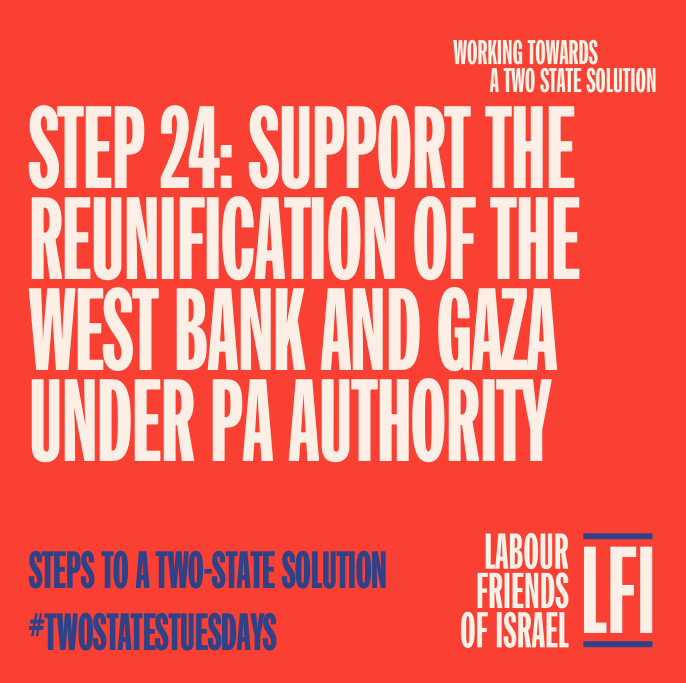 The reunification of the West Bank and Gaza is a crucial step in the establishment of a viable Palestinian state. It is also a key demand of the Palestinian people and intimately connected to the holding of legislative and presidential elections in the Palestinian territories, which have been repeatedly delayed and postponed.

Gaza – from which Israel unilaterally withdrew its forces, and uprooted settlers, in 2005 – was under the control of the Palestinian Authority from the time of the authority’s establishment after the 1993 Oslo Accords until terror group Hamas seized power in a bloody coup in 2007. Since that date, the Palestinian territories have effectively been separated with Hamas imposing strict Islamist authoritarian rule in Gaza, while the PA governs the West Bank.

Over the past 15 years, there have been repeated efforts – often supported by regional and international actors – to encourage the process of reunification. Notably, in June 2014, a unity government was established following an agreement between Fatah and Hamas. However, the government, led by prime minister Rami Hamdallah, resigned a year later due to its inability to operate effectively in Gaza. Subsequent efforts to promote reunification – including agreements between Hamas and Fatah in 2017 and 2020 – have ultimately proven unsuccessful. So, too, have efforts by Abbas to exert economic pressure on Hamas – such as cutting the salaries of Gaza-based civil servants and stopping payments to Israeli utility companies which supply water and electricity to the Strip – to come to an agreement.

Key disagreements between the two sides hinge around Abbas’ legitimate and oft-repeated demand that – across the Palestinians – “there must be one authority, one law and one gun – like every other country in the world.” But Hamas, which will not recognise the State of Israel and promotes violence and terrorism, has refused to cede security control of Gaza to the PA. The PA, meanwhile, continues to implement Oslo-era security cooperation agreements with Israel.

Reunification thus rests on an interlinked, multi-step approach involving an end to terrorism and the disarmament of Hamas; the reconstruction and economic regeneration of Gaza; and the holding of free and fair elections in both Gaza and the West Bank.

10 years after Gaza takeover, Hamas under pressure to surrender power

The long road towards Palestinian reunification