Step Three: Demand an end to the Palestinian Authority’s payment of salaries to convicted terrorists and the payment of rewards to the families of “martyrs” 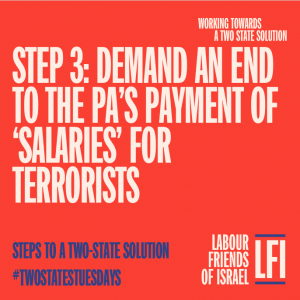 The Palestinian Authority’s policy of paying “salaries” to those convicted of terrorist offences and to the families of deceased terrorists (so-called “martyrs”) incentives terror, breaches the terms of the Oslo Accords and sows distrust, violence and fear which weakens support in Israel for a two-state solution. The policy also deprives desperately stretched Palestinian public services of vital investment, and compromises international donors who, while not directly funding the payments, effectively subsidise them by freeing up cash for the PA to spend on them.

The amounts of money involved are significant: in 2017, it was revealed that the bill for payments to Palestinian prisoners had exceeded $1bn over the previous four years. At over $300m annually, the payments are estimated to take up roughly seven eight percent of the PA’s budget. Moreover, the policy is also clearly intended to encourage the worst acts of violence by making greater payments for longer sentences. The allowances range from $432 a month for a term of up to three years in prison to $3,707 for a term in excess of 30 years. Terrorists from Jerusalem receive a monthly $93 supplement, while Arab-Israeli terrorists receive a $154 supplement.  One-time grants – again linked to time served – are also paid to prisoners on their release. Depending on the length of their sentence, former prisoners are also entitled to a range of benefits, including guaranteed civil service employment (with a salary paid even if a position is not available) and assistance with health insurance payments and university tuition fees.

The PA’s policy is unpopular with the Palestinian public – a 2020 poll showed more than two-thirds of West Bank residents agree the authority should “stop paying extra bonuses and benefits to prisoners or ‘martyrs’ families”. The PA has also faced measures designed to curtail the payments introduced by the US, Israel, Australia and some European countries, such as the Netherlands. Nonetheless, the Palestinian president, Mahmoud Abbas, has resolutely defended the policy – arguing in 2018 “even if we have only a penny left, we will give it to the martyrs, the prisoners and their families” – and prioritised the payments, even as the salaries of public service workers were slashed last yearin 2019 and the Palestinian economy was hit by the impact of the pandemic in 2020-1 Indeed, despite pressure from the Biden administration to end the payments, the Palestinian prime minister, Muhammad Shtayyeh, repeated Abbas’ words – which are themselves regularly broadcast on official PA media – as recently as September. Coordinated international action to demand the payments are replaced by a needs-based welfare system is thus essential.

PA pays 42000 to family of terrorist who murdered 2 Israelis: https://www.timesofisrael.com/pa-pays-42000-to-family-of-terrorist-who-murdered-2-israelis/