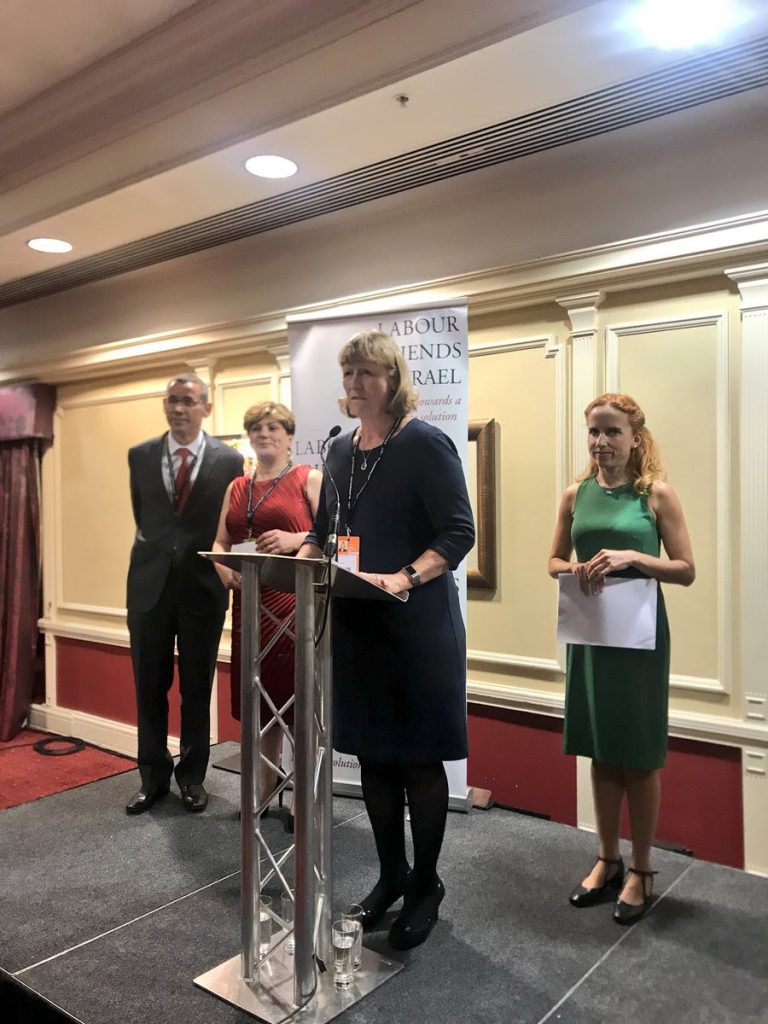 Labour should stand by its friends on the Israeli left, Labor MK Stav Shaffir told a packed LFI reception on Tuesday night.

Ms Shaffir, a rising star in the Israeli Labor party, was in Brighton for the Labour party’s annual conference. “When sister-parties turn their backs at the progressive camp, they don’t help Israel, they don’t help the Palestinians, and they don’t help peace – they only delay its arrival,” she told over 500 people at the LFI reception.

“There is, however, a different way: cooperating, learning from each other, supporting each other, strengthening the progressive camp globally.” Only the Israeli Labour party, Ms Shaffir argued, was “willing to take the courageous steps needed to end the conflict, and bring hope to millions of people”.

In a direct appeal to Labour members, she suggested: “We need you with us, to rebuild our camp, to get those who disagree with us to sit and talk, to strengthen the alternative we’re building in Israel.”

Ms Shaffir also launched a strong attack on the BDS movement, saying it “serves as a political tool for our opponents to show the Israeli public that the world is against the very existence of our country, and doesn’t understand our security needs and fears. It pushes the public further to the right, making them think we should trust no one but ourselves”. BDS, she continued, also “isolates those who are fighting for a better Israel, our progressive camp, and strengthens the Israeli right and their politics of fear”. She condemned “those who say they’re in favor of a two-state solution but cannot condemn Hezbollah and Hamas soundly; those who cannot unequivocally accept Israel’s right to exist. They all do nothing to advance peace”.

Ending the conflict with the Palestinians, Ms Shaffir declared, is “not only possible, it’s a necessity”. “It’s in our national and security interest to keep Israel Jewish and democratic, equal to all of our citizens, a home where everyone gets a fair chance. A land of achievement, of big ideas, of hope.” Noting that 60 per cent of Israelis support a negotiated agreement with the Palestinians that includes land swaps, Ms Shaffir argued that “our current government doesn’t reflect the broad support we have on these issues”.

The reception also heard from the shadow foreign secretary, Emily Thornberry, who reaffirmed Labour’s support for “a two state solution and a peaceful future for Israelis and Palestinians”.

Noting Britain’s role in the Balfour Declaration, she argued that British foreign policy was being “held in abeyance”. “We are just holding our breath waiting for Donald Trump to tell us what British foreign policy will be, and I think it’s disgraceful.” “We have a role to play in the Middle East,” she argued, “and we should be a little less arrogant but a bit more proud. We have a role to facilitate talks.”

Ms Thornberry also sent condolences on behalf of the Labour party to the families of the Israelis killed in a terror attack near Jerusalem yesterday.

Mark Regev, Israel’s ambassador to Britain, congratulated LFI on its 60th anniversary this year, praised Labour’s role in the Balfour Declaration, and said the party had a “proud history of supporting Zionism”. He also condemned the rise of anti-semitism in the Labour party over the past two years. Referring to one prominent activist suspended after suggesting that Jews had financed the slave trade, he said: “We all know that this is not criticism of the Israeli government, this is not even about Palestinians, this is clearly just an anti-Jewish bigotry,” he said.

“All of us here know that this bigotry is something that is fundamentally contrary to the values the Labour movement has espoused for decades.”

LFI’s chair, Joan Ryan, urged progressives to retain their sense optimism quoting the words of the former Israeli president, Shimon Peres: “There are no hopeless situations. Only hopeless people.”

Calling for more support for Israelis and Palestinians engaged in peacebuilding efforts, she praised the efforts of all “those working at a grassroots level, in Israel and Palestine, to foster new ties and a new understanding between the two peoples”.

“Supporting people-to-people work is not a fluffy afterthought or a distraction from high-level negotiations,” she argued.

“Investing in peacebuilding is about very practical politics. It’s about how to garner the necessary public support for any future agreement and how to ensure that that agreement can weather the many challenges it will inevitably face.”

Ms Ryan noted that LFI’s campaign in support of an International Fund for Israeli-Palestinian Peace had already led the UK government to commit £3m over the next three years to boost coexistence spending. This was, she said, money that, “from the opposition benches, Labour MPs fought for and won” which “will provide practical support to grassroots peacemakers”.

During her visit, Ms Shaffir held a series of meetings with senior Labour figures, including shadow international trade secretary Barry Gardiner; shadow defence secretary Nia Griffith; and shadow Foreign Office minister Fabian Hamilton. She also met with a number of Labour MPs, including Wes Streeting, Luciana Berger and Jess Phillips. Our busy stand in the conference centre attracted scores of delegates, many of them wishing to show their support for LFI.

A series of attacks on Israel and Jews launched from the floor of the Labour party conference and at fringe meetings was condemned at LFI’s reception.

Referring to calls for the Jewish Labour Movement and LFI to be expelled from the Labour party, Emily Thornberry said it was “completely inappropriate for those on the fringes to stifle debate”, while Mark Regev asked: “Those who would expel Zionists, would they expel some of Labour’s greatest luminaries – Harold Wilson, Manny Shinwell and Michael Foot?”

“The truth is Labour has historically stood in solidarity with the Jewish people in our struggle for national freedom and security.

“Just as Labour has historically stood in solidarity with the Jewish people in fighting anti-semitism.”

Speaking earlier, LFI director Jennifer Gerber, said: “It’s beyond disgraceful that there have been calls to expel Labour Friends of Israel and the Jewish Labour Movement from the party. Supporting the world’s only Jewish state is a mainstream and long-standing Labour position. We hope the Labour party leadership acts swiftly to condemn those who seek to bully pro-Israel and Jewish members out of the party.”