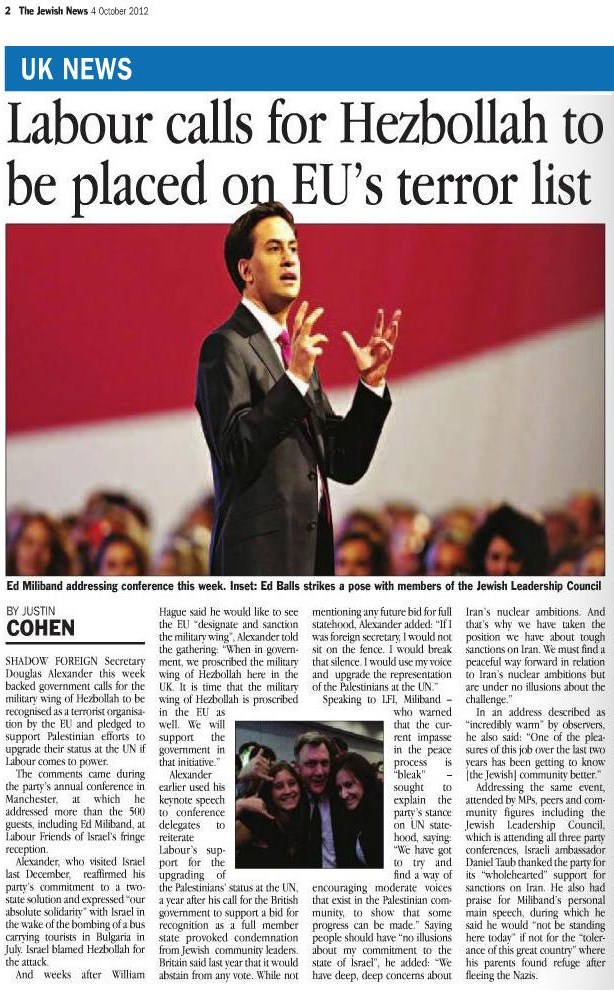 Addressing a packed room of over 500 guests at the LFI Annual Reception on 2 October, Labour Party Leader Ed Miliband told the Labour Party Conference of his admiration for Israel and Britain’s Jewish community. Continuing his theme from his keynote conference speech, he spoke about his faith, of wanting to make a positive difference and, in turn, his support for the charitable work of Britain’s Jewish community. Speaking of his support for Israel, Ed Miliband said: “I want to put on record that we must have zero tolerance for those people who question the right of Israel to exist.” He added: “I utterly condemn the rocket attacks from Gaza on citizens of Israel,” and asserted that: “We have deep, deep concerns about Iran’s nuclear ambitions. And that’s why we have taken the position we have about tough sanctions on Iran.”

Also speaking at the reception, Shadow Foreign Secretary Douglas Alexander reaffirmed that the party “remains committed to a negotiated solution to the challenge in the Middle East.” The shadow foreign secretary also called for the EU to proscribe Hezbollah’s military wing, stating: “In government we proscribed the military wing of Hezbollah here in the UK. It is time that the military wing of Hezbollah is proscribed in the European Union as well. We will support the government in that initiative.” LFI were delighted to be joined in Manchester by Israeli Ambassador to the UK, His Excellency Daniel Taub, who expressed his sincere gratitude for the Labour Party’s support for Israel. Guests and speakers were welcomed to the reception by LFI Vice Chair Rachel Reeves MP, Shadow Chief Secretary to the Treasury. Rachel visited the region with LFI last year, and in 2009.

Speaking after the reception, Ben Garratt, LFI Deputy Director said: “We were delighted to have the opportunity to welcome Ed Milband to this year’s LFI Annual Reception, and to hear him talk so proudly about the party’s support for Israel, so firmly about the threat posed to Israel and beyond by a nuclear armed Iran, and so passionately about the need for a negotiated two state solution.”