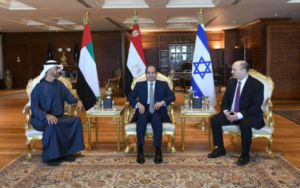 Summit in Egypt > Spokesman of the Egyptian Presidency

Naftali Bennett met Egyptian President Abdel-Fattah al-Sissi and Abu Dhabi Crown Prince Mohammed bin Zayed Al Nahyan in Sharm el-Sheikh on Tuesday for a summit focused on the Iran deal and the fallout from the Russian invasion of Ukraine.

Israel’s emerging alliance with moderate Arab states such as the UAE and Egypt has strengthened as negotiations on a renewed Iran nuclear deal reach their final strait in Vienna. All three countries are concerned that providing Tehran with sanctions relief while its ballistic missile programme and regional meddling go unaddressed will simply reward Iran’s bad behaviour.

The Sharm el-Sheikh summit – the first joint meeting between an Israeli prime minister and the leaders of Egypt and the UAE – also discussed energy market stability and food security in the light of the war in Ukraine.

As the summit commenced, US State Department spokesman Ned Price said that, despite “significant progress”, a new nuclear deal is “neither imminent nor is it certain”. He added that Washington was “preparing equally for scenarios with and without a mutual return to full implementation” of the 2015 Joint Comprehensive Plan of Action. Price refused to comment on reports that the US is prepared to delist Iran’s Islamic Revolutionary Guard Corps as a terror group. (Such a step would still leave the IRGC facing other economic sanctions).

Bennett has avoided getting into a highly public row with the US over the Iran deal. In an apparent swipe at his predecessor, he said on Monday: “In 2015, the pre-signing rhetoric was at its peak, and it failed. The deal was signed. Not only was it signed, but after that, ears in Washington were closed on all other matters.”
Read full story