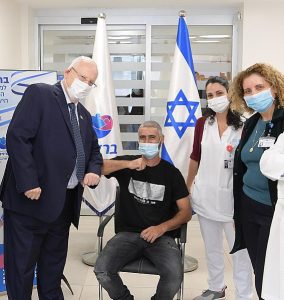 The Palestinian Authority announced its intention to cancel a coronavirus vaccine exchange deal with Israel on Friday, just days after an agreement was reached.

It is thought that the PA cancelled the deal in part to counter the increasing popularity of the hardline Hamas terrorist group. The announcement focused on the expiration date of a small proportion of the doses.

The deal, announced last week, would have seen some 1 million doses of the Pfizer vaccine given by Israel to the Palestinian Authority to help its floundering vaccination campaign.

In reference to the first 100,000 doses delivered, PA health minster Mai al-Kaila said “the professional teams in the ministry found that the vaccines we received yesterday from Israel did not meet the specifications, so the government decided to return them”.

Israeli officials have insisted that the vaccine doses were fine and should not be wasted. Ynet news reported that Israel sent doses due to expire in late June and early July so as not to waste them. Israelis are currently receiving doses with a similar expiration date.

The rest of the vaccines set for delivery to the PA, some 90% of the total, had a later expiration date and were suitable for several months.

The deal was initially reached to exchange between 1 and 1.4 million doses with the Palestinians now, in return for the same number of doses in the early autumn.

While Israel’s vaccination campaign led the world, the Palestinian Authority has struggled to vaccinate its population. Some 437,000 Palestinians have received at least one dose thus far.