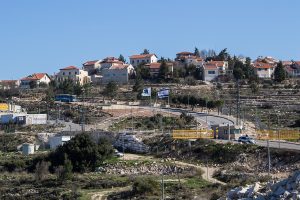 The approval of some 3,000 housing units for Israeli settlers in the West Bank has drawn criticism from left-wing voices in the Israeli government, as well as the Biden administration.

The Israeli Labor party criticised “those who make policy declarations with international implications irresponsibly, without coordination and without preparation”, adding that their more centrist coalition partners were “no Rabin”.

This is a reference to Yitzhak Rabin, the Labor prime minister who negotiated and signed the Oslo Accords with the Palestinians.

The comment was interpreted as a criticism of defence minister Benny Gantz, who reportedly wishes to be “the new Rabin”.

The approval marks the first time that housing units have been approved under the Biden administration.

The US state department made clear that it “strongly opposes the expansion of settlements” which “damage the prospects for a two-state solution”.

The units were approved for construction in West Bank Area C, which remains under Israeli civil and security administration.

The PA has civil and joint security authority in Areas A and B, comprising roughly 40 percent of the territory and home to around 85 percent of its population.