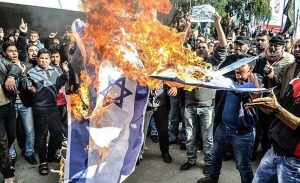 Israeli flags being burnt in Gaza > Tasnim News, CC BY 4.0, via Wikimedia Commons

Hamas, Palestinian Islamic Jihad (PIJ) and other Gaza-based groups have all called for a stepping up of “resistance” against Israel by Palestinians in the past month.

Indeed, Hamas and PIJ have explicitly stated their intention to ignite a new “intifada”, or uprising, against Israel in Jerusalem and the West Bank, while maintaining relative calm in the Gaza Strip itself.

This is thought to be because of a belief that terror attacks in Jerusalem and the West Bank gain more media attention than military confrontations in Gaza.

Conducting attacks in Jerusalem and the West Bank also allows Hamas to demonstrate its reach beyond the Gaza Strip and into the West Bank.

Hamas’s factional rivalry with Fatah, the party of Palestinian Authority president Mahmoud Abbas, is thought to be another motivator, as Hamas seeks to present itself as the true “defender” of the Palestinian people.

Both Hamas and PIJ have repeatedly urged Palestinians to launch “all forms of resistance” against Israel, including “armed struggle”.