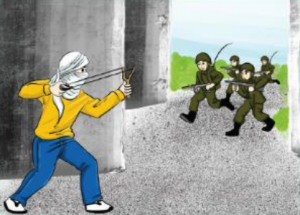 The EU funds the salaries of the Palestinian Authority-employed civil servants who write and produce the textbooks.

The motion effectively freezes EU funding to the PA while deliberations continue and the committee examines the possibility of adding conditions to the funding.

The motion demands that the PA be “closely scrutinised” and that improvements to eliminate hateful content should be made “expeditiously”.

The motion made clear that the EU “deplores that problematic and hateful material in Palestinian school textbooks has still not been removed” and expresses “concern about the continued failure to act effectively against hate speech and violence in school textbooks”.

The motion stemmed from a January 2022 report by IMPACT-se, which found that new teaching materials produced by the PA were worse than current and previous textbooks, which incite and glorify violence against Jews and Israel, as well as promoting antisemitic tropes.