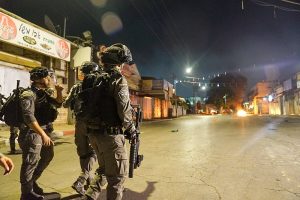 After eleven days of fighting, an Egyptian-brokered ceasefire between Israel and the Hamas terror group was announced on Thursday night, and has since held.

The announcement of a ceasefire on Thursday followed days of speculation, in which rumours abounded and Hamas figures predicted one in the coming days. Israel’s security cabinet voted unanimously to approve the Egyptian initiative to stop the fighting, in the midst of international pressure including from US president Biden. Fireworks were set off in celebration in Gaza, East Jerusalem and the West Bank as the ceasefire commenced at 2am on Friday morning. Terrorist rockets continued and Israeli strikes on terrorist targets both ended about 10 minutes before the deadline. Although Hamas figures claimed to have extracted concessions from Israel, the Israeli government denied this and characterised the deal as a “mutual and unconditional ceasefire”.

The ceasefire was largely brokered behind the scenes by Egyptian and UN mediators, with input also from the U.S.

The conflict and resulting ceasefire have had political implications in Israel itself, where coalition negotiations are ongoing following the fourth election in two years. Head of the opposition Yair Lapid, a leader of the anti-Netanyahu camp, has held the mandate to form a government since 5 May. During the conflict itself, the Islamist Ra’am party announced that it would suspend talks with the anti-Netanyahu “change bloc” in response to the outbreak of conflict. Further movement came when Naftali Bennett, leader of the right-wing Yamina party, similarly ended talks with the change bloc and indicated his willingness to support Netanyahu during the conflict.

With eight days left until his mandate expires, however, Lapid this week announced his first coalition agreement. In a joint statement, Lapid and Avigdor Liberman, leader of right-wing, fiercely secular Yisrael Beytenu, announced that Liberman would become finance minister should Lapid successfully form a government. Yisrael Beytenu MKs would similarly receive three other cabinet posts, as well as the powerful chairmanship of the Knesset Finance Committee. Lapid also signed a coalition deal with the centre-left Meretz party, with an increase to the health budget and climate change legislation. Further agreements are thought to be coming with Merav Michaeli’s centre-left Labor party, while Lapid is also in talks with the centrist Blue and White. However, in order to form a majority coalition, Lapid must also gain the support of either the right-wing Yamina and New Hope parties, or the Arab-majority Ra’am and Joint List. Acknowledging that this would be a challenge, Lapid has vowed to “turn over every rock in order to form a government”.

Despite small-scale clashes between Palestinian protestors and Israeli police in Jerusalem, the ceasefire between Israel and Hamas appears to be holding.

News of the ceasefire was welcomed around the world. The UN secretary general, Antonio Guterres, urged Israel and Hamas to observe the ceasefire and called on global leaders to develop a reconstruction package to “support the Palestinian people and strengthen their institutions”. US president Biden commended Israel for engaging with the ceasefire process, and gave his “full support to replenish Israel’s Iron Dome system to ensure its defences and security in the future”.
What next?

Should the ceasefire continue to hold, it will be an endorsement of Biden’s behind-the-scenes diplomatic efforts and evidence against the ‘megaphone diplomacy’ pushed by some of his critics. Whether the rebuilding and reconciliation processes will succeed in avoiding future conflict remains to be seen.