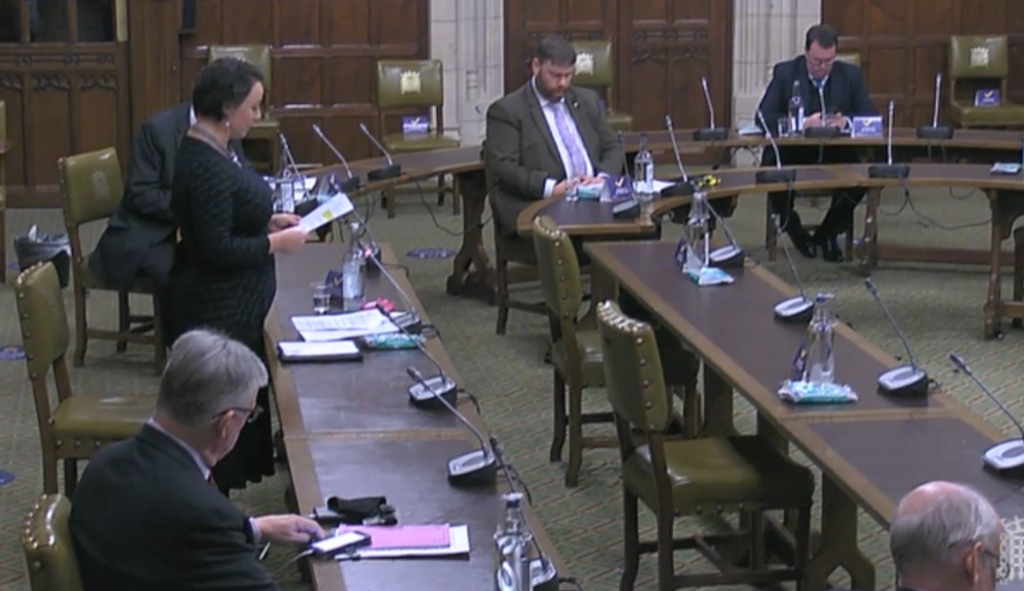 LFI vice-chair Catherine McKinnell led a debate in parliament today calling for the British government to support the establishment of an international fund for Israeli-Palestinian peace.

The debate is part of a long-running campaign by LFI – ‘For Israel, For Palestine, For Peace’ – to back the fund, which would invest in peacebuilding projects that bring Israelis and Palestinians together.

Ms McKinnell and other LFI parliamentary supporters also used the debate to call for the government to reverse its decision to axe funding for coexistence work and highlighted positive developments in the United States where Congress looks set to pass legislation to deliver unprecedented funding for Israeli-Palestinian peacebuilding and Palestinian economic development.

In her speech, Ms McKinnell argued that the current hiatus in the peace process and the obstacles which exist to a two-state solution should not become “a cause for inaction and passivity”. Instead, she argued, the international community should think “creatively and boldly about how we can best foster an environment in which peace negotiations and a two-state solution might resume and succeed” and how any future agreement might best be sustained.

The example of Ireland

Ms McKinnell suggested that, while the conflicts were very different, the International Fund for Ireland – which over the past 30 years has invested over £700m in peace-building work, bringing together nationalist and Unionist communities in more than 5,800 coexistence projects – could serve as a model in Israel-Palestine.

The International Fund for Ireland provided the vital civic society foundations which underpinned the drive towards peace in the 1990s, nurtured the widespread popular support for the Good Friday Agreement, and then helped to sustain it through the many challenges it has faced in subsequent years.

Speaking of the IFI, LFI vice-chair Conor McGinn suggested in the debate: “People on all sides trust it. It has no political agenda. Its only agenda is peace and reconciliation.” He added: “The lessons to be learned for any Israel Palestine fund are almost all good. The even-handedness dimension is the most important of it and in this spirit the International Fund for Ireland has for some years now made itself available to share experience and knowledge with organisations promoting reconciliation in other locations including Israel and Palestine.”

“Northern Ireland’s example teaches us that it is never too early to begin investing in and building constituencies for peace,” Ms McKinnell argued. “In short, peacebuilding is the vital prerequisite of peacemaking.”

This week marks the 35th anniversary of the signing of the Anglo-Irish Agreement, which led to the establishment of the International Fund for Ireland in 1986.

Since the advent of the 1993 Oslo Accords, a plethora of grassroots groups which bring Israelis and Palestinians together have sprung up in a wide variety of fields, including sports clubs for children and young people, as well as cultural, interfaith, tech and environmental projects.

There is now a strong evidence base – both from academic research and government evaluations – to suggest that such projects work.

Last year, an academic study carried out for USAID, the US government’s international development agency, evaluated four programmes in which the US had invested. The study found that three to five years after their involvement in the projects, participants: continued to hold positive feelings about those from the “other” side of the divide; had an increased belief that peace is possible;
and reported that their perceptions had been altered by the programme.

“Undoubtedly, these activities contributed to decreasing tension between the two sides,” the study argued. “These activities promote better understanding of one another and, in turn, foster improved relationships that can decrease the likelihood of violence. Narratives are a powerful tool to improve participants’ attitudes, empathy and trust, which will ultimately change stereotypes and willingness to engage with one another. Upon listening to the narratives, the participants granted legitimacy to the narratives of the other.”

The USAID studies are supported by the findings of a 2017 report by Ned Lazarus, a professor at George Washington University whose work drew on 20 years of evaluation data and extensive field work. It found that peacebuilding projects create peacebuilders and constituencies for peace; change attitudes; and create empathy and trust between the two peoples. For example:

But, as Ms McKinnell argued, “despite the widespread – and correct – recognition of the importance of laying the economic foundations for peace, such civic society work has too often gone unacknowledged by the international community and has consequently suffered huge underinvestment” .

She added: “Indeed, thanks in part to cuts by the Trump administration, international investment in people-to-people work has actually fallen since 2017 from an already pitiful £37m per year to around £26m now.”

The contrast between this expenditure and that undertaken in Ireland is stark. The international community currently spends less than $4 per person per year on peacebuilding in Israel-Palestine. By comparison, the international community spent over a billion dollars over two decades in Ireland. This averaged spending of $33 per person, per year starting twelve years before a peace deal was reached. Spending in Israel-Palestine is thus almost ten times less than the amount invested in similar efforts in Ireland.

“Without funding from governments and private philanthropy, coexistence projects can only have a limited impact,” Steve McCabe, chair of LFI, said in the debate. “But operating at scale and properly funded they can build powerful constituencies for peace, forcing politicians to return to meaningful negotiations.”

An international fund for Israeli-Palestinian peace

In his report, Lazarus supported the establishment of an international fund for Israeli-Palestinian Peace following the successful precedent of the International Fund for Ireland. This new fund, he argued, would “provide a consistent, sustainable and transparent funding source equipped to bring to scale successful models and best practices, and achieve broader impact and influence in Israeli and Palestinian societies”. It would also “improve conditions for peacebuilding over the medium and long-term through economic development, societal capacity-building and civil society peacebuilding”.

As envisaged by the Alliance for Middle East Peace – a coalition of more than 90 Israeli and Palestinian grassroots organisations – an international fund for Israeli-Palestinian peace would seek to leverage and increase public and private contributions, funding joint economic development and civic society projects that promote peace, coexistence and reconciliation between the two peoples.

The fund would be an independent organisation, supported by public and private donors, and it explicitly would not seek to replace any support that would otherwise be provided directly to either the Palestinian Authority or Israel.

Its goal would be to raise levels of investment nearly tenfold to $200m per year. Those contributions would come from the US, Europe, the rest of the international community – including the Arab world; and the private sector.

As Ms McKinnell noted, the UK government’s record on support for people-to-people work is, at best, patchy.

In a major victory for LFI’s campaigning, in 2017, the Department for International Development announced the establishment of a new programme, People for Peaceful change, which would invest $3m in coexistence projects over the next three years.

However, the programme came to an end this year and the government has refused to commit to renewing it, or any other form of financial backing for coexistence work. “Consistent investment to enable programmes to achieve long-term results is vital to the success of co-existence work,” Mr McGinn suggested in the debate. “It can’t be a tap that is turned off – it must be sustainable.”

Moreover, despite becoming the first government to back the concept of an international fund in 2018, ministers have since then “failed to follow up their warm words,” Mr McCabe told the debate.

The absence of UK involvement comes despite positive developments in the United States.

The US Congress is expected to pass the Middle East Partnership for Peace Act by the end of the year.

This legislation – which passed the House of Representatives in July and is now progressing through the Senate – has strong bipartisan support and will establish a People-to-People Partnership for Peace Fund. The fund will provide $110m over the next five years to peacebuilding projects. It also establishes a new Joint Investment for Peace Initiative providing $140m in support to Palestinian-owned SMEs.

Speaking in the debate, Mr McCabe praised ALLMEP for its role in helping to craft and push the legislation. “ALLMEP should be congratulated in their success in building an almost unprecedented coalition of support making this fund one of the only bipartisan Israel-Palestine priorities in Congress,” he suggested.

The legislation also leaves open the door to other international actors both donating to it and participating in its governance.

These provisions, together with the arrival of the Biden administration in January could allow the fund to evolve into a new, truly multilateral institution.

The shadow Middle East minister, Wayne David, endorsed the fund and urged the government to participate in it.

“This fund must not be for the United States alone,” he told the debate. “What we require is multilateral international support for this. I would hope very much so that the British government is unambiguous and absolutely emphatic in supporting this fund as quickly as it’s able to do so.”

As LFI vice-chair Diana Johnson wrote in an article on Labour List this morning to accompany the debate: “There is a huge opportunity for the UK to get behind a multilateral initiative to provide tangible support to Israeli-Palestinian peacebuilding, and demonstrate to the incoming Biden-Harris administration that the UK is serious about international cooperation.”