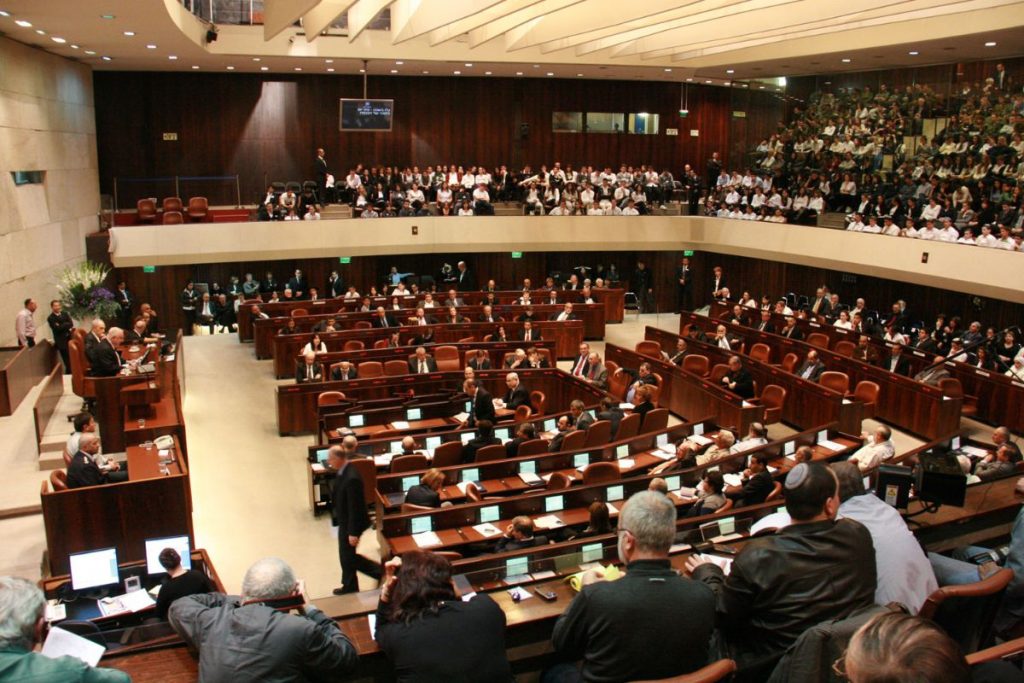 The painstaking process of assembling a new Israeli government is due to culminate in its swearing-in tomorrow.

Israel has had a caretaker government since late 2018 when the first of three closely fought, inconclusive elections was triggered.

The third of those elections in early March eventually led to a “unity government” coalition deal between Benjamin Netanyahu and the leader of the centrist Blue and White alliance, Benny Gantz. That agreement triggered fury and the splintering of Blue and White, although Gantz will be joined in the new government by the Israeli Labor party, which has secured two key portfolios: the economy and social welfare ministries.

The coalition agreement will see the premiership rotate between Netanyahu and Gantz, with the prime minister remaining in office until next autumn when he will hand the reins to the former IDF chief. Netanyahu will, however, go on trial later this month on multiple corruption charges, having abandoned his previous attempts to pass legislation which would have granted him immunity from prosecution. Gantz had previously insisted he would not serve in government alongside an indicted Netanyahu, however after March’s deadlocked election he softened his stance and demanded only that the prime minister not attempt again to stop the trial going ahead.

The new agreement will, however, allow Netanyahu to bring a vote to the cabinet and Knesset any time after 1 July to begin the process of annexing parts of the West Bank assigned to Israel by Donald Trump’s “peace plan”. It is not yet clear, though, whether the US will demand that the annexation of settlements and the Jordan Valley – which will total roughly 30 percent of the West Bank – be accompanied, as the plan requires, by Israeli agreement to begin negotiating an independent Palestinian state on the remaining territory.

Some commentators have suggested that, despite his seeming enthusiasm for annexation, Netanyahu primarily sees the issue in terms of shoring up his right-wing voter base and won’t have the time or inclination to pursue it. Polls show that fewer than half of Israelis support annexation and less than one-third believe it will go ahead in the next year.

Breaking on the right

The new Israeli government is likely to be less right wing than that Netanyahu has led over the past five years. The pro-settler Yamina alliance – which includes the Jewish Home party which has anchored the right-wing of Netanyahu’s previous governments – now looks set to move to the opposition benches. Fearing being outflanked on the right, Netanyahu had been keen to keep the party – which is led by defence minister Naftali Bennett – in the government.

However, Yamina rejected his offer of the education and Jerusalem ministries, provoking a public spat between it and Likud. “Yamina decided to resign from the right-wing bloc,” Likud said in a statement on Tuesday which accused the alliance of demanding cabinet posts “which have no connection to his party’s electoral size, or to the priorities of religious Zionism”.

Yamina, in turn, has launched a broadside against Netanyahu which prefigures what is likely to be constant right-wing sniping from the opposition. “Due to the make-up of the government and its likely policy as a left-wing government headed by Netanyahu, and in light of the prime minister’s outright disdain towards Yamina and its voters, [we] have decided to serve the public from the opposition,” the alliance said. Yamina had provided a number of highly controversial ministers in Netanyahu’s previous government, including education minister Rafi Peretz and transport minister Bezalel Smotrich. Smotrich assailed Netanyahu on Monday evening as showing a “patronising, condescending and disrespectful” attitude toward the religious right. Highlighting Yamina’s future likely lines of attack, he called Likud’s right-wing policies “mediocre,” its diplomacy “acquiescent,” its attitude toward the justice system “weak and submissive,” and its positions on issues of Jewish identity “dithering”.

Divvying up the jobs

In the run-up to the swearing-in of the government, the parties entering the new administration have been divvying up posts and ministries. The task is particularly complex for Netanyahu: Likud had 15 ministers in the outgoing government but will have only 10 in the new one. Moreover, despite its greater strength in the Knesset, the government’s right-wing parties – Likud and his ultra-Orthodox allies – will have equal representation with its centrist and left-wing members. Thus, in line with the coalition agreement, half the cabinet will come from the 53-seat right-wing bloc. The remaining 50 percent of posts, however, will be shared between parties with 19 seats; 16 Blue and White MKs, two from Derech Eretz – a break-away from Blue and White – and two from Labor. This has made Gantz’s task considerably easier. The former opposition leader will become defence minister and deputy prime minister and his close ally Gabi Ashkenazi will become foreign minister. Gantz has also secured the key “democracy” ministries – justice, communications and culture – which many on the Israeli left believe Likud and its right-wing allies had sought to manipulate for their own ends.

On Netanyahu’s side, Likud will receive the finance ministry (which will be taken by outgoing foreign minister Yirsael Katz), transportation, energy and environmental affairs. This gives the prime minister control over the energy and infrastructure sectors. Crucially, this allows Likud to hold sway over ministries that affect business and the unions. But the transportation and energy ministries are also responsible for a relatively large number of state-owned companies, providing ample opportunity for political patronage. As Haaretz noted, transport and energy also offer the chance for Netanyahu to associate himself with politically popular new infrastructure projects such as the Tel Aviv Light Rail and the Jerusalem railroad electrification. Likud also has strong links to workers at Israel’s ports, airports and railways – as well as taxi drivers – and the prime minister will be keen to ensure that their voices are heard in the new government.

As he seeks to keep Likud’s big beasts in order and reduce his party’s share of top government ministries, Netanyahu is also looking overseas. On Monday, he announced that public security minister Gilad Erdan would be appointed Israel’s new ambassador to the US and the United Nations. It is the first time since Abba Eban’s tenure in the 1970s that Israel has rolled the two high-profile postings together. Netanyahu will also get to appoint ambassadors to the UK, France and Australia for the duration of the government’s time in office, raising speculation that he will seek to move former Likud ministers into Israel’s most prestigious embassies abroad. Gantz will, however, appoint his own ambassador to the US once he becomes prime minister.

Netanyahu’s position will be strengthened by the news that Likud MK and former tourist minister Yariv Levin will become speaker of the Knesset. The post was held on an interim basis by Gantz as a means to exercise leverage over Netanyahu. As speaker, Gantz had the power to allow legislation to proceed which would have effectively barred Netanyahu from the premiership by preventing an indicted individual from forming a government. Former speaker Yuli Edelstein, who was engaged in a fierce constitutional clash with Israel’s Supreme Court in late March, will become health minister. Despite pressure from Likud, Gantz vetoed Edelstein’s return to the post of speaker.

Netanyahu and Gantz cleared the last remaining major hurdle to the formation of the government last week when Israel’s Supreme Court rejected a series of petitions designed to frustrate it. After two days of hearings, the court ruled that Netanyahu’s indictment did not disqualify him from forming a government (all other government ministers in Israel have to stand down if they are indicted). The court’s verdict effectively said it was not for the judiciary to step in and override the will of the Knesset and, through it, the voters. “An indictment pending against an MK does not preclude assigning him the task of forming a government and, deriving from that, his appointment as the prime minister,” the court ruled. “The decision to ask the president to assign the task of forming the government on a member of Knesset is a decision that involves the use of broad political judgment. It is designed to translate the voters’ wishes into support for one of the members of Knesset to serve as prime minister. That is at the heart of the democratic process. External intervention in that process constitutes a substantive blow to the principle of majority rule, which is at the foundation of our system of government.”

The court also unanimously ruled that while, in the words of chief justice Esther Hayut, the coalition agreement was “highly unusual” and some of its elements “raise serious difficulties,” there currently were no grounds to justify the court’s intervention in any of its provisions. That decision followed partial revisions to the agreement, and the clarifications that were provided by the Blue and White and the Likud, after the two-day hearing. Principal among the changes was extending the term of the next government from three to four years (the normal term of an Israeli government). This will mean that Netanyahu and Gantz will serve for another six months each after their original 18 months rotation.

This, of course, assumes the government lasts four years. But with many Israelis convinced that Netanyahu will attempt to wriggle out of handing over the premiership to Gantz next autumn, that itself remains highly doubtful.