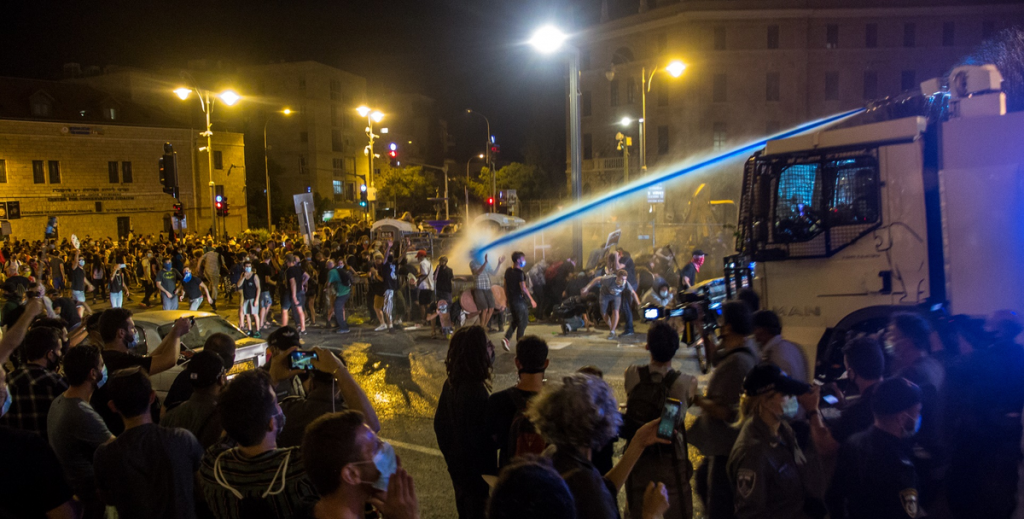 An estimated 10,000 people rallied outside the prime minister’s official residence in Jerusalem – the largest gathering yet since the wave of protests started six weeks ago.

There were also demonstrations in Tel Aviv and Haifa, outside Netanyahu’s villa in Caesarea, and in the southern cities of Ashkelon and Sderot. Thousands of protesters also gathered on 260 of the country’s largest bridges and junctions.

The Jerusalem demonstration was largely peaceful, with only 12 protesters arrested. A further five people were taken into custody for allegedly attacking the demonstrators.

There were reports at the weekend of sporadic attacks on protesters. Although apparently uncoordinated, Netanyahu’s critics have accused him of deploying inflammatory language. “This government-endorsed incitement terrifies me as someone who grew up here and knows exactly what it could lead to. It is our responsibility to stop a leadership that defends violence on the streets,” said Dana Miles, an activist for the left-wing Peace Now pressure group, in a veiled allusion to the 1995 assassination of Yitzhak Rabin. As opposition leader in the mid-1990s, Netanyahu has been accused of adopting rhetoric which added to the toxic atmosphere which led to the prime minister’s murder.

“Black Flag” anti-corruption protesters calling for Netanyahu’s resignation have been joined by demonstrators angry at the government’s bungled handling of the coronavirus pandemic and its economic and social impact.

The protests are the largest Israel has seen since the 2009 social justice movement.

They take place against a backdrop of continuing tensions between Netanyahu and his centrist Blue and White coalition partners. On Sunday, one of the prime minister’s closest allies, Miki Zohar, likened the “unity government” formed in May to a failing marriage which was heading for divorce.

Netanyahu and Gantz publicly clashed at Sunday’s cabinet meeting as the prime minister ramped up his attacks on the demonstrators and the Blue and White leader strenuously defended the right to protest.

“I see an attempt to trample on democracy. There is a distortion of all the rules. Nobody restricts the demonstrations. On the contrary — they are accommodating toward them,” he said. He went on to label the protests “a coronavirus incubator”, complaining that “there are rules that are not enforced, no one restricts it and no one has even tried to restrict it”.

The prime minister also accused the media – a frequent target of his ire – of stoking the demonstrations. “I condemn the one-sidedness of most media outlets. They do not report the demonstrations — they participate in them,” he suggested. “These demonstrations are fuelled by a media mobilisation, the likes of which I don’t remember before,” Netanyahu added. “They are encouraged, allowed to paralyze neighbourhoods and block roads, in stark contrast to everything that was accepted in the past.”

But Gantz took a different tack, telling the cabinet that the right to demonstrate was the “lifeblood of democracy”. “As a government, we have a responsibility to allow the demonstrations to take place and to protect the demonstrators,” the deputy prime minister and defence minister suggested. In an apparent reference to accusations of heavy-handedness, Gantz also said the police should “act with the minimum force necessary to maintain the law.” Under their April coalition deal, Gantz is due to replace Netanyahu next autumn.

The Likud party later accused the Channel 12 and Channel 13 TV networks of “delivering propaganda for the anarchist left-wing demonstrators”.

Some observers believe that Netanyahu – traditionally a canny reader of public opinion – is unfazed by the protests. “Hebrew language media outlets reported possibly 10,000 people protesting in Jerusalem on Saturday night. But Netanyahu, the country’s longest-serving leader, knows there are around 9 million more people in Israel. It is them he thinks about,” argued the Guardian’s Jerusalem correspondent, Oliver Holmes.

Indeed, some commentators have suggested that the prime minister is attempting to exploit the protests for his own political ends. “Netanyahu, as we know, must have an available enemy, whom he can attack and portray as demonic and inhuman,” wrote Haaretz’s Yossi Verter of Haaretz. “On the eve of a possible election campaign into which he is dragging a country which has become his hostage, he is beginning to design the target for the campaign: the media and the demonstrations.”

Netanyahu is said to be angling to dissolve the recently formed “unity government” and plunge Israel into new elections – the fourth in just under 18 months. The prime minister and Gantz are locked in an increasingly acrimonious dispute over the budget which some speculate Netanyahu is using as a cover to pull the plug on an administration which has been in office for less than three months.

If a new state budget is not passed by 25 August, the government will be automatically dissolved. The coalition agreement between Gantz and Netanyahu stipulates that the government should pass a two-year budget, but the prime minister now says he only wants to pass a measure covering 2020.

The Haaretz newspaper reported last month that Netanyahu had decided to seek new elections following the decision of the Jerusalem District Court to begin hearing testimony from witnesses in his corruption case on three days each week from January. The prime minister will be required to be in court and fears that the Supreme Court will back petitions which require him to stand down while he’s on trial. Netanyahu, who dismissed the report as “absurd”, is also said to be keen to regain control of the Justice Ministry, which is now led by one of Gantz’s Blue and White allies.

But Gantz is reportedly considering backing a bill which would prevent Netanyahu running for office due to his trial if the prime minister’s budget manoeuvering leads to new elections. A report on Channel 13 TV said Gantz would aim to push legislation aimed at Netanyahu before the Knesset was dissolved.

Netanyahu is also coming under pressure from his traditional allies in the ultra-Orthodox parties who are dead-set against new elections. They are said to be warning that if the prime minister refuses to compromise and the government falls, they may break their informal political alliance with Netanyahu and may opt not to recommend him as prime minister after polling day.

Even if elections are prevented this year by the passage of a one-year stop-gap, Netanyahu would have the option – by engineering a dispute over the 2021 budget – of forcing new elections without having to first hand the premiership to Gantz.

A further row is also brewing over a controversial bill pushed by the right-wing Yamina party which would allow the Knesset to overrule the Supreme Court. Yamina, a partner in Netanyahu’s previous coalition, went into opposition when the prime minister signed his deal with Blue and White. Zohar said at the weekend that he will ask the prime minister to back the Yamina bill, despite Gantz’s party making clear it is opposed to it. “We will not allow anti-democratic legislation. That’s what we promised the public and that’s what we will do in order to preserve the State of Israel,” Blue and White said of the proposed legislation. Party sources indicated that Gantz would be prepared to bring down the government over the bill. Those threats appear to have forced Likud into a rethink and its MKs are expected to skip today’s vote on the bill.

Meanwhile, the protests – seemingly without much by way of organisation or leadership – show no signs of abating. Despite a range of grievances and causes, they are united by one common cause: the desire to see the back of Netanyahu. As Roi Neumann, a spokesperson for the Black Flag movement told Haaretz this week: “Everyone has an agenda on some issue, but everyone comes together over the fact that as long as Bibi is in power, nothing can be resolved.”