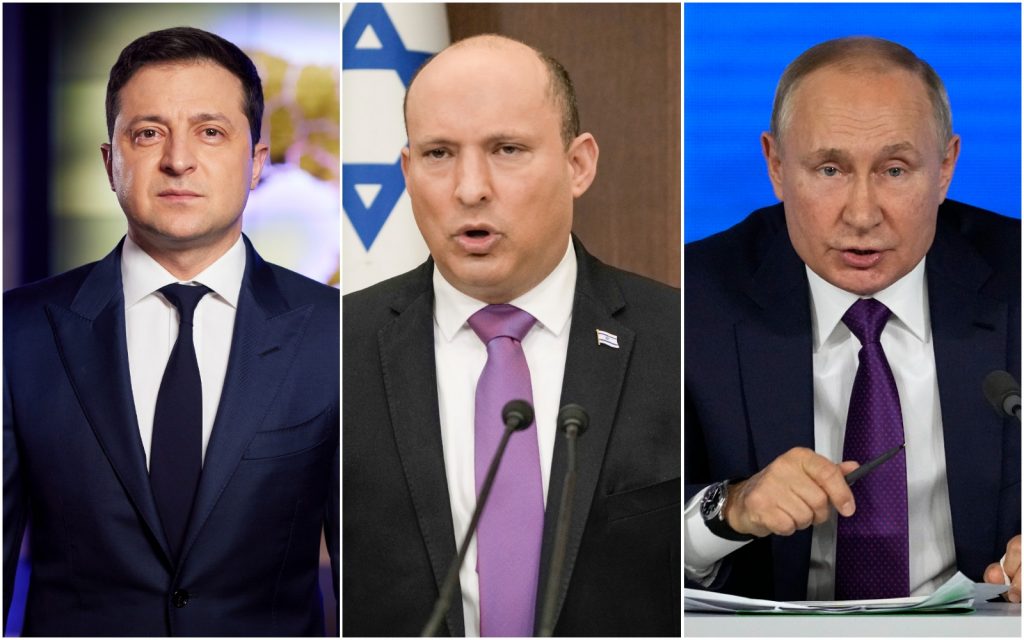 Naftali Bennett made a dramatic trip to Moscow last weekend to meet with Vladimir Putin as Israel found itself attempting to help mediate an international crisis for the first time. The prime minister’s trip on the Sabbath came as Israel increases its humanitarian aid to Ukraine and began to receive the first of what is expected to be several thousand refugees.

Bennett was joined by housing minister Ze’ev Elkin. Ukrainian-born, Elkin had previously accompanied former prime minister Benjamin Netanyahu during several meetings with Putin. “Elkin is much more than a mere interpreter,” one analyst suggested. “If there’s anyone who can compose the political-psychological profile of Vladimir Putin for western intelligence agencies, it’s Elkin. Few understand Putin better than he does. He has spent dozens of hours and heard him speak in his own language, without any need for a translator. He has heard the nuances, has observed his body language and has clocked his behaviour patterns, his reactions, his crisis management, his strengths and his weaknesses.” Elkin, who quit Likud to join the opposition prior to last year’s elections, has family in the heavily attacked Ukrainian city of Kharkiv. He is reported to have met with both the Russian and Ukrainian ambassadors to Israel last week. Elkin is also believed to have been offered a cabinet post by Zelensky after his election in 2019.

Ukraine and the US both thanked Israel for its efforts.

The Palestinian Authority and Hamas have avoided condemning the Russian invasion. The Palestinian prime minister, Mohammad Shtayyeh, told his cabinet on Monday that Israel’s attempt to mediate between Russia and Ukraine was “a mockery of international politics”. He continued: “We hope that the war will come to end in a way that ensures international security and safety, and protects civilians, who are the victims of wars.” While many Palestinians sympathise with Ukraine, a small pro-Putin rally in Bethlehem on Sunday attracted social media attention and underlined the historic ties between the Palestinian cause and the former Soviet Union.

Back in New York

Russia’s embassy in Tel Aviv this week rebuked Israel for its UN General Assembly vote condemning the invasion of Ukraine. A letter delivered to the Foreign Ministry said Russia was “very disappointed” by Israel’s position. Israel co-sponsored a resolution which was overwhelmingly passed with only Russia, Syria, North Korea and Eritrea voting against. Iran and Iraq were among the 35 abstentions. Moderate Arab states, including Saudi Arabia, the UAE, Egypt and Jordan, all voted to condemn Russia. In its statement, Iran said that “the current complexities in the fragile region of Eastern Europe have been exacerbated by the provocative actions and decisions of the US and NATO. The security concerns of Russia must be respected”.

The reverberations from Russia’s attack on Ukraine have been felt in Vienna where the Iran nuclear talks are believed to be close to a conclusion. On Saturday, the Russian foreign minister, Sergei Lavrov, demanded “guarantees at least at the level of the secretary of state” that the US sanctions would not affect Moscow’s relationship with Tehran. Blinken dismissed Lavrov’s demand as “irrelevant”. But while Russia has thrown an apparent wrench in the talks, Iran is believed to be uninterested in Moscow’s concerns and is keen to conclude an agreement as soon as possible. With sanctions on Russia, it spies an opportunity to earn much-needed foreign currency by selling its reserve of 80 million barrels of oil (a move which could help lower consumer energy prices within weeks) and attract investment from international companies which are abandoning Russia. “The confluence of interests between Iran and the United States is looking stronger than the one between Iran and Russia,” observed Haaretz columnist Zvi Bare’el.

Israel announced an increase in humanitarian aid to Ukraine over the weekend. An Israeli-staffed field hospital will begin operating this week, while generators that can continue to function without a power supply are also being transferred to the country. In the first week of the war, Israel flew 100 tons of aid to Ukraine, including medical supplies, winter clothing and water purification systems. As of Monday, over 2,000 Ukrainian refugees had arrived in Israel. “Israel is the western country without a land border with Ukraine that has absorbed the most Ukrainians per capita since the outbreak of fighting,” interior minister Ayelet Shaked said. Her ministry believes 15,000 Ukrainians may arrive in Israel by the end of the month.

On Saturday, demonstrators took to the streets of Tel Aviv, chanting slogans including “Putin is a fascist” and “Stop the war in Ukraine”. Last weekend, thousands marched to the Russian embassy in the city.

Israel is currently uniquely placed to keep open a line of communication between the Kremlin and Zelensky. However, its likely this window of opportunity will close if the Russian offensive further intensifies. Russia’s evident irritation at Israel’s vote at the UN indicates it may soon no longer regard the Jewish state as in any way neutral in its bloody war of aggression.