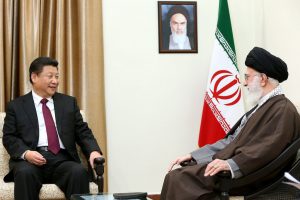 China may be about to throw the beleaguered Iranian regime a crucial economic lifeline with the two countries close to signing a 25-year “strategic accord” that would see the Islamic republic receive a $400bn boost.

Details of the accord were leaked earlier this month to the New York Times. It published excerpts from the 18-page document, which was marked “final version” and dated June 2020.

Under the agreement, China would receive heavily discounted Iranian oil for the next 25 years. In return, China would boost its economic investment in the Islamic republic, including in banking, infrastructure, telecommunications and transport.

The deal – which mirrors in some respects an agreement reached between Russia and China in 2013 – would also encompass deeper military cooperation between China and Iran, including joint training and exercises, research and weapons development, and intelligence sharing. This, it states, would fight “the lopsided battle with terrorism, drug and human trafficking and cross-border crimes”. Since 2014, Iran and China have undertaken joint military exercises on three occasions, most recently last December, when they joined with the Russia navy in the Gulf of Oman.

In an indication of the burgeoning relationship between Tehran and Beijing, the document opens with the words: “Two ancient Asian cultures, two partners in the sectors of trade, economy, politics, culture and security with a similar outlook and many mutual bilateral and multilateral interests will consider one another strategic partners.”

The Iranian foreign minister, Mohammad Javad Zarif, said earlier this month that President Hassan Rouhani’s cabinet had approved the agreement in June. It has not yet been submitted to the Iranian parliament – or publicly released – but Rouhani’s chief of staff, Mahmoud Vaezi,  suggested after the New York Times published its story that the deal could be signed by next March. Iran’s supreme leader, Ayatollah Ali Khamenei, has publicly backed a strategic partnership agreement between his country and China.

Iran has been subject to crushing US sanctions – which have stoked unemployment, inflation and popular unrest, while driving down foreign trade, investment and, critically, oil exports – since President Trump unilaterally withdrew from the 2015 nuclear agreement two years ago. The Times says that the China-Iran deal could represent a “major blow” to the Trump administration’s “maximum pressure” campaign on Tehran.

China has not revealed details of the agreement nor commented on whether it has been approved by President Xi Jinping. The Chinese president first proposed the partnership during a visit to Tehran in 2016 (pictured), although Beijing’s Foreign Ministry flatly denied the existence of an agreement when it was first publicly floated last September. China is Iran’s top trading partner.

In response to the Times story, the US State Department indicated the Trump administration would continue to target Chinese companies which breach American sanctions on Iran: “The United States will continue to impose costs on Chinese companies that aid Iran, the world’s largest state sponsor of terrorism. By allowing or encouraging Chinese companies to conduct sanctionable activities with the Iranian regime, the Chinese government is undermining its own stated goal of promoting stability and peace.”

“Iran and China both view this deal as a strategic partnership in not just expanding their own interests but confronting the U.S.,” Ali Gholizadeh, an Iranian energy researcher at the University of Science and Technology of China in Hefei, told the Times. “It is the first of its kind for Iran keen on having a world power as an ally.”

The agreement could complicate Israel’s avowed aim of preventing Iran becoming a nuclear power. “Having China clearly at its side would ease the economic pressure on Iran,” suggested Haaretz’s Amos Harel. “In more extreme circumstances, the Chinese-Iranian alliance could serve as a counterweight to American-Israeli friction with the Iranian regime over its nuclear programme. In a theoretical scenario in which the recent moves continue to escalate, Beijing’s potential response would have to be taken into account to a greater extent.” Israel is widely believed to have been responsible for an explosion earlier this month which badly damaged a building producing centrifuges at Iran’s secret Natanz nuclear site. The attack is thought to have set back Iran’s nuclear programme by over a year.

Given its heavy investment in Israel’s extensive hi-tech sector, Dov Zakheim, a former US under-secretary of defence, argued that an agreement could make China the key arbiter in the Middle East. “Despite America’s major military presence in the region, in practice it will be China that will mediate between Tehran and Jerusalem in order to ensure that its sources of oil, gas and technology remain stable and secure,” he wrote this week.

Commentators believe that China, one of the signatories to the nuclear agreement alongside the US, Russia, the EU, Britain, France and Germany, has become increasingly supportive of Iran at the International Atomic Energy Agency and last month pushed back against a European-backed resolution critical of the Islamic republic’s multiple breaches.

Under Xi’s “Belt and Road Initiative”, China has vastly expanded its aid and economic investment programme, and the proposed agreement is ambitious in scope with nearly 100 potential projects outlined. These include new airports, high-speed railways and subways, and free-trade zones. It would also see China build the infrastructure for Iran’s 5G network, while seeing the two authoritarian states cooperate in curtailing free speech on social media.

The relationship between Iran and China has been described by Ellie Geranmayeh of the European Council on Foreign Relations as “pragmatic, business-oriented, and non-ideological”. She has cautioned against reading too much at this stage into the military cooperation between the two countries. “Any Chinese-Iranian military and security collaboration – while viewed as a provocative move by the West – is likely to be a slow-burner. When Iran, China, and Russia took the unprecedented step in 2019 of conducting joint naval drills, one Chinese security expert outlined in discussions with the European Council on Foreign Relations that this was much more about signalling to the United States rather than Beijing’s appetite to engage heavily in security operations with Iran.”

Geranmayeh notes too that, after Xi’s 2016 visit, talks between China and Iran were slow to begin. “It now seems that, in the past year, Iran and China – both of which have been left in a precarious position by the Trump administration – have accelerated their talks.”

Nonetheless, there are signs of some disquiet in Iran about a potential agreement with China. Last month, the hardline former president, Mahmoud Ahmadinejad, attacked the negotiations. “The Iranian nation will not recognise a new secret 25-year agreement between Iran and China,” he stated in a sign of the nationalist backlash against a deal.  Voices have also been raised against an agreement within the Iranian parliament, which is dominated by ultra-conservatives since rigged elections earlier this year.

“The news about a long-term pact came to the surface last month leading to negative reactions among many Iranians who saw a strategic deal with China as a ‘sell-out’ of Iran’s resources by the clergy-dominated regime in Tehran,” reported Radio Farda. “Many social media opinion leaders charged that such a move is an attempt by the regime to save itself amid serious economic crisis and isolation.”

As with so much else in Iran, however, it is Khamenei’s approval that Rouhani and his government will need if the agreement is to come to fruition.