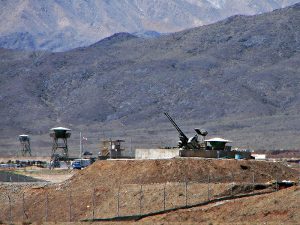 Iran has blamed Israel for an explosion last week which badly damaged a building producing centrifuges at the secret Natanz nuclear site.

The blast may have delayed Iranian efforts to produce enough highly enriched uranium for a nuclear weapon by months or even years, analysts suggest.

On Sunday, the New York Times quoted a Middle Eastern intelligence official as saying Israel was responsible for the attack last Thursday. (Former defence minister Avigdor Liberman hinted that the Times’ source was Mossad head Yossi Cohen). The paper also says a member of the Islamic Revolutionary Guard Corps told it that an explosive was used – probably a bomb carried into the building.

Israeli ministers did little to quell the speculation, pointedly not denying the country’s involvement. “Everyone can suspect us in everything and all the time, but I don’t think that’s correct. Not every event that happens in Iran is necessarily related to us,” defence minister Benny Gantz said in a radio interview.

The Iranian government has repeatedly threatened to destroy Israel.

“This method Israel is using is dangerous, and it could spread to anywhere in the world,” the Iranian government spokesman, Ali Rabiei, said during a press conference on Tuesday. “The international community must respond and set limits to these dangerous actions by the Zionist regime.”

After initially attempting to play down the incident, Iran admitted on Sunday that the explosion at Natanz caused “significant damage”. Satellite pictures appeared to show widespread devastation at the sensitive facility which is buried under a concrete and enmeshed steel roof which can only be penetrated by American bunker-buster bombs.

The Islamic republic’s atomic agency spokesman, Behrouz Kamalvandi, also admitted that the building targeted at the site was a centrifuge assembly centre and was being prepared to build more advanced centrifuges to enrich uranium more quickly. Highly enriched uranium can be fuel for an atomic bomb.

“It’s possible that this incident will slow down the development and expansion of advanced centrifuges,” Kamalvandi said. “There were advanced equipment and precision measurement devices at this site that were either destroyed or damaged.” “More advanced centrifuge machines were intended to be built there,” he suggested.

The building at Natanz – most likely an above-ground lab used to prepare centrifuges before they are installed underground – was built in 2013. Work was halted there in 2015 when the Iran nuclear deal was reached, Kamalvandi said, but commenced again when the Trump administration unilaterally withdrew from the agreement in 2018. Britain and other signatories to the Joint Comprehensive Plan of Action remain committed to the deal and have urged Iran to maintain compliance with it.

However, Iran has consistently violated the agreement, with its renewed efforts to develop advanced centrifuges the most significant and potentially serious breach. Last month, the International Atomic Energy Agency said Iran was increasing its stockpiles of enriched uranium. As of 20 May, it reported, Iran’s total stockpile of low-enriched uranium amounted to 1,571.6 kg, up from 1,020.9 kg in February. The JCPOA only allows Iran to keep a stockpile of 202.8 kg. The agency also stated that Iran has also been continuing to enrich uranium to a purity of 4.5 percent, higher than the 3.67 percent allowed under the JCPOA. In March, the IAEA reported that Iran had nearly tripled its stockpile of enriched uranium since November. Iran admitted for the first time last September that it was using advanced centrifuges to enrich uranium. It claims its programme is peaceful and it is not intending to build a nuclear weapon.

Simon Henderson, director of the Bernstein Programme on Gulf and Energy Policy at the Washington Institute for Near East Policy, suggested the Natanz attack was potentially significant in stifling Iran’s nuclear ambitions: “It is doubtful that Iran has an alternative facility. Therefore, production of IR-2ms has stopped and, from Israel’s point of view, the likelihood of Iran obtaining enough highly enriched uranium for its first nuclear weapon has been delayed by months, perhaps even years.” Unnamed sources told Israeli TV reports that the Iranian nuclear programme may have been set back by one or two years.

The 2015 nuclear deal left Iran with an estimated “breakout time” to create a nuclear bomb of about one year. The US’ withdrawal from the deal, in favour of a programme of “maximum pressure” sanctions, and Iran’s successive breaches, are thought to have significantly reduced that breakout time.

The Natanz explosion was one of a series of mysterious incidents – an explosion at a weapons development facility in Parchin, an X-ray lab in Tehran, and a fire at a power station in the southern region of Ahvzaz – over the past week. However, the intelligence official cited by the New York Times suggested Israel had nothing to do with these other incidents and Iran has only pointed the finger of blame at Israel for the Natanz explosion.

Tensions between Israel and Iran have been raised in recent months. Israel continues to be concerned about the Islamic republic’s support for terror groups, such as Hezbollah, and its attempts to assist burnish them with advanced weaponry and missiles. Last month, Israel revealed that it had thwarted an Iranian cyberattack intended to poison the country’s water supply. Israel responded with a cyberattack that disrupted activity for a number of days at the key Shahid Rajaee seaport. The Financial Times quoted an Israel official saying of the attack: “It was small, very small — like a knock on the door… Think of it [as] a gentle reminder. ‘We know where you live.’”

The existence of the underground facility at Natanz was revealed by the National Council of Resistance of Iran in 2002, although it is thought Israel was the ultimate source of the information and “laundered” it through Iranian opposition groups.

After repeated denials of banned facilities, the IAEA was admitted to the country to carry out inspections. Iranian nuclear scientists are believed to have originally built centrifuges based on knowledge and technology supplied by Abdul Qadeer Khan, the so-called father of Pakistan’s nuclear bomb. Khan confessed in 2004 to supplying technology and designs to Iran, North Korea and Libya. In 2009, a further uranium enrichment site at Fordo, near Qom, was revealed.

Alongside the US, Israel worked to sabotage the Iranian nuclear programme, including in 2010 inserting the Stuxnet virus into technology supplied by Siemens for computers running the Natanz centrifuges.