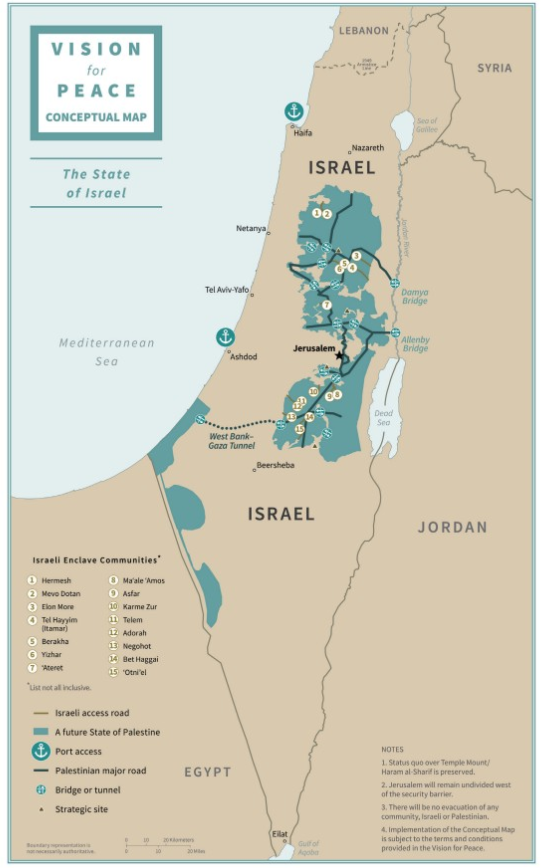 After the conclusion of a “unity government” agreement last week, Netanyahu is guaranteed at least another 18 months as Israel’s prime minister. In that period, he appears determined to try and push through the most controversial element of the US proposals: the annexation by Israel of up to 30 percent of the territory of the West Bank.

That determination was underlined by the fact that, while the agreement between Netanyahu and opposition leader Benny Gantz puts a hold on virtually any action unrelated to tackling the coronavirus pandemic for the first six months of the government’s three-year term, there is one big exception: annexation.

Despite strong international opposition and Gantz’s reticence, Netanyahu insisted that th coalition agreement contained a clause which allowed the prime minister to bring a vote on annexation to the cabinet and the Knesset at any point after 1 July. The agreement also attempts to stop members of Gantz’s rump Blue and White party (the centrist alliance split after the former IDF general went back on his repeated pledges not to serve alongside Netanyahu) from blocking any Knesset committees’ consideration of the proposals.

The reasons for Netanyahu’s apparent hurry are not hard to discern. The long-serving prime minister may now be having visions of his own political mortality: next month, his trial on multiple counts of corruption will begin, while the coalition agreement requires him to hand over the premiership to Gantz (who will serve as his deputy and defence minister in the interim) next autumn. For Netanyahu, annexing parts of the West Bank may seem an appealing legacy (especially if he times it so Gantz is left to clear-up the inevitable negative fall-out). At the same time, Netanyahu is acutely aware that any White House support for annexation will almost certainly disappear if Trump fails to be re-elected in November; itself a less than certain prospect.

There are, however, a number of variables which may shape how and, indeed, whether annexation actually takes place.

The coalition agreement itself doesn’t give Netanyahu a completely blank cheque. It requires Israel to obtain the agreement of the United States and, albeit in less concrete terms, says that Netanyahu and Gantz will undertake “consultations” internationally and “take steps together to advance peace agreements with all our neighbours”. It also speaks of the need to “preserve peace agreements” and indeed to “achieve future peace agreements”.

At first sight, the US position appears clear. Last week, US secretary of state Mike Pompeo said that annexing parts of the West Bank was “ultimately Israel’s decision to make”. However, the US plan launched in January (see illustration) was more ambiguous, linking annexation of Israeli settlements in the West Bank to a requirement that Israel negotiate in parallel with the Palestinians. Moreover, it also said that – with conditions – the remaining 70 percent of the territory of the West Bank should be given over to a Palestinian state.

It is also worth remembering that, when Netanyahu attempted to push ahead with annexation after the Trump plan was first unveiled, he was reined in by president’s son-in-law and author of the proposals, Jared Kushner. The US instead established a joint committee with Israel to draw up maps for any future annexation.

First, will Trump insist – in return for the US agreement to annexation – that Netanyahu also agrees to a Palestinian state (albeit one that is much-reduced from that previously proposed, for instance by Bill Clinton in 2000 and former Israeli prime minister Ehud Olmert in 2008)? In recent days, the State Department appears to have caveated Pompeo’s apparent green light. It suggested that the US is prepared to “recognise Israeli actions to extend Israeli sovereignty … to areas of the West Bank that the [Trump plan] … foresees as being part of the State of Israel”. However, its statement continued, annexation should be “in the context of the Government of Israel agreeing to negotiate with the Palestinians along the lines set forth in President Trump’s Vision”. “The annexation would be in the context of an offer to the Palestinians to achieve statehood based upon specific terms, conditions, territorial dimensions and generous economic support,” the State Department suggested.

Although Netanyahu had endorsed a two-state solution in the past, he has backed away from it over the past five years as his government became more reliant on the support of hardcore, pro-settler parties in the Knesset. The new Israeli government looks set to have a more centrist outlook: aside from Gantz’s party, Labor will be joining the administration while Netanyahu’s former allies in the right-wing Yamina party seem to be flirting with returning to the opposition benches. That said, Netanyahu will not want to stray too far from his political base, especially if he becomes politically weakened as his corruption trial develops.

What does Bibi want?

Second, what will Netanyahu push for in terms of annexation? As David Makovsky of the Washington Institute for Near East Policy has argued, “one key unknown is where exactly the application of sovereignty would occur”. He suggests a number of options, some more controversial than others:

•    In all 128 Israeli settlements (this includes far-flung settlements, deep inside the West Bank which would make the establishment of a viable, contiguous Palestinian state highly problematic);
•    In the Jordan Valley frontier (this strategic corridor between Israel and the border with Jordan is believed to be Netanyahu’s priority);
•    In the 51 settlements that lie inside the West Bank security barrier and abut the 1967 Green Line. Most Israelis resident in the West Bank live in these “settlement blocs” which constitute roughly eight percent of the land. As Makovsky argues, and previous peace plans have suggested, such a move that “could be consistent with a two-state solution if conducted via negotiations and territorial swaps with the Palestinians”.);
•    In a limited number of less controversial settlements adjacent to Israeli urban areas (for instance, Gush Etzion. This has been included as part of Israel in leaked Palestinian maps related to past two-state discussions).

A further related complication, noted President Obama’s former ambassador to Israel, Dan Shapiro, will come with the highly complex, very technical work required by the mapping committee. Thanks to the coronavirus, its work has been much-delayed. What is certain, however, is that Israel’s settler lobby will want to push Netanyahu towards the most expansive definitions of their territory. If Netanyahu gives way to such pressure, that, in turn, would have consequences. “Would Trump, who believes he gave Israel a great deal,” asks the former ambassador, “accept more annexation than his plan envisioned?”

It is, as Shapiro says, not just Trump’s reaction that Netanyahu would need to take into account. Disagreements around mapping could drag the process out beyond the summer. If the Democrat presidential candidate, Joe Biden, continues to lead in the polls, the prime minister will need to consider the potential costs of defying the man who may sit in the Oval Office next January and who had made crystal clear his opposition to unilateral annexation. While annexation may play well among Trump’s evangelical base, furthermore, there is strong opposition in the US Jewish community and among pro-Israel Democrats in Congress. Indeed, even if Netanyahu makes a dash to beat the potential deadline set by November’s presidential election, it’s not clear that Biden would simply accept annexation as a fait accompli if he is victorious.

Both Gantz and his ally, fellow former IDF chief Gabi Ashkenazi, who will serve as foreign minister, have adopted a somewhat lukewarm stance towards annexation. Questioned on Israeli television last weekend, Ashkenazi brushed away questions on his own views and simply said it was “better to influence [the government] from within”. Gantz, too, has repeatedly stressed the need to obtain international backing for annexation and to reach an agreement with the Palestinians on it. Both men are likely to be especially cautious about defying souring relations with a Biden administration.

Opposition from the military

Gantz and Ashkenazi also reflect widespread concern about the implications of annexation in Israel’s security establishment from which they themselves hail. Earlier this month, 220 members of the group Commanders for Israel’s Security – retired Israeli generals and leading figures from Mossad, Shin Bet and the police – signed a newspaper advertisement urging Gantz and Ashkenazi to block annexation.

Three of the group’s members, former Shin Bet director Ami Ayalon, Mossad chief Tamir Pardo, and ex-general Gadi Shamni, outlined their concerns in a piece for Foreign Affairs magazine last week. They argued that annexation endangered a two-state solution, as well as Israel’s peace treaties with Jordan and Egypt and the emerging détente between it and the Gulf states. As they highlighted, Egypt plays acts as the primary intermediary between Israel and Hamas and the two countries also coordinate against IS and Al Qaeda in the Sinai Peninsula. Jordan’s vast territory provides Israel with crucial strategic depth and is a buffer when it comes to Iran, which is committed to the Jewish state’s destruction. The response of Jordan, Egypt and the Gulf states to annexation – all themselves important US allies in the Middle East – is, moreover, likely to be shaped by concerns on their part about potential domestic anger and unrest.

Indeed, it is the clause in the coalition agreement relating to the peace agreements with Israel and Jordan which Itzik Shmuli, a Labor MK who is set to be appointed to the new government, insists will prevent annexation from happening. In an interview with Israeli radio at the weekend, he said that Netanyahu could propose annexation to the cabinet, but Article 28 of the agreement sets “impossible conditions” for approving such a proposal, “like complying with the terms of the treaty with Jordan or not undermining regional stability”.

As Ayalon, Pardo, and Shamni strongly argued, unilateral annexation also puts at risk vital security cooperation between Israel and the Palestinian Authority, potentially creating a vacuum which could be filled by Hamas and open the door to the ultimate disaster: Israel being forced to reoccupy the entire West Bank and Gaza. “Israel’s military would be the sole entity ruling over millions of Palestinians – with no exit strategy,” they warned.

Unsurprisingly, given the depth of disquiet in many parts of the Israeli military and security forces, it is thought that Gantz may insist on some of its representatives joining the US-Israel mapping group.

The final wild card is Netanyahu himself. The prime minister’s rhetorical enthusiasm for annexation is not new, and, by helping him to cement his position as the undisputed leader of the Israeli right, it has served him well politically. Is, though, Netanyahu ready yet to give up this political trump card? It is indeed noteworthy that, in the coalition agreement, Netanyahu has ensured that he alone has the power to propose legislation related to annexation. “The key to annexation was and remains in Netanyahu’s hands,” Haaretz diplomatic correspondent Noa Landau wrote this week. “It remains to figure out whether he will let it slip by as he has done for years, now that Gantz is serving as the excuse, or if this time, it’s not a drill?”

LFI unequivocally opposes any Israeli annexation in the West Bank. Unilateral steps are a barrier to peace. Progressives who support a two-state solution must now redouble our efforts to fight any measures that make this vital goal harder to achieve.