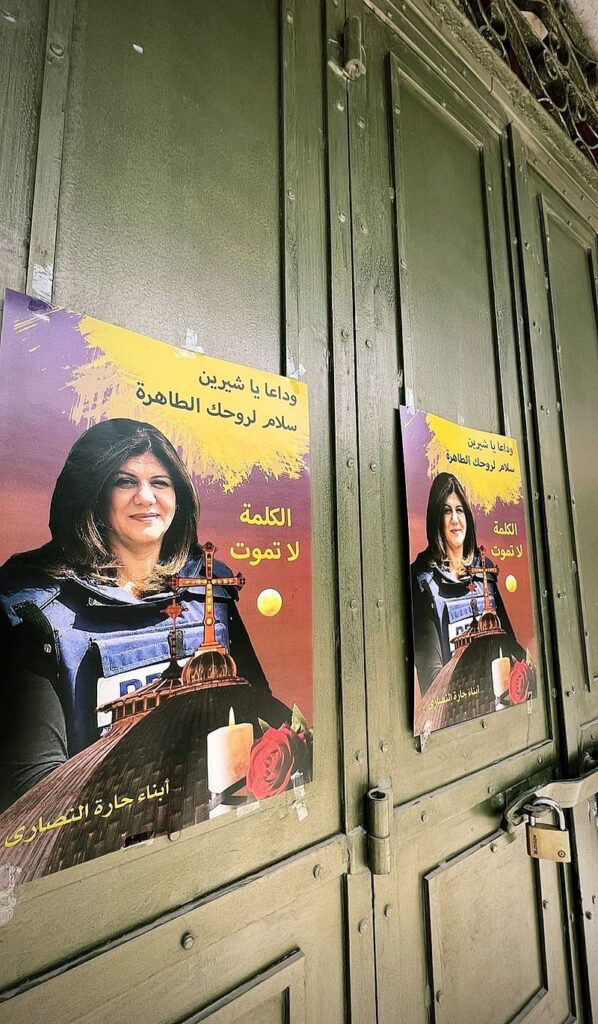 Palestinians marked “Nakba Day” on Sunday – an annual commemoration of the “catastrophe” of the establishment of the State of Israel – amid high tensions following weeks of clashes at the Temple Mount/Al Aqsa compound and the killing of Al Jazeera journalist Shireen Abu Akleh last Wednesday.

“The voice of Palestine”

Abu Akleh – dubbed the “voice of Palestine” – had worked for Al Jazeera for 25 years, building a reputation for fairness and courage, and as symbol of a strong Palestinian woman across the Arab world.

Both the PA and Israel are investigating how Abu Akleh – who was wearing a flak jacket and helmet which identified her as press – came to be shot during the IDF raid in Jenin. The raid was part of ongoing operations in the West Bank by Israeli forces to stem a series of terror attacks which have killed 19 Israelis over the past two months. Both Abu Akleh’s employers – Qatar-based Al Jazeera – and Abbas have blamed Israel.

A Dutch-based international consortium of researchers, Bellingcat, has published the first of a number of independent investigations which commenced after last week’s events. Its analysis of open-source video and audio evidence gathered on social media came from both Palestinian and Israeli military sources. It examined such factors as time stamps, the locations of the videos, shadows and a forensic audio analysis of gunshots. Although Bellingcat researchers say that the absence of evidence – such as the bullet, weapons used by the army and the IDF’s GPS locations – made it impossible to reach conclusions with 100% certainty, it is clear that Palestinian gunmen and Israeli soldiers were both in the area where Abu Akleh was shot. “Based on what we were able to review, the IDF were in the closest position and had the clearest line of sight to Abu Akleh,” said Giancarlo Fiorella, the lead Bellingcat researcher, thus confirming some witness accounts. The Israeli human rights group, B’Tselem, also said it has begun gathering witness testimony. Its research showing that gunmen were some 300 metres away from where Abu Akleh was shot, separated by a series of walls and alleyways, led the IDF to row back on its initial claims that Palestinian militants may have inadvertently killed the journalist. However, B’Tselem says it hasn’t yet reached a conclusion as to who was responsible for the fatal shot.

Despite the high tensions, “Nakba Day” passed off largely without incident, although the arrest of a 22-year-old Palestinian carrying an axe and a suicide note underlined the continuing threat of terror attacks.

In his address to mark “Nakba Day”, the Palestinian president adopted a hardline stance. Abbas vowed to continue the “pay for slay” policy, by which the PA pays salaries to prisoners serving time in Israeli prisons for terrorist offences, while also making payments to the families of “martyrs”. He also pledged not to row back on the Palestinians’ historic claim of a “right to return” under which the descendants of refugees who left the new Jewish homeland in 1948 would be allowed to return to their relatives’ former homes in Israel even after the establishment of an independent Palestinian state. Ahmed Abu Holy, head of the PLO’s refugee department, added that the Palestinians would not accept “partial solutions” to the problem of the refugees. In its “Nakba Day” statement, Hamas said Israel has “no legitimacy or sovereignty … over one inch of the land of historic Palestine”. “Our people will remain committed to Jerusalem, the eternal capital of Palestine, from the [Jordan] river to the [Mediterranean] sea,” it said.

Continuing doubts about the long-term stability of the Israeli government; the battle to succeed Abbas; and the division of the Palestinian territories between Hamas-dominated Gaza and the Fatah-led West Bank provide an inauspicious backdrop as a series of contentious and symbolic dates – including Jerusalem Day on 29 May and the anniversaries of the Six Day War, the First Lebanon War and Hamas’ coup in Gaza in early June – loom over the next few weeks.