Shadow Foreign Secretary Rt Hon Douglas Alexander MP addressed the Labour Friends of Israel Annual Lunch on Tuesday (2 July) and asserted that Israel’s existence should be celebrated as a progressive cause. He denounced the boycott movement as an obstacle to a peaceful two state solution, and said that we should be seeking stronger ties with Israel. He was also unequivocal in his support of a two state solution, arguing that it was is “fantasy to think a one state solution could ever be sustainable or consistent with Israel’s democratic values.” 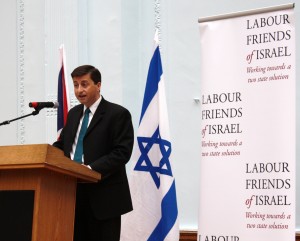 As keynote speaker to over 250 LFI guests, including many members of the shadow cabinet and the PLP, Douglas Alexander argued that, rather than merely asserting Israel’s right to exist, we should be celebrating the country’s existence. Describing how Israel has been “imbued from the very beginning with a progressive spirit,” he went on to outline its achievements:

“Despite facing existential dangers, Israel built a vibrant democracy, a welfare state that supported its poor, strong and well organised independent trade unions, a critical, free and unfettered press, and an independent judiciary.

“It has built an economy so vibrant and innovative that Eric Schmidt, head of Google recently called Israel – and this is a direct quote, ‘the most important high tech centre in the world outside of the United States.’’

Reiterating Labour’s firm opposition to boycotts, the shadow foreign secretary called for anti-Israel activists to “desist from a language of de-legitimisation [and] stop the movement to sever academic and trade union ties,” adding that: “now is the time to deepen, and not to weaken, our economic and cultural ties across the region.” 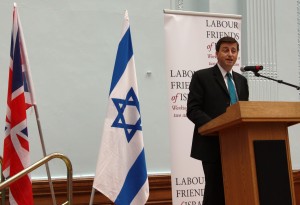 As well as describing Israel’s achievements, Douglas Alexander also addressed its many challenges, foremost amongst these being the “unprecedented uncertainty across the Middle East,” including the turmoil in Egypt and the conflict in Syria. He also highlighted the threat posed by Iran, which “exports terrorism not just to the borders of Israel but right around the world,” and described the possibility of it gaining nuclear weapons as “threat to all nations.” 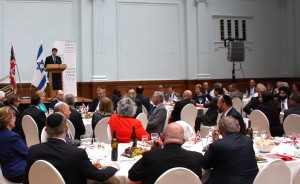 On the Israeli-Palestinian conflict, he raised his opposition to settlement expansion and the threat to daily life in southern Israel posed by Hamas’ missile attacks, and asserted that both sides must make difficult compromises to achieve a two state solution, for the sake of both Israelis and Palestinians. He added that: “For me, my support for peace and support for Israel are synonymous, not incongruous. I support a two state solution, in no small measure, because I support the State of Israel.”

Also speaking at the LFI lunch were new LFI Chair Rt Hon Anne McGuire MP, Israeli Ambassador Daniel Taub, LFI Vice Chairs Michael Dugher and Michael McCann, and LFI Chair in the House of Lords Baroness Ramsay. Speaking after the lunch, LFI Director Jennifer Gerber said: “It was fantastic to see such a large turnout at our lunch, including so many supportive Labour MPs and Peers. Their presence, and the warm and thoughtful words from Douglas Alexander, demonstrate that support for the State of Israel remains strong within the Labour Party. In the months ahead, LFI will continue to broaden and deepen the relationship between the Labour Party and Israel.”

Please follow these links for coverage of Douglas Alexander’s speech in the media: