Shadow Chancellor Rt Hon Ed Balls MP visited Israel and the Palestinian territories this week with Labour Friends of Israel, and called for the economic partnership between Britain and Israel to be celebrated, and for Israelis and Palestinians to develop closer business links with each other. 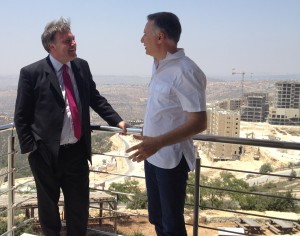 Describing the visit as “inspiring and challenging,” Ed Balls met with a range of Israeli and Palestinian politicians, including Israeli Finance Minister Yair Lapid, and asserted that active partnerships between businesses, universities and government are the right way forward, not boycotts. The visit followed Ed Balls’ announcement in July last year of the Labour UK-Israel Economic Dialogue.

Ed Balls praised the “strength and dynamism” of Israeli innovation and urged British companies to increase their business links with the country. To learn more about the Israeli economy, Ed also met with former Governor of the Bank of Israel Stanley Fischer, Professor Eugene Kandel, head of the Israeli Prime Minister’s National Economic Council, and Chief Scientist Avi Hasson. In addition, writing in the Jerusalem Post newspaper, the shadow chancellor said that in his meeting with Israeli Labour party MKs Isaac Herozg, Hilik Bar and Nachman Shai they “discussed the shared challenge of keeping government spending under control while boosting economic growth [and] how, as we make very difficult cuts, we can create an economy that works for the many, not the few.”

Ed Balls also praised Israel’s innovative hi-tech industry, and met with British Ambassador Matthew Gould and his embassy’s UK-Israel Tech Hub team, to explore the work they are doing to enhance collaboration between the two economies. Following the meeting, the shadow chancellor said that: “Britain is now Israel’s biggest export market in the world after the US, with two-way trade in goods and services now over $8 billion a year. Too often in the UK, when our bilateral relations are discussed, loud voices from the margins of the debate disproportionally skew the conversation with calls for boycotts of Israel. In the British Labour Party, we reject boycotts and those who seek to weaken economic, trade union, intellectual and cultural ties.”

Ed Balls also called for progress towards a negotiated two state solution, asserting that: “I fervently hope that US Secretary of State John Kerry will succeed, despite the great challenges ahead, in bringing the Israeli and Palestinian leaderships together. It will require determined effort, leadership and tolerance on all sides.” In the West Bank, the shadow chancellor met with senior Palestinian politicians including Dr Mohammad Mustafa, the Palestinian Deputy Prime Minister, to discuss the economic situation. He also visited the ground-breaking new Palestinian city of Rawabi being constructed near Ramallah, the largest private sector project in Palestinian history, and met with the Middle East Quartet team to discuss international efforts to improve Palestinian movement and access.

Following the visit, Ed Balls said: “This was the first time I’ve been back in Ramallah for six years. The development was striking. The fact they have got to this stage is already a massive achievement.” He added that “the Palestinians are facing big issues around the complexity of movement, water and power from Israel. It is in Israel’s interests to give more on the economy. There could be massive opportunities. A strong Palestinian economy is in everyone’s best interests.”

During the visit, the shadow chancellor visited Jerusalem’s Yad Vashem Holocaust Memorial Museum, and laid a wreath in the Hall of Remembrance. On his return, he criticised the way in which the Liberal Democrats had dealt with David Ward MP who, ahead of Holocaust Memorial Day this year, accused “the Jews” of “inflicting atrocities on Palestinians.” David Ward has since had the party whip withdrawn for tweeting that Israel is an “apartheid state,” with the party leadership saying they will review their decision in September.