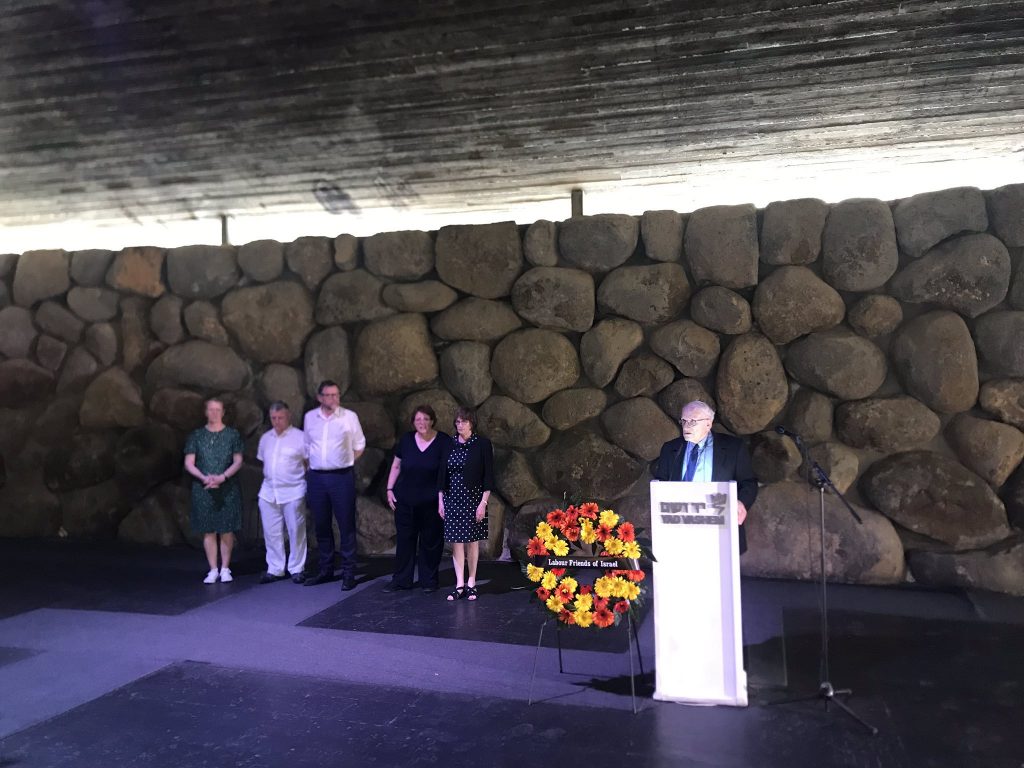 The group began their fact-finding visit in Jerusalem with a visit to Yad Vashem and a walking tour of the Old City. At Yad Vashem, the MPs paid their respects to the victims of the Holocaust. At the Hall of Remembrance, Ms Ellman laid a wreath in memory of those who perished.

In the Old City, the group visited the holy sites, including the Western Wall and the Church of the Holy Sepulchre, as well as seeing the traditional historic market areas and sampling the local cuisine. They also received briefings on the history of the holy basin and how the geography of the Old City is intricately wrapped up in the politics of the peace process.

During the week, meetings with both Israeli and Palestinian ministers took place. Israeli minister for regional cooperation, Tzachi Hanegbi, met with the group in Jerusalem to discuss UK-Israel relations and the work his ministry is doing to further cooperation with Israel’s neighbours. The delegation then visited the Palestinian Territories to meet with the Palestinian Authority in Ramallah. At the Palestinian Ministry of Foreign Affairs, Dr Amal Jadou, PA assistant minister for European affairs, briefed the group on Palestinian politics, the peace process and regional developments. Both meetings provided important opportunities for the MPs to raise LFI’s support for a two-state solution as the only peaceful resolution to the Israeli-Palestinian conflict.

LFI has been a long-standing supporter of coexistence projects and we met with two on this delegation. The group had the unique opportunity to visit a MEET – Middle East Entrepreneurs of Tomorrow – summer school in action in Jerusalem. The summer schools bring young Israelis and Palestinians together to learn tech and entrepreneurial skills in the spirit of peace and reconciliation. As well as speaking to students and instructors, we met with Haim Erlich, MEET CEO, who explained about the funding challenges facing MEET following the Trump administration’s decision to end all funding for coexistence groups.

In Holon, just south of Tel Aviv, the delegation visited Save A Child’s Heart. SACH perform life-saving operations on children with cardiac conditions, as well as providing training for doctors and nurses from developing countries. At the Wolfson Medical Centre, we met with two of SACH’s doctors, one of whom lived in Gaza and the other in Israel, who had worked together for decades. The MPs also visited SACH’s children’s home where children are housed before and after their operations, and were able to speak to the children and their parents about their experiences.

The group met with David Horovitz, editor of the Times of Israel, for a briefing on the state of play in Israeli politics, as well as an opportunity to discuss important developments in the UK-Israel relationship. They also met with Abie Moses, National Chairman for the Organisation of Victims of Terrorism and Major General (ret) Gadi Shamni, to learn about the work their organisation does to support Israeli victims of terrorism.

We visited the south of Israel to learn about the security issues related to the Gaza border and what life is like for the Israeli communities living under the constant threat of rocket attacks. At Nir Oz, the MPs had a tour of the Kibbutz and spoke to those who have been victims of Hamas terror attacks which have hit Nir Oz over 100 times in recent years. There was also an opportunity to learn about the history of the Kibbutz movement and Israel’s socialist foundations. At the Gaza border, we received a briefing on the challenges facing Israelis and Palestinians living on both sides of the border.

On the last day of the delegation, the group visited the Peres Center for Peace and Innovation. During a meeting with the Center’s director of international affairs, Nadav Tamir, we learned about the late Shimon Peres’s work supporting coexistence and campaigning for peace. A tour of the Center told the story of Israel’s “start-up nation” and how innovation helped make the Jewish state a world leader in technology. Afterwards, we met with the new British ambassador to Israel, HMA Neil Wigan. The meeting provided a good opportunity to recap on the week and discuss what the MPs can do to continue to support a two-state solution and promote the UK-Israel bilateral relationship.